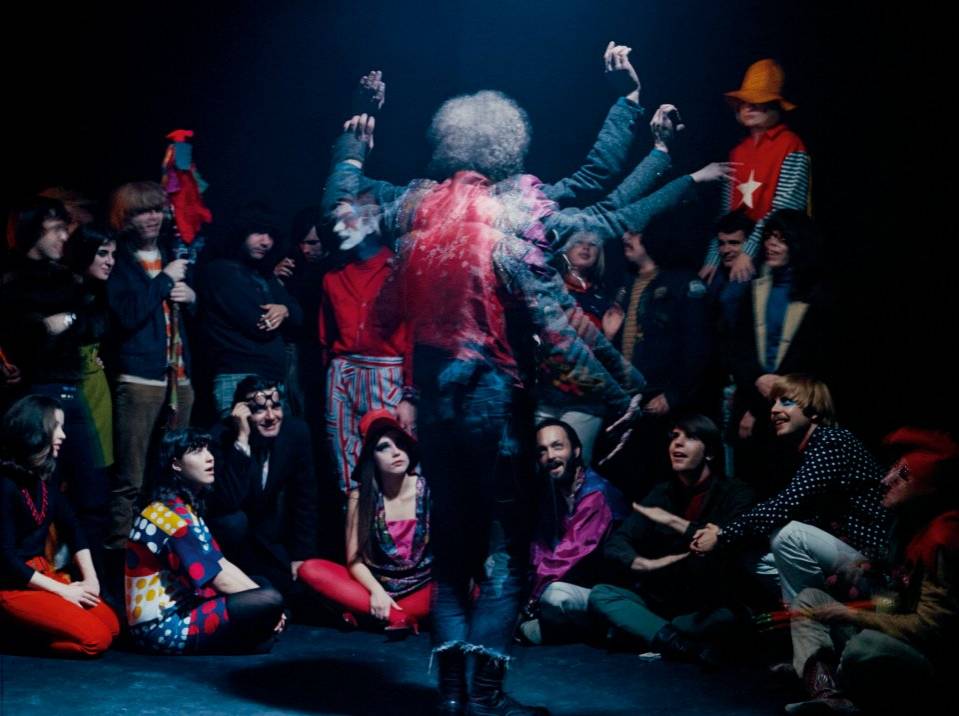 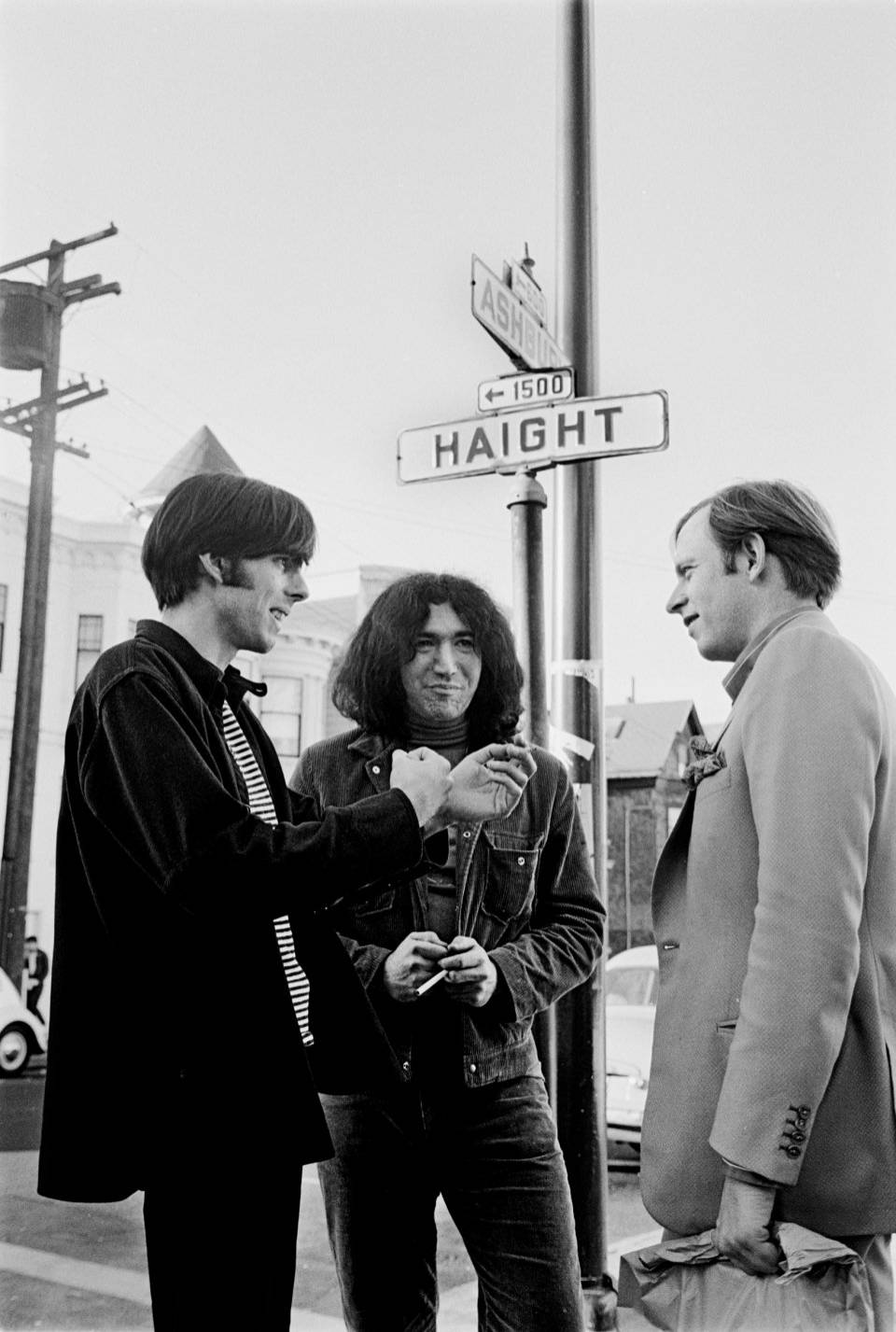 Tom Wolfe’s generation-defining ride through 60s psychedelia, published in letterpress with ephemera from the acid era and photographs from Lawrence Schiller and Ted Streshinsky.

That’s good thinking there, Cool Breeze. Cool Breeze is a kid with three or four days’ beard sitting next to me on the stamped metal bottom of the open back part of a pickup truck. Bouncing along. Dipping and rising and rolling on these rotten springs like a boat. Out the back of the truck the city of San Francisco is bouncing down the hill, all those endless staggers of bay windows, slums with a view, bouncing and streaming down the hill. One after another, electric signs with neon martini glasses lit up on them, the San Francisco symbol of “bar”—thousands of neon-magenta martini glasses bouncing and streaming down the hill, and beneath them hundreds, thousands of people wheeling around to look at this freaking crazed truck we’re in, their white faces erupting from their lapels like marshmallows—streaming and bouncing down the hill—and God knows they’ve got plenty to look at.

That’s why it strikes me as funny when Cool Breeze says very seriously over the whole roar of the thing, “I don’t know— when Kesey gets out I don’t know if I can come around the Warehouse.” “Why not?” “Well, like the cops are going to be coming around like all feisty, and I’m on probation, so I don’t know.” Well, that’s good thinking there, Cool Breeze. Don’t rouse the bastids.

Lie low— like right now. Right now Cool Breeze is so terrified of the law he is sitting up in plain view of thousands of already startled citizens wearing some kind of Seven Dwarfs Black Forest gnome’s hat covered in feathers and fluorescent colors. Kneeling in the truck, facing us, also in plain view, is a half– Ottawa Indian girl named Lois Jennings, with her head thrown back and a radiant look on her face. Also a blazing silver disk in the middle of her forehead alternately exploding with light when the sun hits it or sending off rainbows from the diffraction lines in it. And, oh yeah, there’s a longbarreled Colt .45 revolver in her hand, only nobody on the street can tell it’s a cap pistol as she pegs away, kheeew, kheeew, at the erupting marshmallow faces like Debra Paget in… in… —Kesey’s coming out of jail!…

And the truck heaves and billows, blazing silver red and Day-Glo, and I doubt seriously, Cool Breeze, that there is a single cop in all of San Francisco today who does not know that this crazed vehicle is a guerrilla patrol from the dread LSD.

The heads have a thing about shoes. The worst are shiny black shoes with shoelaces in them. The hierarchy ascends from there, although practically all lowcut shoes are unhip, from there on up to the boots the heads like, light, fanciful boots, English boots of the mod variety, if that is all they can get, but better something like hand-tooled Mexican boots with Caliente Dude Triple A toes on them. So see the FBI—black—shiny—laced up—FBI shoes— when the FBI finally grabbed Kesey— There is another girl in the back of the truck, a dark little girl with thick black hair, called Black Maria. She looks Mexican, but she says to me in straight soft Californian: “When is your birthday?” “March 2.” “Pisces,” she says. And then: “I would never take you for a Pisces.” “Why?” “You seem too… solid for a Pisces.” But I know she means stolid. I am beginning to feel stolid. Back in New York City, Black Maria, I tell you, I am even known as something of a dude. But somehow a blue silk blazer and a big tie with clowns on it and… a… pair of shiny lowcut black shoes don’t set them all to doing the Varsity Rag in the head world in San Francisco…

Meantime, miraculously, Kesey’s three young lawyers, Pat Hallinan, Brian Rohan, and Paul Robertson, were about to get Kesey out on bail. They assured the judges, in San Mateo and San Francisco, that Mr. Kesey had a very public-spirited project in mind. He had returned from exile for the express purpose of calling a huge meeting of heads and hippies at Winterland Arena in San Francisco in order to tell The Youth to stop taking LSD because it was dangerous and might french fry their brains, etc. It was going to be an “acid graduation” ceremony. They should go “beyond acid.”… At the same time, six of Kesey’s close friends in the Palo Alto area had put their homes up as security for a total of $ 35,000 bail with the San Mateo County court. I suppose the courts figured they had Kesey either way. If he jumped bail now, it would be such a dirty trick on his friends, costing them their homes, that Kesey would be discredited as a drug apostle or anything else. If he didn’t, he would be obliged to give his talk to The Youth—and so much the better. In any case, Kesey was coming out.

This script was not very popular in Haight- Ashbury, however. I soon found out that the head life in San Francisco was already such a big thing that Kesey’s return and his acid graduation plan were causing the heads’ first big political crisis. All eyes were on Kesey and his group, known as the Merry Pranksters.

Thousands of kids were moving into San Francisco for a life based on LSD and the psychedelic thing. Thing was the major abstract word in Haight-Ashbury. It could mean anything, isms, life styles, habits, leanings, causes, sexual organs; thing and freak; freak referred to styles and obsessions, as in “Stewart Brand is an Indian freak” or “the zodiac—that’s her freak,” or just to heads in costume. It wasn’t a negative word. Anyway, just a couple of weeks before, the heads had held their first big “be-in” in Golden Gate Park, at the foot of the hill leading up into Haight-Ashbury, in mock observance of the day LSD became illegal in California. This was a gathering of all the tribes, all the communal groups. All the freaks came and did their thing. A head named Michael Bowen started it, and thousands of them piled in, in high costume, ringing bells, chanting, dancing ecstatically, blowing their minds one way and another and making their favorite satiric gestures to the cops, handing them flowers, burying the bastids in tender fruity petals of love.

Oh christ, Tom, the thing was fantastic, a freaking mind-blower, thousands of high-loving heads out there messing up the minds of the cops and everybody else in a fiesta of love and euphoria. Even Kesey, who was still on the run then, had brazened on in and mingled with the crowd for a while, and they were all one, even Kesey—and now all of a sudden here he is, in the hands of the FBI and other supercops, the biggest name in The Life, Kesey, announcing that it is time to “graduate from acid.” And what the hell is this, a copout or what? The Stop Kesey movement was beginning even within the hip world. 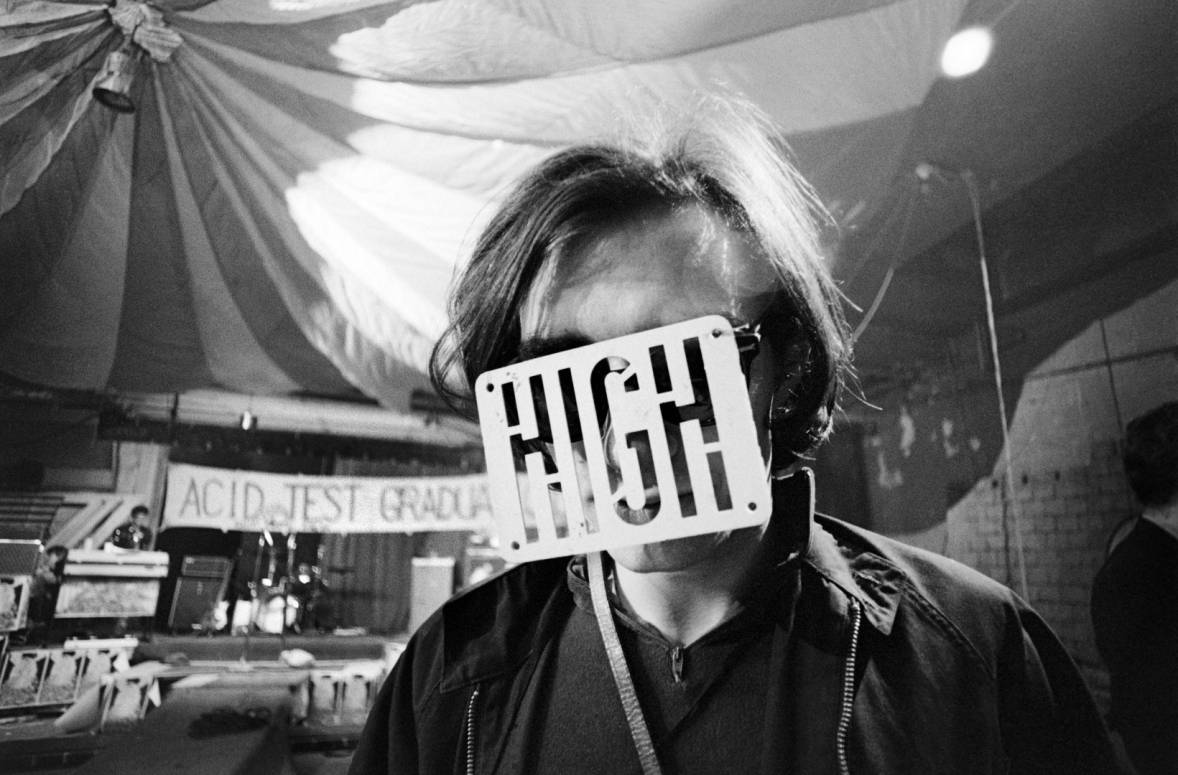 We pull up to the Warehouse in the crazed truck and—well, for a start, I begin to see that people like Lois and Stewart and Black Maria are the restrained, reflective wing of the Merry Pranksters. The Warehouse is on Harriet Street, between Howard and Folsom.

Like most of San Francisco, Harriet Street is a lot of wooden buildings with bay windows all painted white. But Harriet Street is in San Francisco’s Skid Row area, and despite all the paint, it looks like about forty winos crawled off in the shadows and died and turned black and bloated and exploded, sending forth a stream of spirochetes that got into every board, every strip, every crack, every splinter, every flecking flake of paint. The Warehouse actually turns out to be the ground-floor garage of an abandoned hotel. Its last commercial use was as a pie factory…

I make out a school bus… glowing orange, green, magenta, lavender, chlorine blue, every fluorescent pastel imaginable in thousands of designs, both large and small, like a cross between Fernand Léger and Dr. Strange, roaring together and vibrating off each other as if somebody had given Hieronymus Bosch fifty buckets of Day- Glo paint and a 1939 International Harvester school bus and told him to go to it. On the floor by the bus is a 15-foot banner reading ACID TEST GRADUATION.

© 1968/2016 Tom Wolfe. All rights reserved. Adapted from the original 1968 edition published by Farrar, Straus and Giroux. 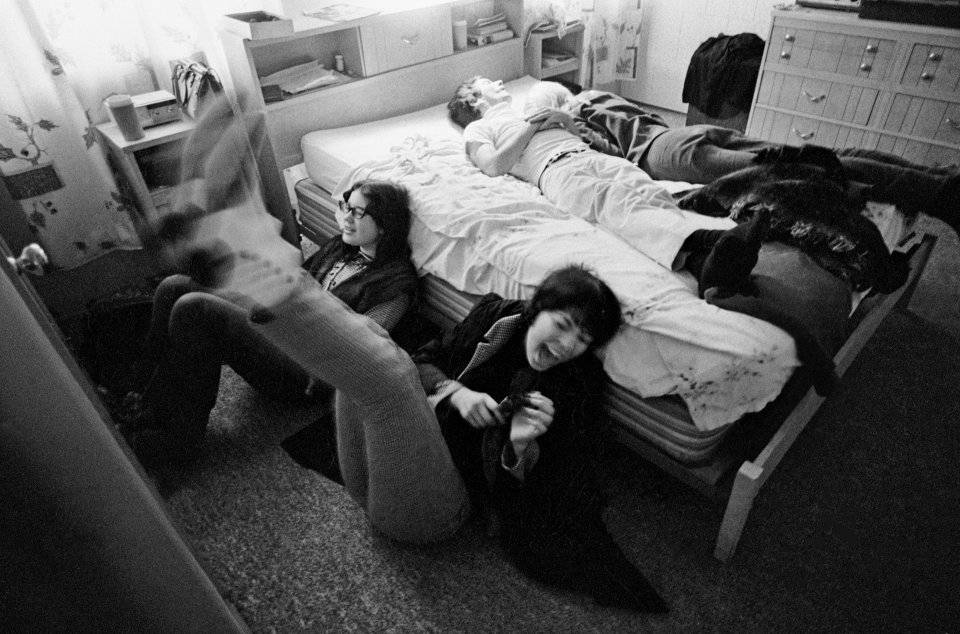 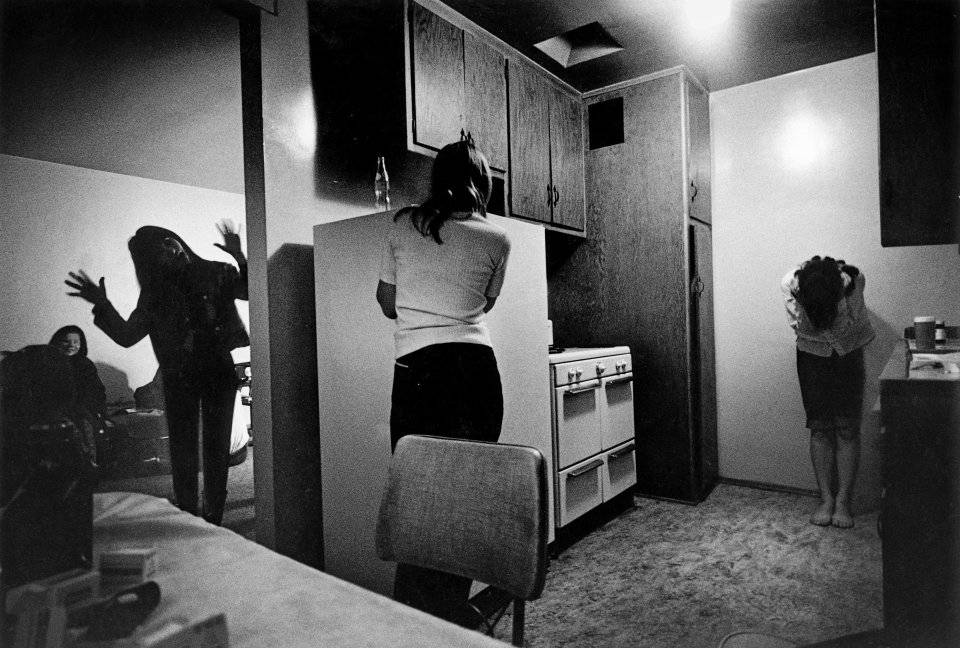 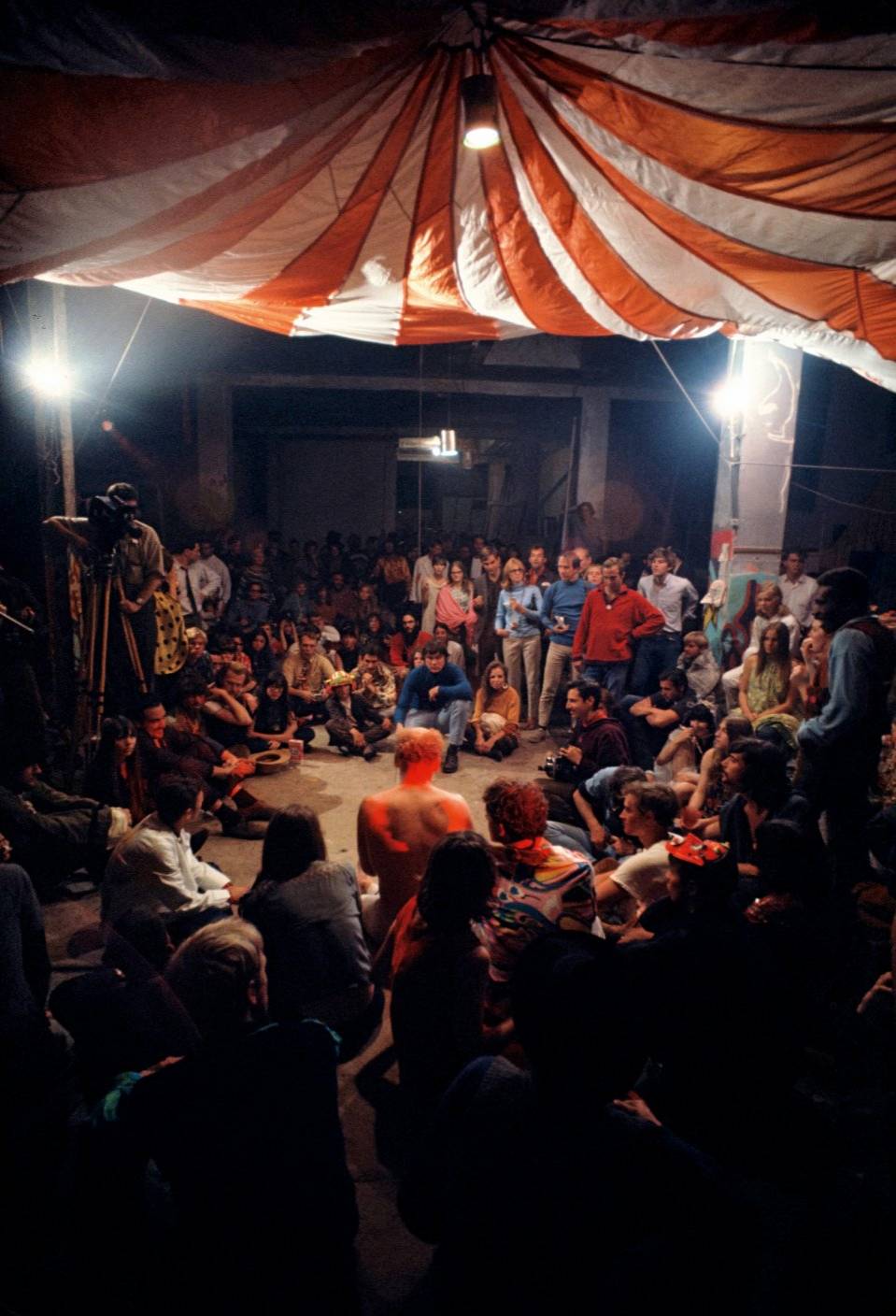 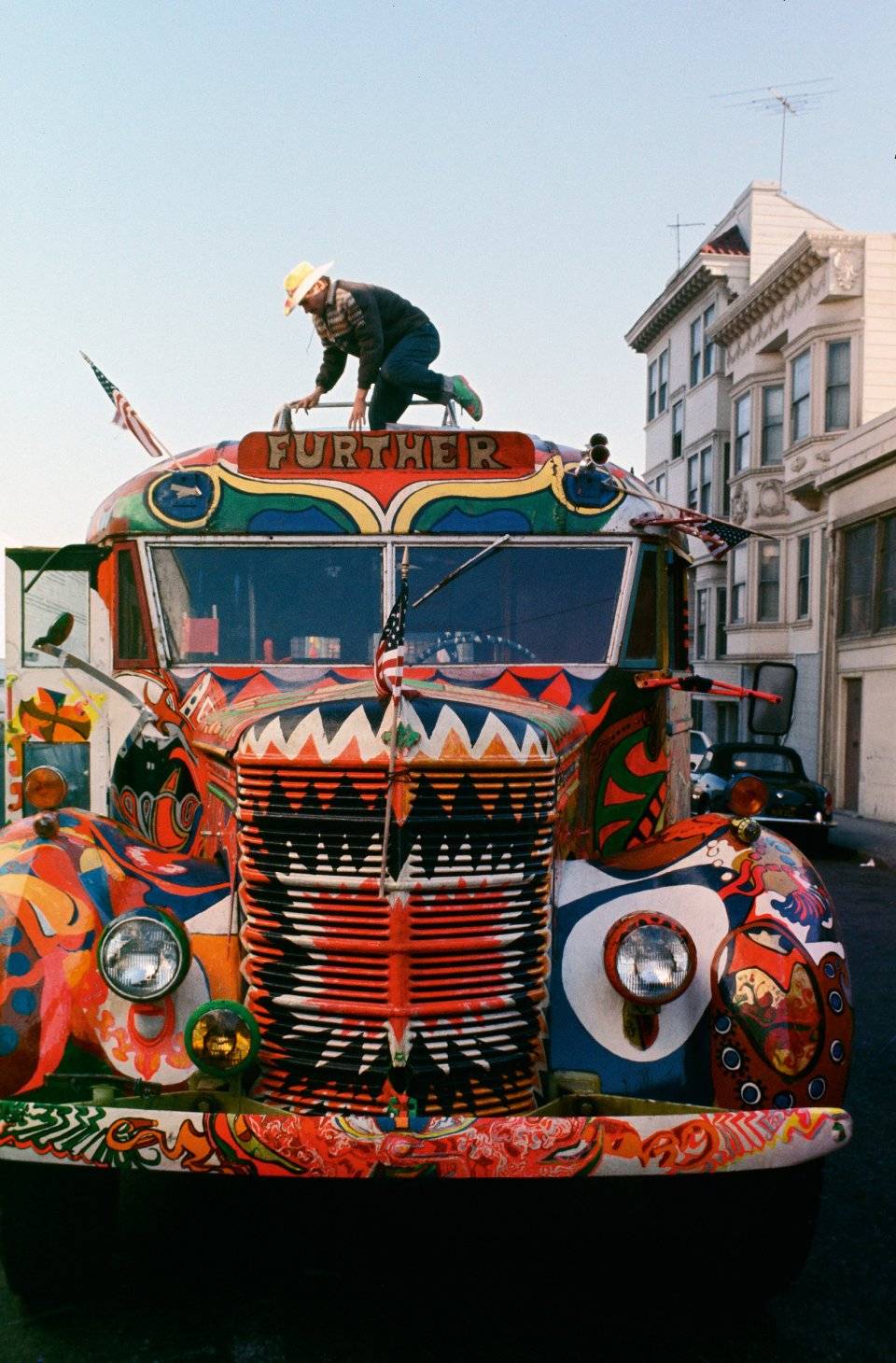 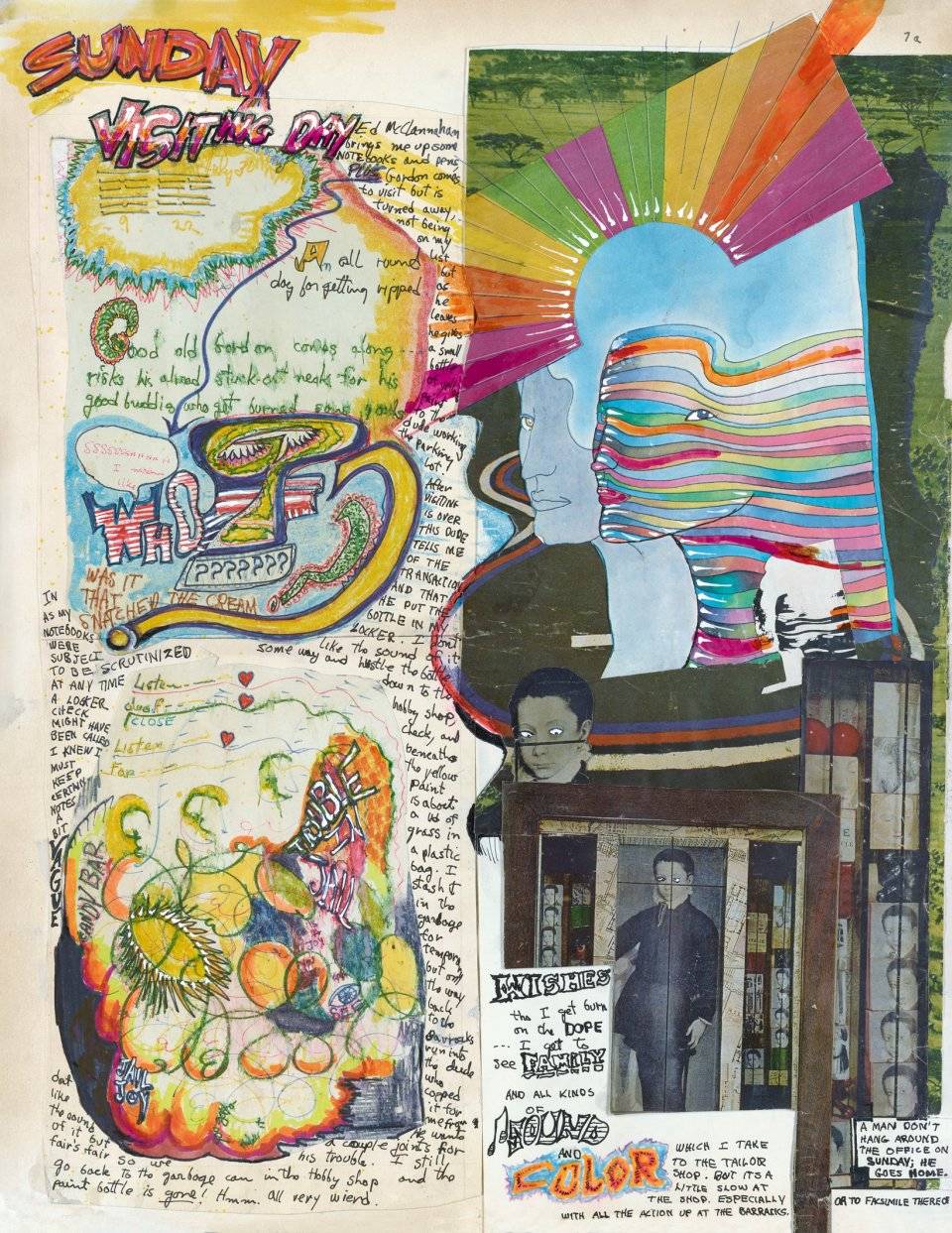 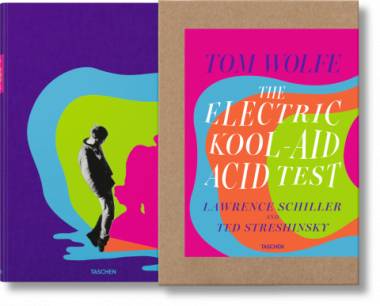