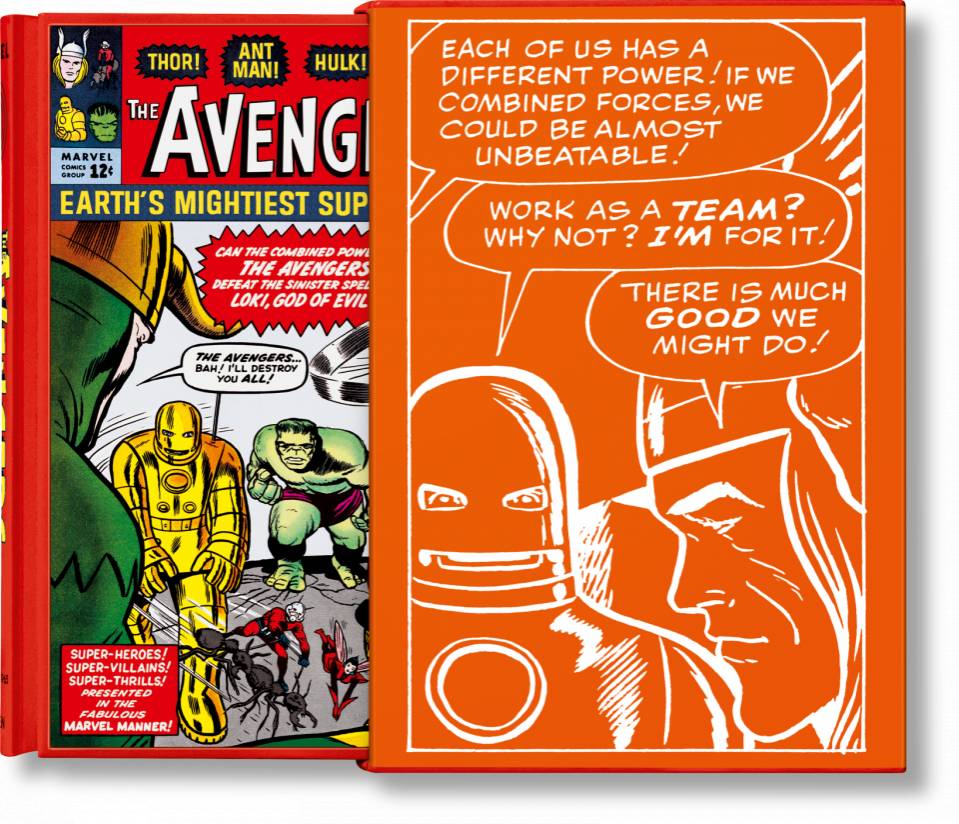 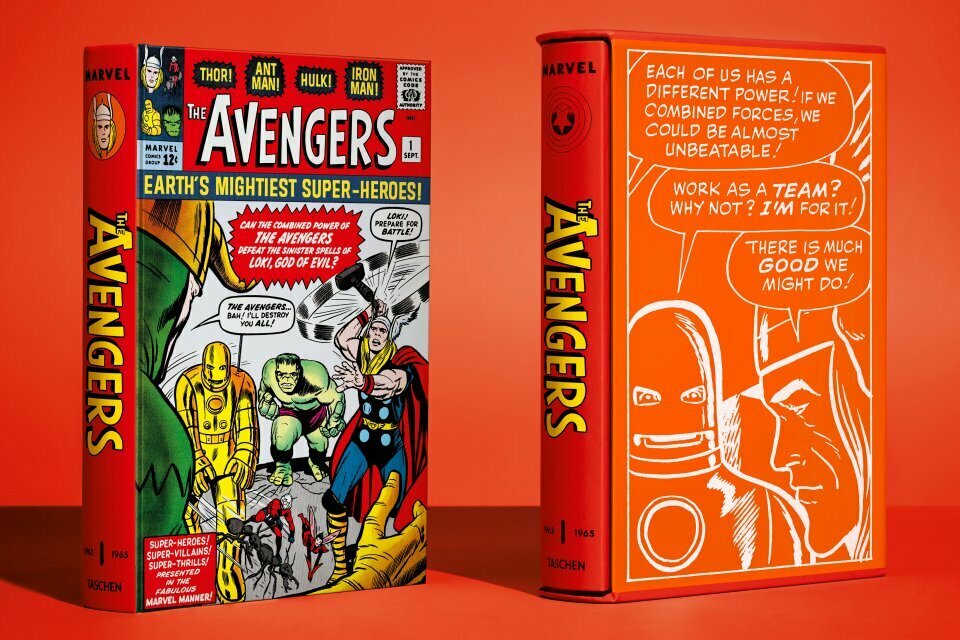 “These comics are a deep well that has been drawn upon for some of the greatest stories of our time.”

“These extra-large format recreations of the early issues will delight serious collectors.”

Edition of 1,000
Aluminum print cover tipped into a leatherette-bound spine, foil embossing, and housed in a slipcase, 11 x 15.6 in., 10.29 lb, 630 pages
US$ 600
Please register with your email address here and we will notify you when copies become available:
Super-hero teams had been around since the 1940s, but Thor, Ant Man, the Wasp, Hulk, and Iron Man broke new ground when they joined forces to form the Avengers in 1963. They not only fought together, they occasionally fought each other! The first 20 stories from the Avengers are collected in this Hulk-sized volume and have been meticulously photographed from the most pristine copies of these rare comic books—a fine art celebration worthy of Tony Stark’s library.

By early 1963 the foundations of the Marvel Age had been laid. Following the introduction of the Fantastic Four in 1961 came the amazing (Spider-Man), the astonishing (Ant-Man), the strange (Doctor, that is), the incredible (Hulk), the invincible (Iron Man) and the mighty (Thor). Still, Marvel editor in chief Stan Lee realized something was missing. “I was writing these characters and I thought it would fun to put them together in a team,” he recalled. So Lee and artist Jack Kirby assembled Iron Man, Ant-Man and the Wasp, Thor, and the Hulk to create the Avengers.

Right away it was clear this team was different. If the Fantastic Four were family, then the Avengers were the co-workers you didn’t choose. Not everyone got along—the Hulk fought with everyone—but working together they could defeat the baddest of Marvel’s bad guys, like Loki, Kang the Conqueror, the Masters of Evil, and Immortus. The lineup was ever changing: The Hulk departed, Captain America joined, and Ant-Man grew up to become Giant-Man. Then, remarkably, villains Hawkeye, Quicksilver, and the Scarlet Witch became heroes—and Avengers—and the group’s founding members shockingly departed, leaving Captain America to lead the newly-minted heroes.

Relive the classic early adventures of Avengers Nos. 1–20 in an XXL-sized edition that’s bigger than the Hulk’s fist, weightier than Thor’s hammer, and with more extras than Iron Man’s armor. TASCHEN has attempted to create an ideal representation of these books as they were produced at the time of publication. The most pristine pedigreed comics have been cracked open and photographed for reproduction in close collaboration with Marvel and the Certified Guaranty Company. Each page has been photographed as printed more than half a century ago, then digitally remastered using modern retouching techniques to correct problems with the era’s inexpensive, imperfect printing—as if hot off of a world-class 1960s printing press.

Accompanying the stories are an original foreword by Marvel Studios President Kevin Feige and an in-depth history by the Eisner Award-winning writer Kurt Busiek that’s illustrated with original art, little-seen photographs, and rare documents. This mighty collection about Earth’s Mightiest Heroes is worthy of Tony Stark’s library—or yours.

This deluxe volume features an aluminum print cover tipped into a leatherette-bound spine, foil embossing, and is housed in a slipcase.

Kurt Busiek has been writing comic books since 1982. He has written several series for Marvel, including The Avengers, and won acclaim for his work on the four-issue miniseries Marvels. In 1995 he launched his own super hero multiverse with his series Astro City.

Kevin Feige, President, Marvel Studios, and Chief Creative Officer, Marvel, has been the driving creative force behind the Marvel Cinematic Universe. He is a hands-on producer, responsible for all 23 interconnected feature films in the MCU.

Stan Lee (1922–2018) is known to millions as the man whose super heroes propelled Marvel to its preeminent position in the comic book industry. His co-creations include Spider-Man, The Incredible Hulk, X-Men, The Fantastic Four, Iron Man, and hundreds of others. While the Chairman Emeritus of Marvel, he was also the Chief Creative Officer of POW! Entertainment, where he created numerous new characters and stories in areas including publishing, film, TV reality, stage, documentary, and multimedia.

Jack Kirby (1917–1994) was one of comics’ most legendary and prolific artists whose notable co-creations include Captain America, Avengers, X-Men, Incredible Hulk, Ant-Man, S.H.I.E.L.D., and Thor.

Edition of 1,000
Kurt Busiek, Kevin Feige, Stan Lee, Jack Kirby
Aluminum print cover tipped into a leatherette-bound spine, foil embossing, and housed in a slipcase, 11 x 15.6 in., 10.29 lb, 630 pages
MARVEL COMICS LIBRARY is an exclusive, long-term collaboration between TASCHEN and Marvel. The rarest classic comics, including Spider-Man, Avengers, and Captain America are meticulously reproduced in their original glory, in extra-large format. The library offers collectors a once-in-a-lifetime opportunity to lay their hands on the world’s most desirable comics. Each volume includes an essay by a comic book historian along with hundreds of photos and artifacts, including rare original comic book artwork. 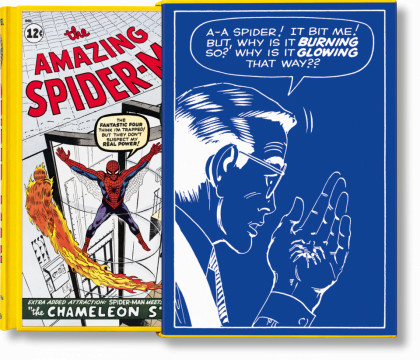 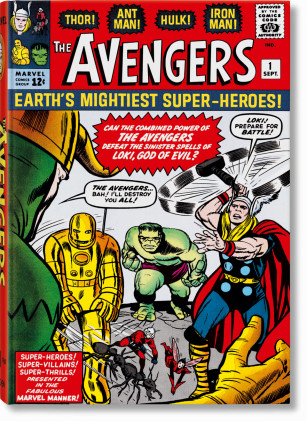 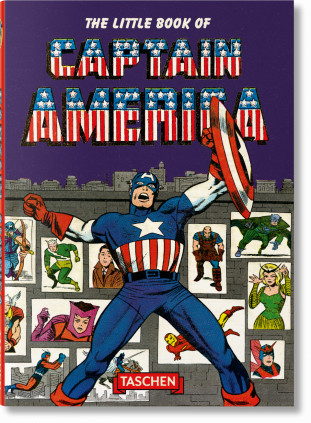 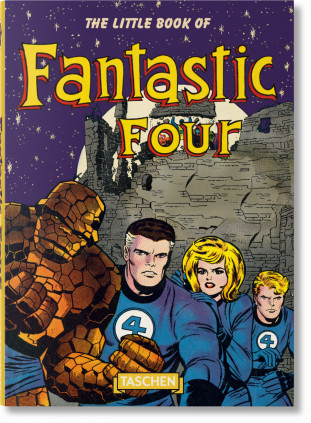 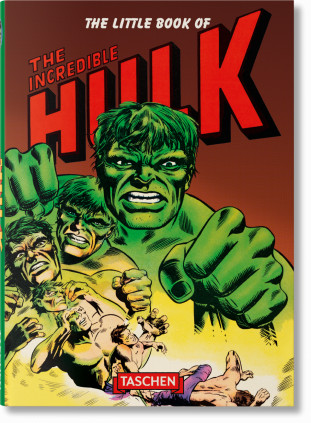