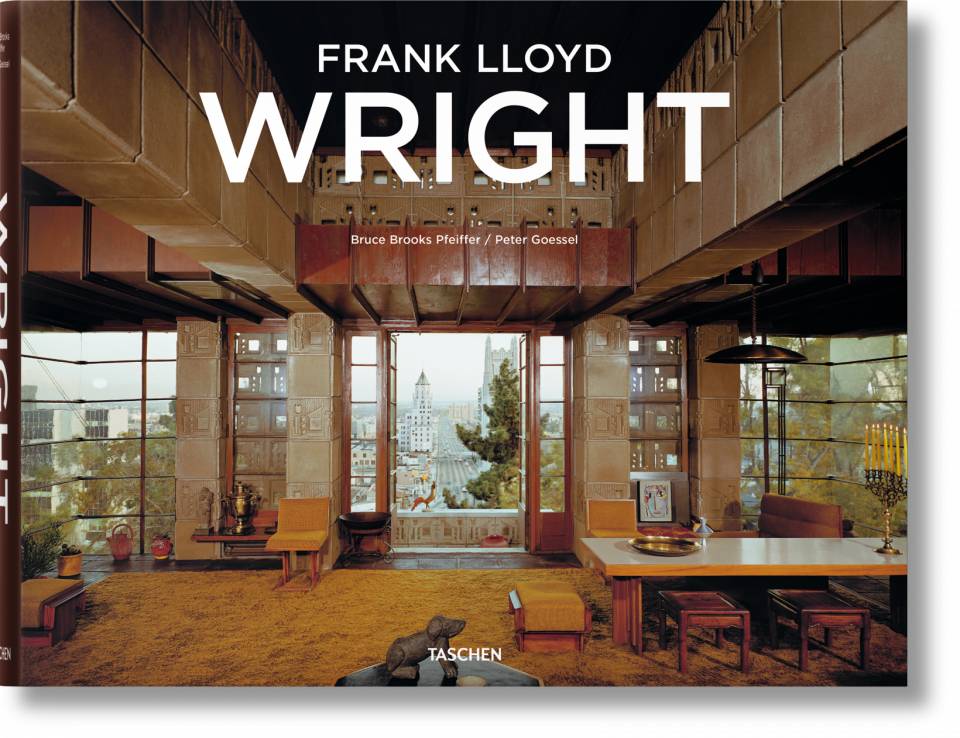 Hardcover, 13.1 x 10.1 in., 8.12 lb, 504 pages
US$ 80
Frank Lloyd Wright’s paradigm-shifting projects. This authoritative overview, based on TASCHEN’s previous three-volume monograph and unlimited access to the Frank Lloyd Wright archives, scours the length and breadth of Wright's career to bring you all the gems of his genius at a new, bargain price.

A building by Frank Lloyd Wright (1867-1959) is at once unmistakably individual, and evocative of an entire era. Notable for their exceptional understanding of an organic environment, as well as for their use of steel and glass to revolutionize the interface of indoor and outdoor, Wright’s designs helped announce the age of modernity, as much as they secured his own name in the annals of architectural genius.

This meticulous compilation from TASCHEN’s previous three-volume monograph assembles the most important works from Wright’s extensive, paradigm-shifting oeuvre into one authoritative and accessibly priced overview of America's most famous architect. Based on unlimited access to the Frank Lloyd Wright Archives in Taliesin, Arizona, the collection spans the length and breadth of Wright’s projects, both realized and unrealized, from his early Prairie Houses, through the Usonian concept home, epitomized by Fallingwater, the Tokyo years, his progressive “living architecture” buildings, right through to later schemes like the Guggenheim Museum, New York, and fantastic visions for a better tomorrow in the “living city.”

Author Bruce Brooks Pfeiffer, who served as Wright’s apprentice during the 1950s, discusses recent research on Wright and gives his own insights on these game-changing buildings.

There are plenty of books about Wright, and this one is really good.

Beautiful size, pictures and explanation
A must have

What a treasure of buildings! This is a book in tribute to Lloyd Wright and is of high quality for a great price.

This huge book is amazing ! I've always wanted it, it's the retrospective of the great architect Wright, and the pictures are fantastic !