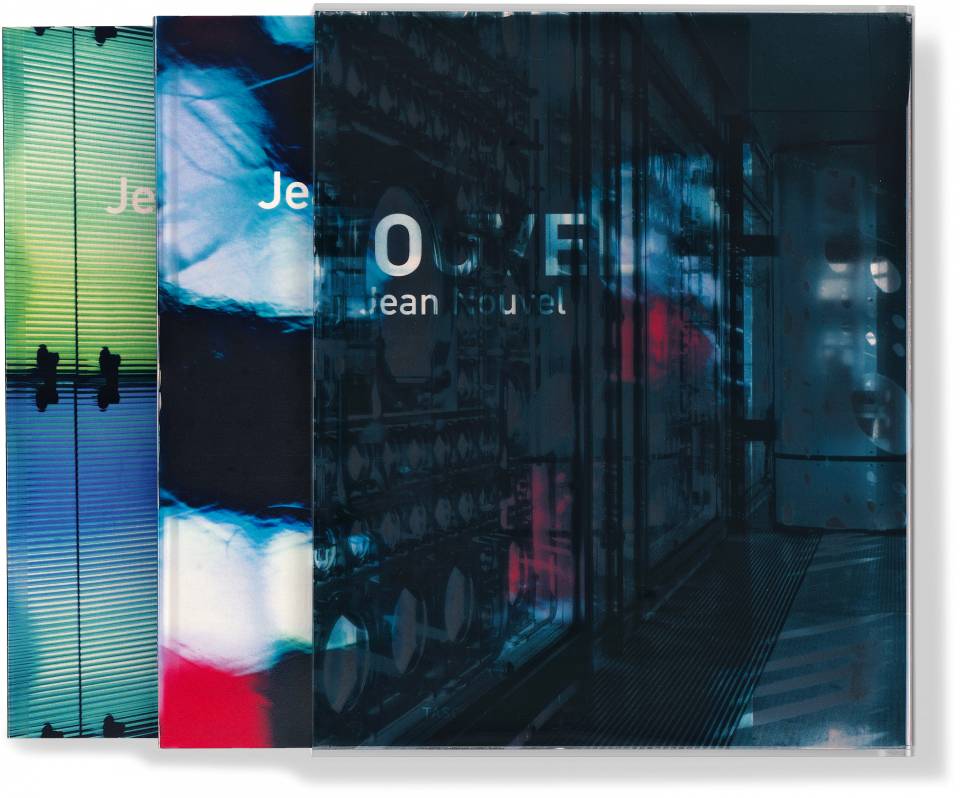 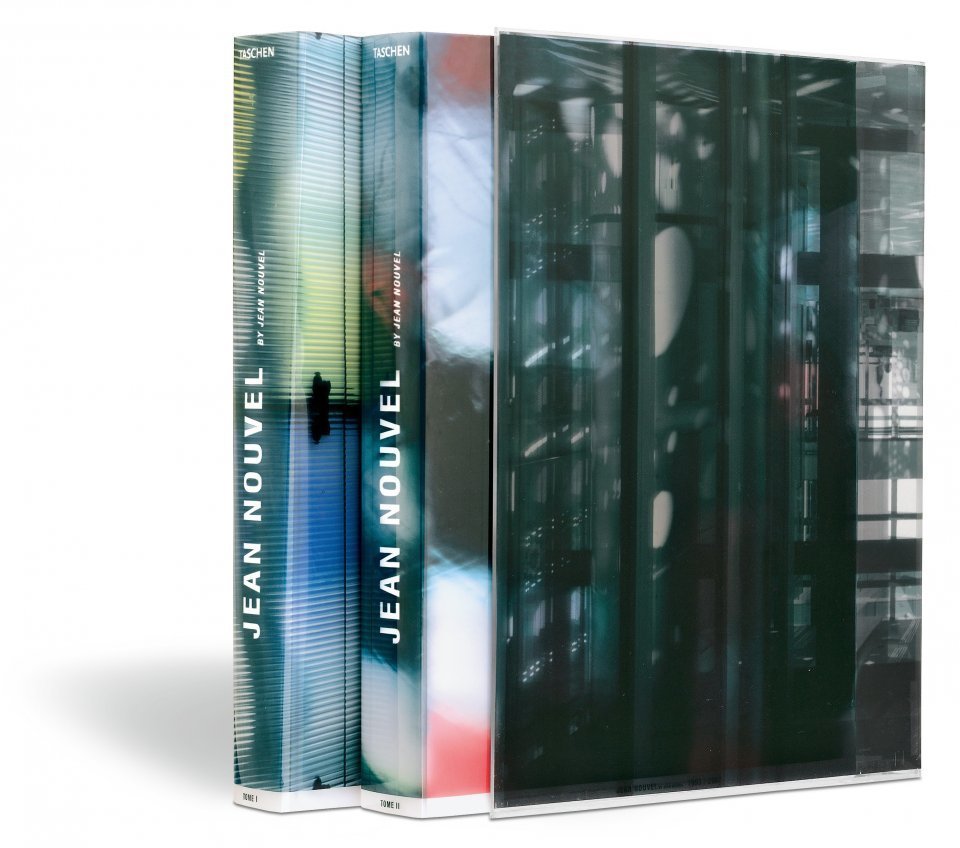 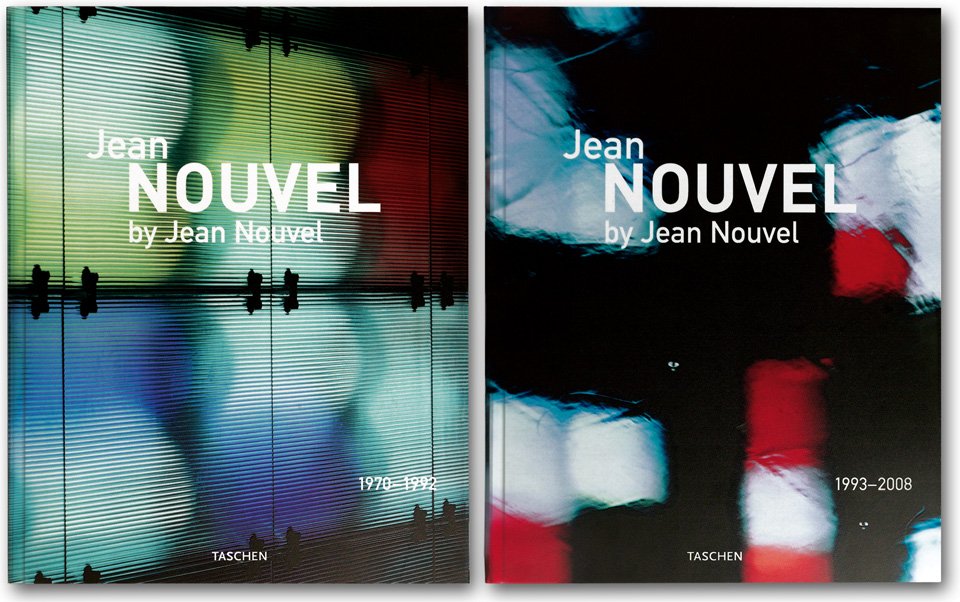 “TASCHEN has released the most complete overview to date of Jean Nouvel’s career, including works in progress, in two 400-page books, limited to 1,000 copies and packaged in a translucent Plexiglas slipcase, all designed by the master himself.”

Edition of 1,000
Hardcover, two vols. in acrylic slipcase, 11.4 x 14.5 in., 21.56 lb, 898 pages
US$ 1,500
This edition is sold out. However, occasionally, copies do become available again. Please register on our waiting list so we can inform you if this edition, or anything similar comes up.
A Collector’s Edition monograph which finally gives measure to the extraordinary talents of Jean Nouvel. Two volumes of 400 pages cover his most important buildings so far, as well as projects in progress, including the MoMA extension and prestigious Abu Dhabi Louvre. The book’s graphic design, images, and plexiglass slipcase were conceived, curated, and designed by the architect himself.

Limited Collector’s Edition of 1,000 copies, signed by Jean Nouvel, and packaged in a translucent plexiglass slipcase especially designed by Nouvel for this edition

The 2008 Pritzker Prize winner explores his career to date

Jean Nouvel is without doubt France’s most original and important contemporary architect. From 1967 to 1970, he was an assistant of the influential architects Claude Parent and Paul Virilio, later creating his own office in Paris. His first widely acclaimed project was the Institut du Monde Arabe in Paris (1981–87, with Architecture Studio). Since then, highlights of his illustrious career include the Lyon Opera House (1986–93), the Fondation Cartier, Paris (1991–94), the spectacular Agbar Tower on Barcelona’s Diagonal Avenue (2001–03), the extension of the Reina Sofía Museum in Madrid (1999–2005), the Quai Branly Museum on the Seine in Paris (2001–06), and the Guthrie Theater in Minneapolis, Minnesota.

Nouvel was honored with the 2008 Pritzker Prize as well as the RIBA (Royal Institute of British Architects) Gold Medal in 2001. This Collector’s Edition monograph finally gives measure to the architect’s expansive portfolio and his talents. Five years in the making, the two 400-page hardcover volumes give the most complete overview to date of Nouvel’s career and includes works in progress, such as the new Louvre in Abu Dhabi, the Philharmonie de Paris, and the extension of the MoMA in New York.

The volume is truly Nouvel by Nouvel. Its graphic design and images were conceived and curated by the architect while its translucent plexiglass slipcase was designed specially for the publication by Nouvel himself, drawing on his tendency to play with contrasts and overlaid patterns.

Limited Collector’s Edition of 1,000 copies, signed by Jean Nouvel, and packaged in a translucent plexiglass slipcase specially designed by Nouvel for this edition 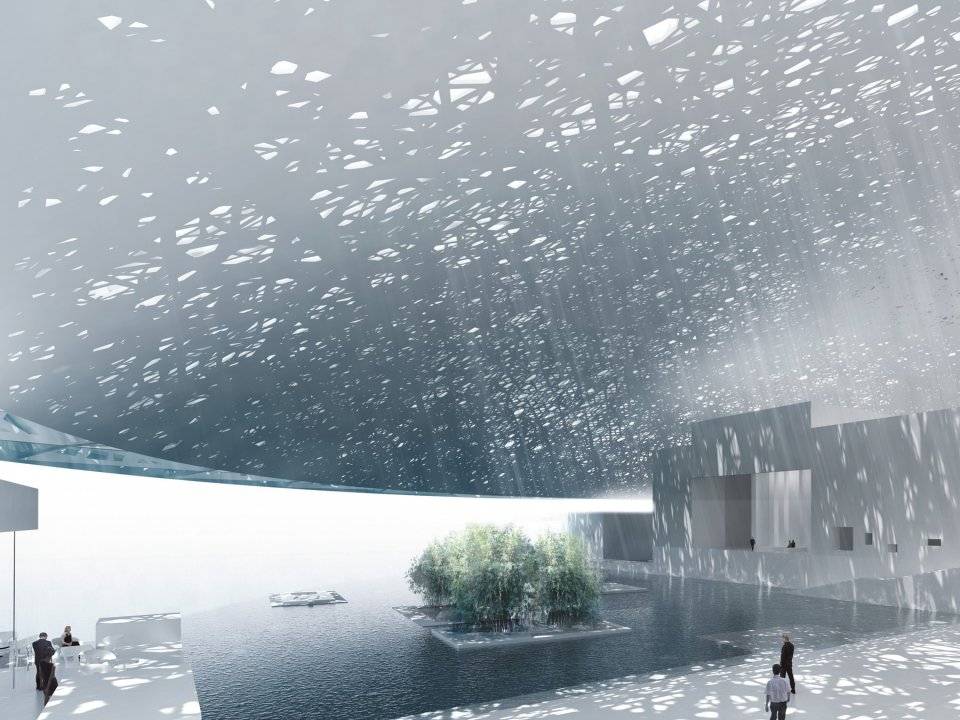