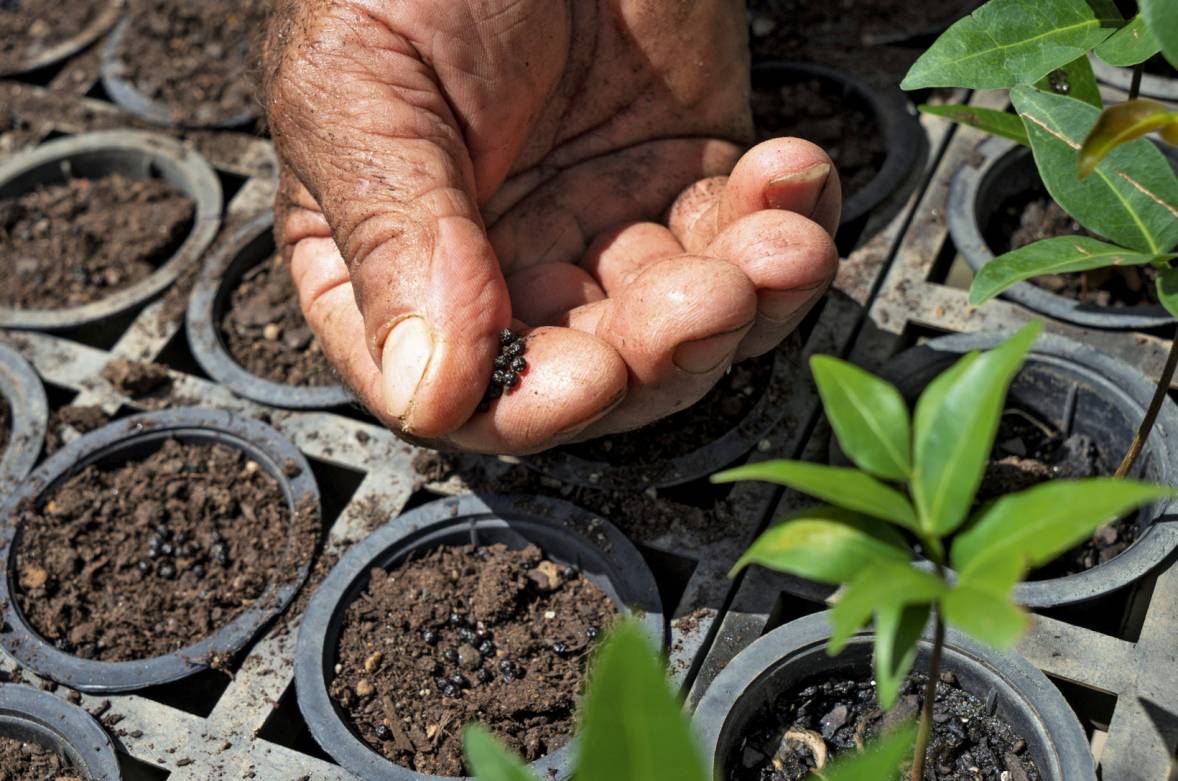 The Instituto Terra was founded in 1998 on land belonging to the Salgado family. Through a scientifically planned program of raising and planting saplings, the slopes and lowland of the Instituto Terra are now covered with two million new trees of more than 300 different species.

“It is possible to turn back the clock and recover what seemed lost forever.”
—Lélia Wanick Salgado

Through its ecological partnership with Lélia Wanick Salgado, Sebastião Salgado and Instituto Terra, TASCHEN is reaching carbon neutral status. Reflecting a lifelong devotion to the earth and its people, Instituto Terra is the culmination of an activism that pervades the Salgados’ work. TASCHEN is honored to have been a part of the organization’s efforts for many years, and to have published crucial photographic collections with the Salgados’ including Exodus, Genesis, and Amazônia, an urgent celebration of the rainforest’s indigenous cultures as well as its endangered beauty.

The Instituto Terra organization was founded in 1998 at Aimorés in the state of Minas Gerais, Brazil, on land belonging to the Salgado family. Once a cattle ranch carved out of the Atlantic Forest, the property had become arid and infertile, with dried-up rivers and little more than shrubbery for vegetation. For over 20 years, Lélia and Sebastião Salgado have reforested the valley with the species that once flourished there. Since then, a miraculous transformation has taken place.

Through a scientific program of planting and raising saplings, the slopes and lowland of the area are now covered with two million new trees of more than 300 different species, among them the Pau-Brasil tree (which gave Brazil its name), the Jacarandá Caviuna, and the Jatobá. This reforestation has resulted in the rebirth of a tropical microclimate, bringing increased rainfall and replenishing parched streams and creeks with water. Over 170 species of birds and scores of animals – some endangered and many not seen in decades – have moved back to the region.

Trees play a crucial role in balancing global levels of carbon dioxide and oxygen. While humans breathe in oxygen and expel carbon dioxide, trees work to do the opposite: they release life-giving oxygen into the environment and help absorb the excess carbon dioxide we produce. Because they do this mostly while they are growing, the impact of the new forest at Aimorés is even more significant.

“What we are doing is creating a factory of carbon sequestration.”
—Sebastião Salgado

TASCHEN’s partnership with Instituto Terra is the foundation of its carbon offset scheme. Based on the principle that our climate is affected by worldwide net greenhouse-gas emissions as well as global activities that counteract these emissions, a company can become carbon neutral through its own voluntary efforts. According to the Greenhouse Gas Protocol, TASCHEN produces 13,000 metric tons of carbon dioxide per year. Meanwhile, experts have estimated that trees planted by Instituto Terra have so far absorbed some 108,000 metric tons of the gas. TASCHEN’s investment in the organization allows the publishing house to neutralize its own carbon footprint by buying ‘carbon credits’ in the form of new Instituto Terra saplings and supporting reforestation efforts. Every TASCHEN book plants a seed.

TASCHEN celebrates its involvement in Instituto Terra’s important work, and is proud to join a small number of global companies taking voluntary action to achieve a zero carbon footprint. 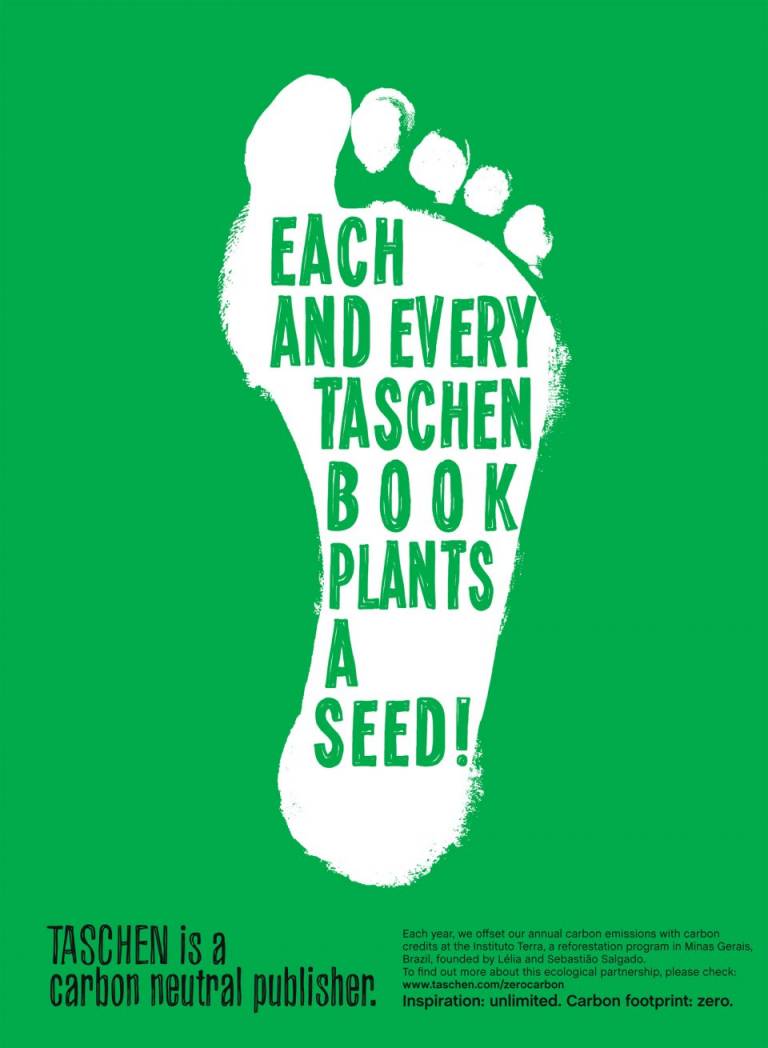 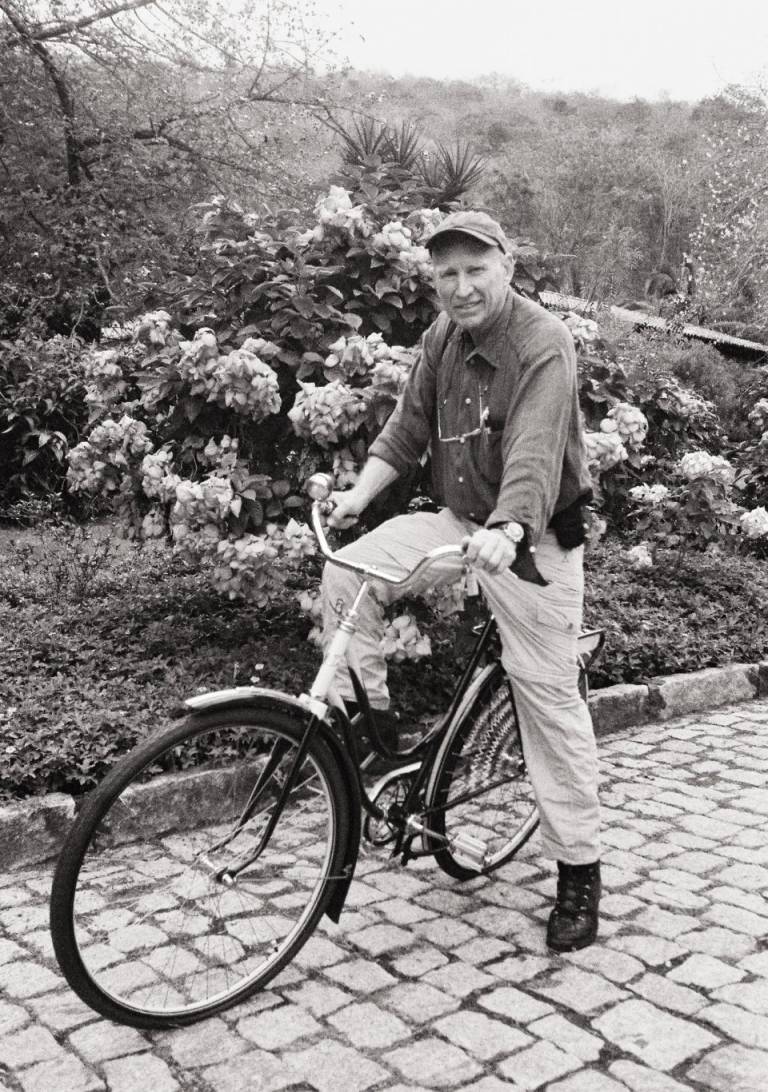