An introduction by Steve Schapiro 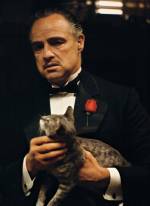 During makeup sessions, Francis Ford Coppola (right) takes the opportunity to talk with his actors and revise the script. 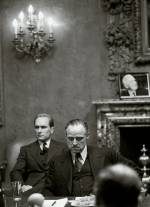 "As a photographer, sometimes you just need to be a fly on the wall."
- Steve Schapiro

When I first arrived on the set of The Godfather for a scene in New York’s Lower East Side, I had already heard the rumors that Marlon Brando was in bad health. The streets and surrounding tenements were teeming with onlookers; even the fire escapes were crammed with children and their grandmothers. Everyone, it seemed, wanted to catch a glimpse of the man who had been chosen to play Don Vito Corleone.

I had convinced Life magazine to do a “guaranteed” cover story on the Godfather film—something they did not ordinarily do—provided Paramount would grant Life the exclusive right to print the photographs before any other publication. Curiosity as to what Brando would look like in the film had already captured the public’s imagination, and Paramount’s plan was to keep everything as secretive as possible and to hold back on revealing Brando’s look until the film actually came out. As I approached the set, the crew was setting up for the attempted assassination of the don. Coming closer I noticed a sallow-faced elderly man, wearing a worn coat and hat and talking in a low, frail voice to an assistant director. I suddenly realized that I was looking at Marlon Brando. My heart sank, and at that moment I thought all the bad-health rumors were true.

Then Brando suddenly turned away, facing the many spectators, and the electricity of a young man’s eyes shot out into the crowd. Brando turned back to the AD, and warned in his familiar dynamic voice,“Someone’s out there with a camera.” It was not until the farewell party, after production was finished, that I saw the real Marlon Brando—a smiling, handsome man in his 40s who had just accomplished one of the greatest tours de force in the world of acting.

It is common knowledge that, at the time, no one thought this film would be an important film—or even a good one. It was rumored that Paramount executives were sending out their secretaries during lunchtime to buy copies of Mario Puzo’s novel, hoping the increased sales might influence the New York Times best-seller list and heighten public interest.

It is common knowledge that, at the time, no one thought this film would be an important film—or even a good one

It was uncertain whether there would be enough funding available to finish shooting, and days were removed from the shooting schedule because of the tight budget. The controversy had begun with casting and continued through every turn of the wheel. During the filming itself, there were days when I saw director Francis Ford Coppola unable to capture the respect—or even, it seemed, the attention—of some of his own assistant directors.

What emerged was not the two-dimensional New York gangster picture it might have been. Francis carefully chose the actors for their inner qualities and depth, and then allowed them to cultivate these emotions. As a result, deeper dimensions grew and came to life. The set was filled with humor, from practical jokes to the famous mooning episodes. The Coppola family worked like the Corleone family, and everyone melded together. Coppola also believed in the importance of props as a means toward authenticity. He knew that if he provided one of his actors with a prop as stimulus, the actor would make something out of it. With that in mind, Francis found a stray cat that had been running around the Filmways Studio and pushed it onto Brando’s lap, without comment, and let Brando develop it into what would become an epiphany for Don Corleone’s character— and, eventually, the logo for the film.

As a photographer, sometimes you just need to be a fly on the wall. Shooting the movie’s opening sequence in Don Corleone’s office meant working with a blimp (a metal box, sponge-foamed inside to muffle the still camera’s clicks), or waiting until the scene was finished so that it could be replayed for the still camera.My two most memorable images came from within those doors: Brando holding the cat, and Salvatore Corsitto, as Bonasera, whispering into the don’s ear. Both photographs have been used over and over again to iconize the movie, and are now familiar images throughout the world.

But there are also times when a photographer has license to shoot at will, looking for the candid moments. The organized chaos of the wedding-party scene offered a wonderful opportunity to capture the actors at work, and at play.

The set was filled with humor, from practical jokes to the famous mooning episodes

Behind the scenes, all the tricks of the trade are revealed, like the wiring-up of James Caan with gunpowder-filled brass casings and sacs of fake blood—all to be set off by remote control to create the illusion that the bullets are hitting him from a distance, riddling his body with bullet holes and blood.

During the filming of The Godfather: Part II, Gordon Willis, the cinematographer, seemed to be going for an Oscar. Usually it was almost noon before he would feel his lighting was ready for the first shot of the day. For a scene on a hotel balcony in the Dominican Republic, where Lee Strasberg sits with Al Pacino to cut the cake that symbolizes Cuba, the light continued to be just not quite right for four days.We remained there, doing the same scene over and over. One morning, I took Al Pacino around the corner of the balcony to do a portrait against a glass window.With some actors, I’ve had to jump up and down or even make bird sounds to get the appropriate look. Al, within half a roll, had given me anything I could ever ask for, and we were done.

In Sicily, it was like a merger of families—everyone had family there.My fondest memory is of Coppola’s mother coming out one morning dressed exactly like Francis— with a false beard, glasses, and the same brown corduroy jacket he always wore. They looked almost identical, together beneath the Corleone town sign.

During a film production, the still and “special” photographers are low men on the totem pole. They are thought to take time and energy away from the production, and their work is considered unessential to the finished film itself. Yet for The Great Gatsby, Paramount credited me with making $ 7 million for the company through my soft, romantic images, which appeared on many magazine covers and throughout the entire advertising campaign. (The film, though incredibly beautiful, was slow-moving and didn’t inspire the necessary word of mouth to become a blockbuster.)

For The Godfather: Part III, besides shooting during scenes,my primary assignment was to create a poster to advertise the movie. It was decided while we were in Palermo, Italy, that I would photograph Al Pacino sitting in a hallway, with light streaming through the windows behind him, reflecting onto the floor. Dutifully, we set up for this shot at 9:00 A.M., with that wonderful light just the way I wanted it. And then we waited. And waited. And then we waited some more. The scene being filmed in the study was long, and Al was simply never available. Time continued to pass, and it was five o’clock that afternoon before Al was finally available for the photograph.

By that time, those special rays of light had passed us by. I had a strobe lamp coming from the side to illuminate Al himself, but the only way to light the window and the floor the way we had planned was to make a foursecond timed exposure with the camera. Al Pacino is not exactly the sort of person who likes to sit still in a chair for very long. I would click open the camera shutter, the strobe light would go off—and so would Al. Before we could say anything, he was standing up, in a completely different position. He was double-exposed on the entire first roll of film I took.

With some actors, I’ve had to jump up and down or even make bird sounds to get the appropriate look

Finally, I explained in greater detail what we were up against.We cut back to a three-second exposure, Al sat still, and the photo came out as the poster image we had dreamed of, with hardly any retouching at all. The Godfather trilogy is a story about love, honor, revenge, violence, family, and the handing down from one generation to the next. It strikes chords in all of us. It was a coming together of script, direction, actors, lighting, costume, and scenic design. I was very fortunate to see all this happen firsthand, along with the behindthe- scenes moments that made it an even more poignant event. I hope this book conveys at least a little bit of what I saw of The Godfather.

Schapiro and Boyd in New York

On the set of Taxi Driver

The Making of The Godfather

An essay by Mario Puzo