The spirit of Berlin

Portrait of a city from 1860 to the present day

Alois Bankhardt. Children playing at the air-lift, 1948. The semi-circle of bricks recognisably represents the airport building at Tempelhof. The toy planes, though, may have been provided by the photographer. 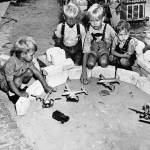 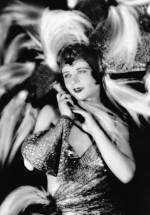 Anonymous. A summer’s day on a grasstopped flat roof in Berlin, 1926. Entertainment comes from the valve radio, a novelty then.

Josef Heinrich Darchinger. The ruins of the Reichstag after the beginning of the renovation work in the summer of 1958. The Reichstag building was badly damaged by fire in 1933 and in the Second World War. The striking dome was blown up in 1954 because of so-called unsafe structural engineering, in order to relieve the rest of the building. Between 1958 and 1971, the building was rebuilt according to plans drawn up by Paul Baumgarten.

Anonymous. Still from Guy Hamilton’s spy film “Funeral in Berlin”, 1966. During the Cold War, Berlin was the playground of secret agents; but the game was in earnest. Agents exposed by the other side were occasionally exchanged on Glienicker Bridge, the city border between Berlin and
Potsdam—at times even in coffins. The movie scene was filmed on the Bridge of the Millions in Wedding, however.

Erich Lessing. May Day demonstration outside the Reichstag, 1959. The war of the ideologies did not mince words: the words read, “Berlin stays free.” A rally was being held at the same time in the eastern part of the city. 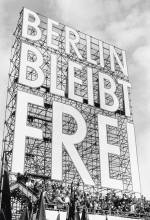 Berlin has survived two world wars, was divided by a wall during the Cold War, and after the fall of the Wall was reunited. The city emerged as a center of European power and culture. From 1860 to the present day, this book presents the story of Berlin in photographs, portraits, maps, and aerial views. With nearly 700 pages of emotional, atmospheric images, from giddy pictures of the Roaring Twenties to devastating images of war to heartwarming postwar photos of a city picking up the pieces—the Reichstag in ruins and later wrapped by Christo and Jeanne-Claude—this is the most comprehensive photographic study on Berlin ever made. More than a tribute to the city and its civic, social, and photographic history, this book especially pays homage to Berlin’s inhabitants: full of hope and strength, in their faces is reflected Berlin’s undying soul.

The author: Hans Christian Adam studied psychology, art history and communication studies in Göttingen and Vienna. As a specialist in historical pictorial material, he has published numerous articles and books, including titles on travel and war photography. For this book he has researched in public and private collections, viewed tens of thousands of images and also profited from the rich collection of written material in the Berlin State Library. He is also the author of TASCHEN’s Edward Sheriff Curtis: The North American Indian, Karl Blossfeldt, and Eugène Atget: Paris.
Partager
share twitter
Lanting on life
Julius Shulman. Modernism Rediscovered