Is that a banana in your pocket?

John Holmes, from a private collection 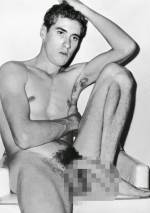 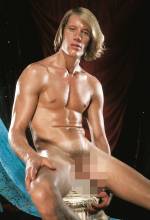 No racial or ethnic group is uniformly large and no group is uniformly small.Women, we are constantly assured, care nothing about penis size. Men may be more candid, but there are also male fans of the small penis, either as a symbol of youth or for its amazing ability to make one’s own penis look larger.

Everyone takes the big penis personally, as an object of fear, arousal, and endless fascination

All that out of the way, who can deny the allure of a big dick? Flaccid or erect, it is aesthetically stunning—commanding every onlooker to consider capacity and consequence. Many viewing the photos for this book blurted out, “I wouldn’t let that near me!” As if anyone were offering. Everyone takes the big penis personally, as an object of fear, arousal, and endless fascination, that last derived from the Latin fascinum, meaning both phallus and magical spirit. Big shoulders, big lapels, and big hair may come and go, but the big penis never goes out of fashion. And because humans walk upright, their penises are a more obvious accessory than those of most animals, a quirk that has hardly escaped man himself.

The medieval codpiece began as a practical addition to European menswear in about 1420. Men wore just tunics and stockings at the time, as underwear didn’t exist, and when tunics got shorter a simple triangle of cloth was designed to hide the genitals. Over the next hundred years this flap of cloth was refashioned—first to lift and project, then padded, then padded a great deal more, then molded into an elongated oval that projected up and out from the groin, giving the appearance of a monstrous permanent erection. By 1,500 codpieces were worn from England to Italy, with every country vying to outdo the others in size and originality of adornment.

The evolutionary path of the codpiece illustrates the intense competition engendered by penile display, a competition older than man himself. Many species of monkey establish group hierarchy and mating rights by displaying an erect penis.When confronted with a superior erection, a male of lower status responds by cowering or presenting his buttocks to be mounted. An interesting evolutionary result is that primates who engage in penile display are better endowed.

The gorilla, for example, has the smallest penis of the great apes, measuring a humble 3 cm when erect. Gorillas also operate under the one-male mating system, wherein the dominant male has the right to impregnate all the females, making penile competition unnecessary. Chimpanzees, on the other hand, must compete with other males to win favor with females, who are free to choose their own mates. Chimps are fervent displayers with penises nearly three times the size of the gorilla’s. Since humans have the largest penises by far among the primates, we may speculate that man was showing off long before the codpiece came along.

Professor Alfred Kinsey was probably the most prolific penis measurer in history, collecting statistics from 3,500 men for his 1948 book Sexual Behavior in the Human Male. Kinsey’s technique, much disputed, was to provide his subjects with a blank card that they were to place along the topside of their erection, mark, and return to him for measurement. From these 3,500 cards Kinsey concluded that 65.7% of all erect penises are between 5.5 and 6.5 inches, with a mean length of slightly over 6 inches. Just over 15% measure between 6.75 and 7 inches, while about 8.6% are between 5 and 5.25. The remaining 10.5% spread out to each side, with about twice as many men above 7 inches as below 5. Penises measuring 8 or more inches account for only 1.8% of Kinsey’s subjects, and he found none measuring more than 9 inches. Kinsey did not compare figures between racial or ethnic groups, but he did take an interest in the relative size of sex offenders’ penises, finding that the cocks of exhibitionists, contrary to what one might imagine, are generally of average length, and that only sexual aggressors against minors have unusually large penises, averaging 6.5 inches erect.

Penises measuring 8 or more inches account for only 1.8% of Kinsey’s subjects

The Kinsey Institute recently updated this study with 300 volunteers who were personally measured by researchers, who found the average erect penis had shrunk to just 5.5 inches in length. Perhaps this was always a more accurate measurement, as any man holding a card to his penis in private would be tempted to stretch the truth. This discrepancy between professional- and self-measuring is corroborated by two other recent studies, one published in the September 1996 Journal of Urology, which found the average erect penis to be only 5.08 inches long when measured by researchers, compared to a far more generous average of 6.1 inches claimed by men measuring themselves for the JackinWorld.com website.

Dr. Kevan Wylie from the Royal Hallamshire Hospital of Sheffield, England, and Ian Eardly from St. James Hospital in Leeds have compiled the most comprehensive overview of penis size. Their report, published in the June 2007 issue of the British Journal of Urology International, combines the findings of 12 studies conducted since 1942 involving 11,531 men. It concludes that the average penis is between 14 and 16 cm (5.5 to 6.2 inches) in length and 12 to 13 cm (4.7 to 5.1 inches) in circumference. This would seemingly end the debate, except that nearly all penis size studies, including Kinsey’s, Masters and Johnson’s, and possibly JackinWorld’s, have concentrated on the western Caucasian penis. Until someone undertakes a global study, measuring men on all continents in their precise proportion to world population, the length of the average erect penis, and thus the starting point for the large penis, will continue to elude us. Curiously, the only study to come close to this global ideal was conducted over 100 years ago, under somewhat less than scholarly conditions.

Priapus was the John Holmes of ancient deities, always pictured with his enormous erection proudly on display

Dr.“Jacobus X” (Jacobus Sutor), a 19th century French military surgeon, served 28 years on posts in Asia, Africa, South America, and the Pacific islands. Like many in the days of white imperial rule, Sutor felt free to experiment upon “native” peoples in ways unimaginable today, by which I mean he was a tireless penis measurer. In his book Untrodden Fields of Anthropology, published in 1898, Jacobus reported on the sexual characteristics of both men and women, but showed a clear preference for his male subjects, whom he measured at every opportunity, both flaccid and erect, including many back home in France. Arabs showed the largest average size, measuring 7.2 to 7.6 inches in erection—big enough, according to Sutor, to “produce serious mischief in the rectum of any poor wretch who consented to suffer its terrible attacks.”He was most taken with the African penis, which he described as feeling in erection like “an India rubber tube filled with liquid,” and it was among the Malinkes tribe in Senegal where he found his individual prize-winner: “a terrific machine” nearly 12 inches in length, with a diameter exceeding 2.3 inches,“more like the yard of a donkey than that of a man.” Sutor’s theory was that circumcision, practiced by Arabs and many African tribes, was responsible for their larger penises, writing: “It is certain that the removal of that portion of the skin, and the mucus surface of the foreskin, which compresses and caps the gland, and often prevents it coming out even when in erection, interferes with the development of the young boy’s organ.” A clever theory not borne out by Kinsey’s measurements of circumcised Americans.

The phallus, or representation of the penis, has been worshipped as a holy icon in Egypt, India, Syria, Babylon, Persia, Greece, Italy, Spain, Germany, Scandinavia, and ancient Galacia. Hernán Cortés reported finding phallic idols in the temples of Mexico. Stone phalli, many of enormous size, can be found on some Pacific islands. In the Bible, Ezekiel 16:17 accuses the Jewish women of making gold and silver phalli and committing “fornication” with them as a primitive act of worship, proving that men are not entirely alone in phallic appreciation. The Greeks and Romans had a purely phallic god in Priapus. The god was charged with protecting livestock, assuring abundant crops, and making sure human penises stayed as hard as their own.

Priapus was the John Holmes of ancient deities, always pictured with his enormous erection proudly on display. Images of the god were mounted over Roman doorways to frighten off thieves, who were to believe they’d be buggered by an equally large penis if they entered the house. I was initially suspicious of the claim that anal rape was a common punishment for burglary in ancient Rome, but in verse 35 of the Priapeia, a series of 86 Latin poems written in the voice of Priapus, the god boasts, “I’ll bugger you, thief, for the first offense. The second time, into the mouth it goes. But if you commit a third theft, your ass will taste my vengeance—and then your mouth again.” Promises, promises, some might say.

The Priapeia make it clear that a huge penis is as much a symbol of male dominance as of sex, an idea that predates ancient Rome. The phallus first acquired its power when early humans made the connection between sexual intercourse and childbirth, some time between 10,000 and 5,000 B. C. Before that, goddess worship predominated, but when men realized they were the key to procreation all the nurturing goddesses were replaced with swaggering male gods. The phallus was the patriarch’s sword and scepter, a symbol of his natural dominance but also of the father’s role as protector.When Abraham commands his servant to lay his hand “under my thigh” while swearing a solemn oath in the Book of Genesis, it is actually his penis the man must touch to show his fealty. Phalli nailed to the gates of Pompeii averted the evil eye, as they did in Welsh homes, Indian temples, and African villages. Phallic worship had the allure of a living embodiment, a physical counterpart to the mystical that every man and woman could appreciate. Perhaps that’s why, as gods have come and gone, phallus worship has continued to the modern day. In Bhutan a thoughtful host will dip a wooden phallus in the cups before offering drinks to visitors; in the Sunda Islands of the Malay Archipelago life-size male figures with erect penises painted a gaudy red surround and protect the villages; in Bangkok a shrine featuring hundreds of phalli decorates the grounds of the five-star Swissotel; and in India, Shiva, the oldest continuously worshipped god—going on 5,000 years—is still represented by a phallus.
Partager
Ed Fox
America Swings

The Little Book of Big Penis