The lost continent of Tiki

A high priestess and a flaming Easter Island statue guard the portal to another world, the mother ship of Tiki Pop: the Kahiki in Columbus, Ohio. 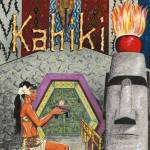 The cartoony mascot, “Mr. Bali Hai” of the San Diego restaurant called after the hit song of the same name. 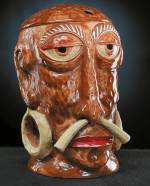 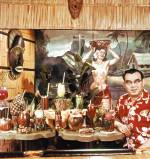 Comical character “The Goof” was the Hut’s pre-Tiki logo figure. 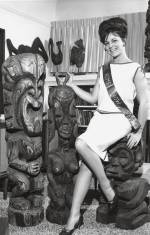 As he steers his Ford along the Los Angeles freeways, Sven Kirsten, 59, might be a John Ford character re-envisioned by the Coen brothers. One of those intrepid Americans who make their way through a dilapidated universe, carrying within them the certainties and flaws that the eternal US of A bestows on its heroic children.

Here he is considered the doyen of Tiki, the man whose self-sacrificing work as a self-made ethnologist has revived an entire chapter of US popular culture.

Kirsten parks the Ford in front of a Glendale restaurant: Damon’s. ‘Aloha, welcome to our little atoll,’ he says smilingly as he opens the door. Inside, Pacific statuettes from the Eisenhower period, a discreetly lit aquarium, dug out canoes hanging from the ceiling, and an exotic cocktail menu for Madmen-style businessmen running from the Blue Hawaiian to the Lapu Lapu. Are we in 1957? Are we about to meet Angie Dickinson or Jack Lemmon? And why this plastic Polynesia in the Los Angeles of Rihanna and Matthew McConaughey? hat’s the Tiki question, in a nutshell. ‘The Tiki style,’ explains this interpreter of inner-city lagoons, while sipping a “Mai Tai” at the bar, ‘is the lost paradise of the American Dolce Vita. As early as the 1930s, the artificial Eden of Hollywood found its mirror in Polynesian exoticism. It began with a John Ford film, Hurricane, in which Dorothy Lamour plays a femme fatale. Tiki is the first man, the Maori Adam, but also a phallic symbol and the god of artists. In 1910, Picasso owned a Tiki from the Marquesas. Hollywood made it into something else. The fashion was fuelled by the musical and film South Pacific, adapted from a bestseller by author James Michener, a veteran of the Battle of Guadalcanal, and the model for the sugar-coated films later made by Elvis in Hawaii. At the same time the entire world was glued to the epic of ‘Kon-Tiki’, a pre-Columbian-style raft that sailed from Peru to Polynesia to prove that the Pacific had been peopled by Amerindians. Hollywood appropriated the captain of the expedition, Tho r Heyerdahl, by awarding him the Oscar for the best documentary of 1951. ‘It was the dawn of the Tiki period’ says Kirsten.

The suffering of GIs coming back from the WWII hell in the Pacific was sublimated and repressed in the creation of a dream Oceania, the euphoric mask of a historical trauma. Everywhere bars with bamboo ceilings and rattan furniture rose up; there were extravagant restaurants with interior waterfalls, artificial jungles, and nude paintings of Gauguin-style idylls, a sort of National Geographic eroticism. This was the golden age of Tiki, between McCarthyism and the birth of hippy culture, let’s say the decade of 1955–65.’

The Tiki style worked its magic on the idols of the silver screen. Frank Sinatra downed Mai Tais. Marlon Brando, bewitched by local charms while filming Mutiny on the Bounty, bought a Polynesian island and married the Tahitian star of the film. The merchandising commenced: American Tiki had nothing to do with ethnological exactitude. It was more like a projection of one’s life in Technicolor. Reality is an island on which you are the hero. Epicurean restaurateurs such as Don the Beachcomber or Trader Vic soon had chains of Tiki establishments throughout the USA with pineapples, plastic flowers and gracious hostesses. They served cocktails inspired by the Jamaican Planters Punch or the Cuban daiquiri: “Vicious Virgin”, “Shark’s Tooth”, “Cobra’s Fang”, “Dr Funk” and even the “Martiki”, the Polynesian version of a Martini. In Los Angeles, the owner of the Tiki Ti said about his own seventy-two cocktails: “It’s escapism. It’s fake.”