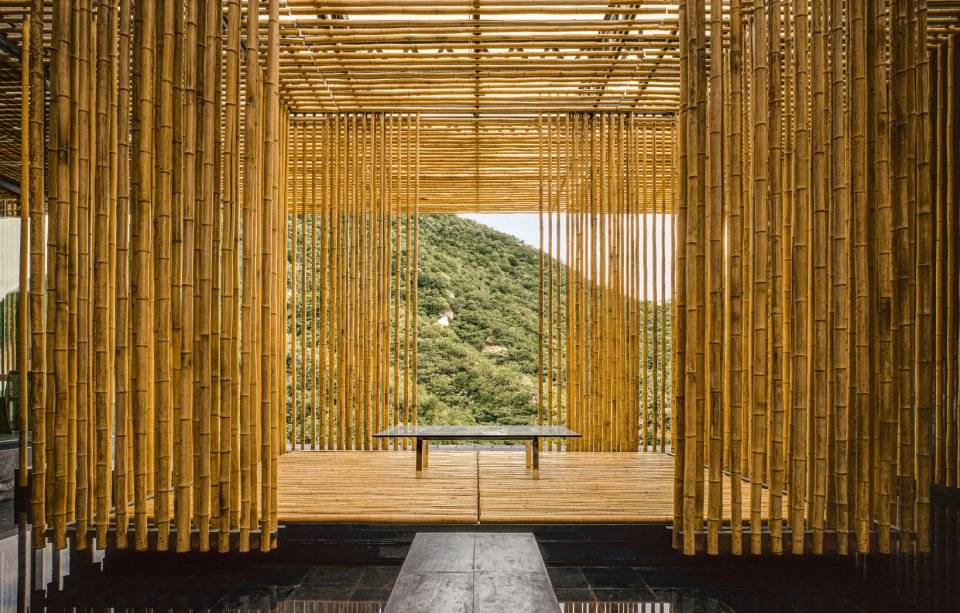 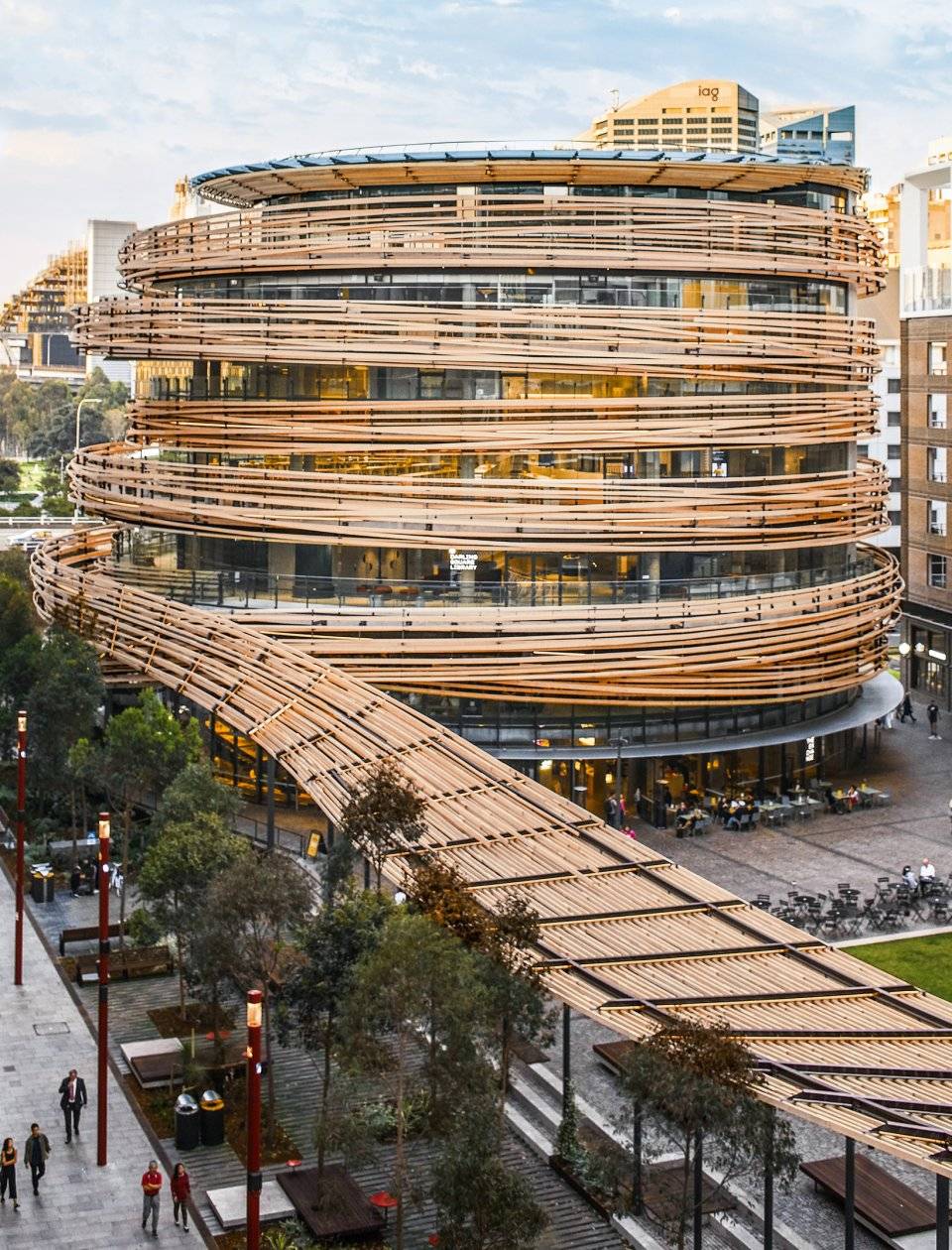 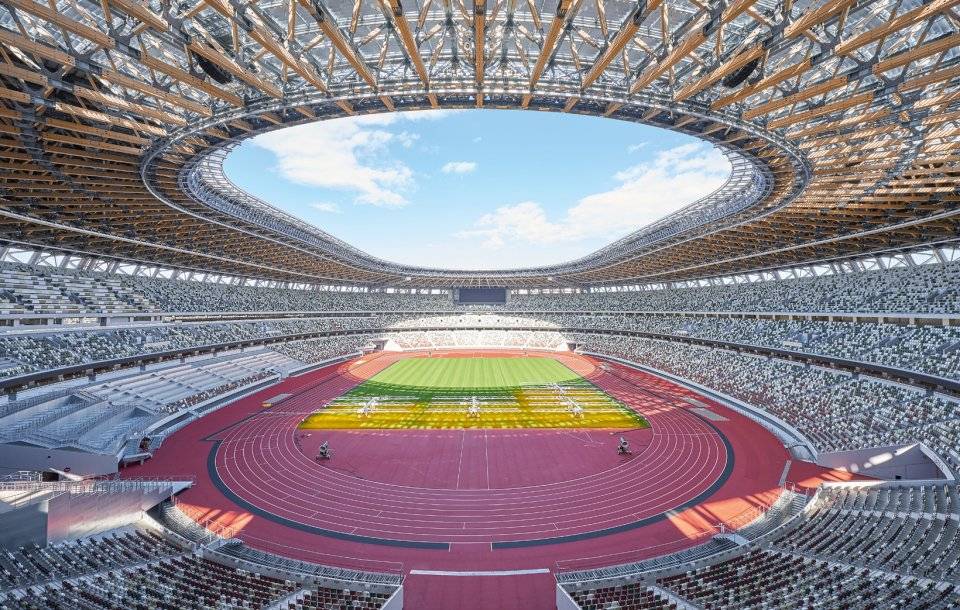 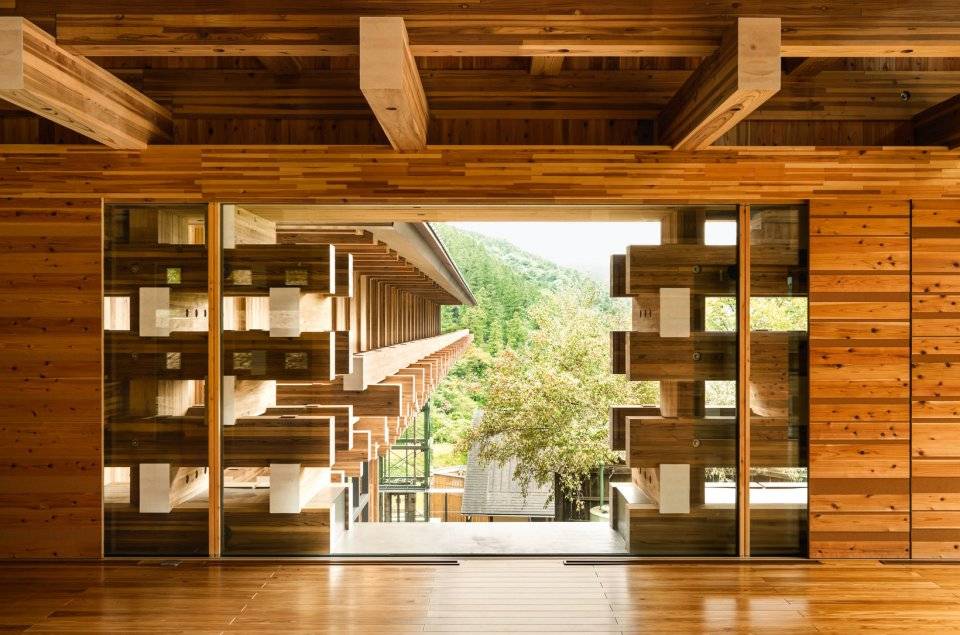 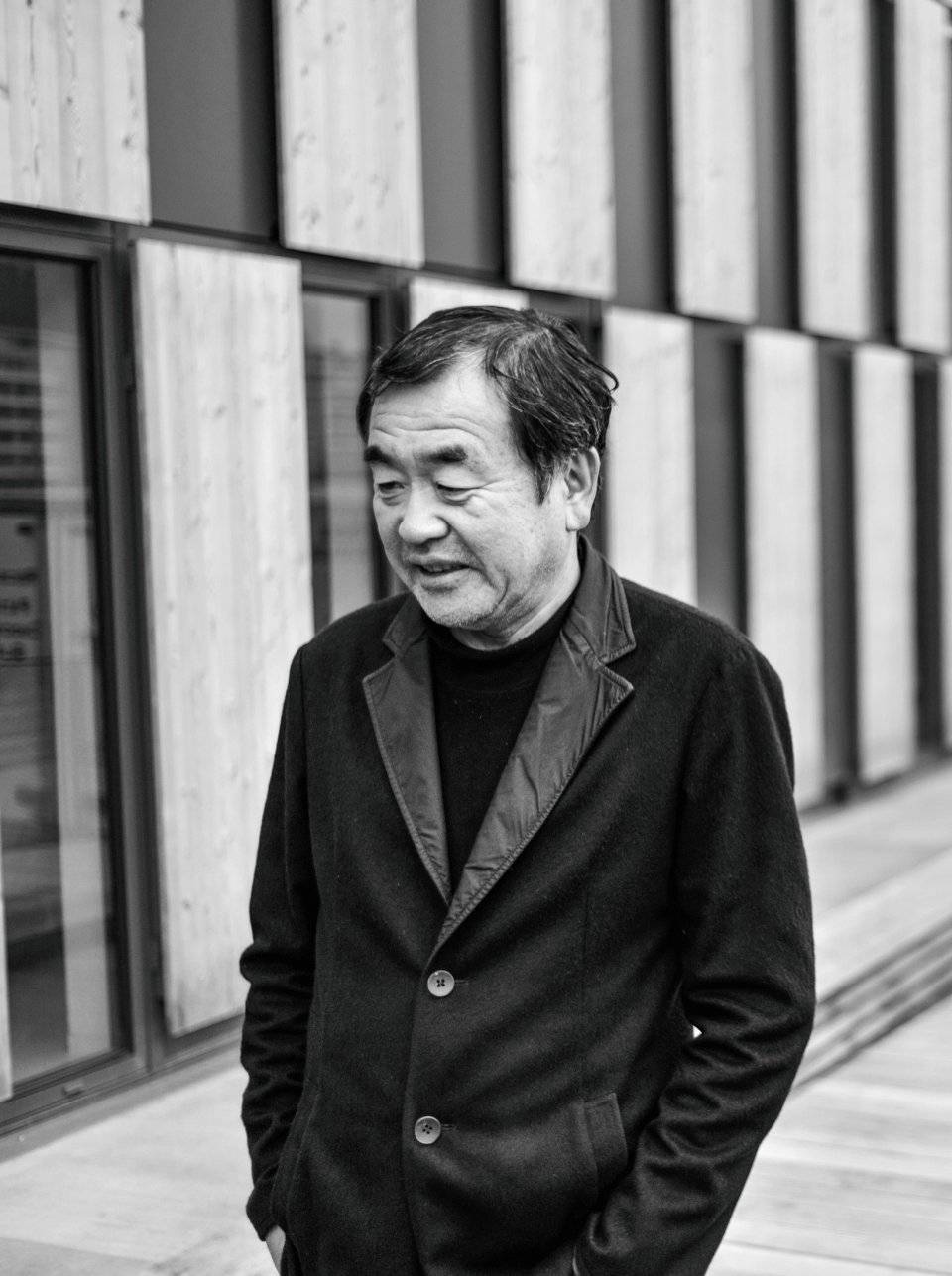 “For the past 30 years, I have been driven to create architecture by the desire to recover materials, and to reconnect people and physical things. It turned out to be the most enjoyable experience imaginable. This is because the world itself is material.” – Kengo Kuma

I have lived my life during two contrasting periods, and I have tried to create architecture with a desire to discern the essence of these times. Today’s needs are different from those of the immediate past. One of these periods is 20th-century industrialized society, while the other is 21st-century post-industrial society. America was considered the champion of industrialized society. Japan used America as a model in order to achieve rapid economic growth and the second largest GDP in the world. The 1964 Tokyo Olympics were a symbol of this rapid growth.

By the time I reached college, Japan had completely changed. The issue of pollution had emerged, and people had begun to think that large public buildings were a waste of taxes and a cause of environmental damage. Kenzō Tange was no longer a hero in my mind. He was an anachronistic old man. I traveled to the corners of the world looking for something to replace concrete and steel. I went to the Sahara and visited houses made from sun-dried bricks. I visited islands in Japan and thought about the appeal of small, wooden houses. I became confident that small, low buildings were much more appealing and that the age of large, tall buildings had come to an end. I got many hints from rural villages.

I was asked to design small buildings for towns and villages in the countryside in the 1990s, during the Japanese economic downturn. Although the buildings were small, this work was rewarding. I was able to talk and work directly with local craftsmen. For projects in Tokyo, I could only talk with the manager of the construction company. And managers were primarily interested in financial factors and the schedule of a project. They were not interested at all in the architecture itself. They were not interested in the elements that comprised buildings. To them, buildings consisted of money and time.

Since nothing would change by talking to them, I decided to travel and see various places in Japan. I found that there were quite a few craftsmen who had not given up and continued to persevere with their craft. When I created buildings together with these craftsmen, I learned from them. I acquired a wealth of knowledge about natural materials: wood, paper, and earth. This is something that they do not teach you at school. The craftsmen were an integral part of this process, and I thought alongside them as they worked.

As this process went on, the range of my travels gradually expanded. I was able to build things with local people in the countryside in Asia, as well as in Europe and America. I came to feel that a country as a unit has no meaning. What did have meaning, and was very rewarding, was making things using the materials and skills that are unique to each location. This made me think that I should focus on each locale and work closely with the people in that place, forgetting about the country in which it was located.

When I learned that the Olympics were coming to Tokyo for the second time in 2020, and that a main stadium would need to be designed, I focused my thoughts on how something different from the 1964 Tokyo Olympics could be created. That was the only thing I thought about. I thought that it was both my mission and obligation as someone who had been given the opportunity to live in these two contrasting ages.

The 1964 Olympics were represented by concrete and steel. Being tall and large was both a goal and a theme for that age. In the year 2020, we were looking in the opposite direction. In the current period, being tall and large seems embarrassing. The goal of our time is to be low and small. People have begun to feel that using industrial products, such as concrete and steel, is problematic, and that being surrounded by “weak” and soft materials like wood and paper makes people feel more at ease.

I thought that I would like to show people that it is possible to build a stadium that can accommodate 80,000 people using wood as the main material. In addition to replacing concrete and steel with wood, I wanted to create architecture that was like a cloud made up of small wood particles. Wood is subject to the limitations of nature, and there are limits to the dimensions of wood members. Natural wood is always small, gentle, and soft. Wood is humble.

I designed a stadium that can hold 80,000 people as an ambiguous structure that looks like a cloud, made by assembling small pieces of wood. Fortunately, the stadium is surrounded by one of the most beautiful parks in Tokyo, Meiji Jingu Gaien Park. A stadium with a presence that resembles a cloud blends in and becomes one with the forest.

Modern architecture negated the heavy walls of the 19th century and earlier periods and was thought to blend in with the environment as long as glass was used. But glass is a material that only ensures a line of sight. It is impossible to connect architecture and nature by only using glass. In the 20th century, priority was given to line of sight, and this concept induced a dependence on glass. Modernism depended on concrete, steel, and glass, and this resulted in a severing of the connection between people and nature, making nature something that was very far away. The stress that this attitude created tended to crush people.

Traditional architecture in Japan did not use concrete, steel, or glass. In addition, heavy materials like stone were rarely used. Traditional Japanese architecture uses soft and light materials like wood and paper to provide a gentle connection between people and nature. The skills to make this possible were honed over the centuries. A priority was placed on configuring architecture with small pieces when spaces were designed, with a focus on horizontal and diagonal elements nestling close to the ground and using a minimum of vertical elements.

Because there are many mountains and valleys in Japan, it was impossible to bring materials from other locations, resulting in the creation of a unique style of architecture in each village. Even though Japan is a small island country, it is a treasure trove of diversity. Japanese architecture is full of hints for how we can enable the reconnection between nature and people.

An exploration of these ideas also provides hints for solving environmental problems that the world is currently facing. Over a period of many centuries, an effort was made to create an environment that is as comfortable as possible in Japan—where there is frequent rain, cold winters, and hot, humid summers—without depending on air-conditioning. This effort resulted in an impression of abundant space, even in houses that are small. Many houses were crowded into the limited flat land available, but they provided agreeable living conditions. Towns and houses were all compact, but people were happy. Large roofs were an important element in this equation. The open space created beneath these roofs shaped the environment. Spaces were separated with light screens that provided the ability to respond in a flexible way to changes in lifestyle, accommodating various activities, without depending on glass at all.

This methodology is the extreme opposite of the age of expansion and economic growth, or, in other words, the period when being large was considered meaningful. I would like to use this wisdom to design structures for our time. Architecture in this age will have an entirely different appearance from 20th-century architecture, made in the time of expansion. For today and tomorrow, we will build with entirely different materials.

“When people come to see my architecture, I ask them to touch the materials. I would like to ask anyone looking through this publication to touch the paper while doing so. It would make me extremely happy to know that people are experiencing the quality of this book, the level of which is a first for us.” – Kengo Kuma 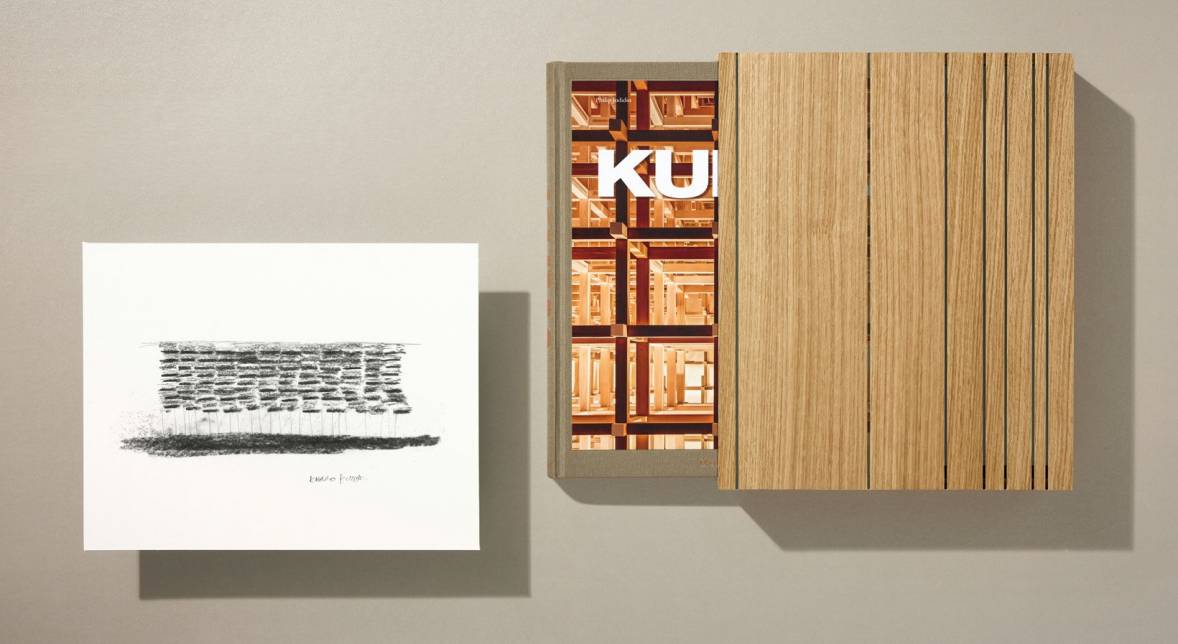 Art Edition No. 1–200
Yusuhara Community Market, Japan Photogravure of a sketch, 29 x 37.4 cm (11.4 x 14.7 in.)
Signed by Kengo Kuma
The book and art print come in a custom-built wooden slipcase designed by Kengo Kuma and produced by a local wood workshop in Japan. 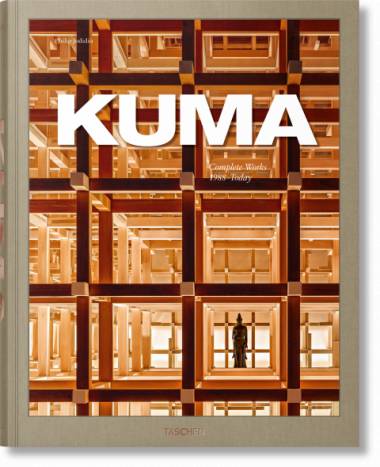 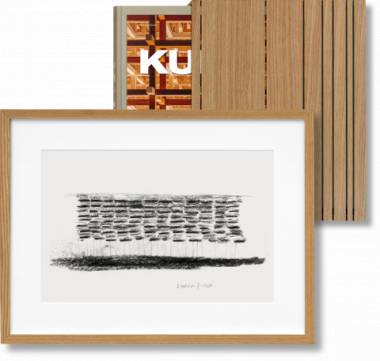 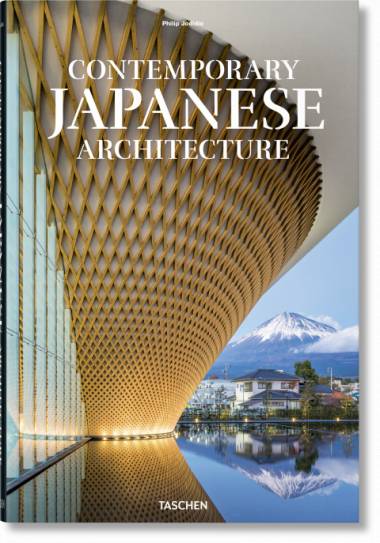