Ever since 1954, the neon Coca-Cola sign has dominated Piccadilly Circus, making it London’s equivalent (albeit smaller) of Times Square. Here in a photograph from the 1960s. © Photo: Elmar Ludwig/ John Hinde Collection

The opening ceremony of the London Olympic Games beneath a quote from the Olympic creed by Baron Pierre de Coubertin, founder of the modern Olympics, 1948. © Photo: Corbis

Preparing to fly the Union Jack from Victoria Tower of the Palace of Westminster, 1946. © Photo: B. Anthony Stewart/National Geographic Society/Corbis 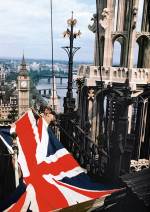 Bill Brandt’s image of a woman sleeping as searchlights rake the sky for bombers, throwing the profile of her fiancé into silhouette on the pillow, c. 1940. © Photo: Bill Brandt Archive 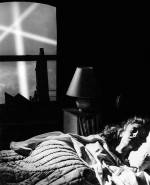 The original Apple Boutique, run by Dutch design group The Fool, who also painted the outside, was on the corner of Paddington and Baker Street, 1967. Westminster Council immediately made them paint over the psychedelic mural. © Photo: Bill Zygmant/Rex Features 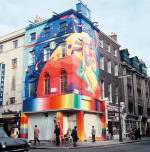 A corner shop in Chelsea, as seen by Inge Morath in 1955. The Regency terraces in the background are now among the most fashionable in the country. © Photo: Inge Morath Foundation/Magnum Photos/Agentur Focus

Children sunbathing in 1956 next to the old outdoor rooftop swimming pool at the Oasis Leisure Centre in High Holborn, Covent Garden. Since 1853 there have been baths and washhouses here. © Photo: Hulton-Deutsch Collection/Corbis 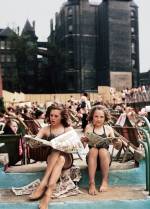 The balconies of the tenements of Queen Mary’s Buildings in Stillington Street, Victoria, made a natural theatre for a performance of a Westminster City Council Holidays at Home show for children in summer 1953. © Photo: Mirrorpix 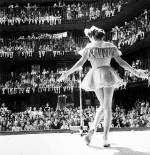 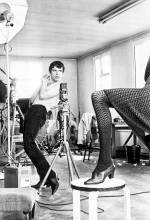 In the early 1960s, London astonished the world when this normally sedate capital suddenly produced some of the most innovative and exciting music, art, theatre, fashion and cinema in the world. British rock ‘n’ roll acts dominated the American charts; there were lines around the block for the latest James Bond film; tourists flocked to London for tickets to Joe Orton’s latest play; New York went wild for Bridget Riley’s op art designs. Conservatives world-wide were outraged by those two other sixties British exports: long hair for men and the mini-skirt.
1960s London began in black and white and ended in glorious colour, as exemplified by the Beatles, whose early image was in high contrast black and white, and who ended the decade as the Lords of Psychedelia in flowers and frills. When the Beatles moved from Liverpool to London in 1963 the city was still recovering from the war; bombsites were everywhere and housing was in short supply, but there was an excitement and enthusiasm in the air and they were a part of it. It was the energy of youth; the Baby Boomers had come of age. Forty percent of the population was under 25 and it was an era of full employment: young people had money and wanted to spend it.

John Stephen made tight-fitting, Italian-style mod clothing affordable and revolutionized men’s fashions, turning Carnaby Street from a quiet back alley into the most fashionable street in the world. Fifteen of the clothes shops there were his, all under different names: Mod Male, Domino Male, His Clothes and, of course, John Stephen. Up until the sixties, young women had left school and overnight began to dress like their mothers. Mary Quant changed all that when she opened her Bazaar boutique on the Kings Road, Chelsea in 1955. She designed clothes for active, fun-loving young women; clothes they could run and dance in. Her mini-skirts, introduced in 1963, and skinny tops were grabbed by customers before they could even be put on the racks.

Following Mary Quant’s lead, fashion boutiques sprang up all over town: Barbara Hulanicki’s Biba opened in 1964 and was more like a discotheque than a clothes shop, Foal & Tuffin, Quorum, and Lady Jane opened, and by 1967 there were more than 2,000 boutiques registered for business in the Greater London area. Mary Quant’s models became celebrities in their own right, and soon Twiggy and Jean Shrimpton were themselves famous as symbols of swinging London.

Swinging London was an invention of Time magazine when, on April 15, 1966, they ran a cover story by Piri Halasz which proclaimed “ This spring, as never before in modern times, London is switched on. Ancient elegance and new opulence are all tangled up in a dazzling blur of op and pop.”

The ‘op’ came from the kinetic art that was fashionable at the time. Victor Musgrave’s Gallery One introduced the op-art patterns of Bridget Riley in 1962; Signals showed Takis’s objects suspended in magnetic fields and the eye-stopping kinetic tricks of Jesus Rafael Soto. When Signals closed, many of their artists moved on to Indica, which is perhaps most famous for introducing the work of Yoko Ono to Britain, and John Lennon to Yoko Ono. Indica had other Beatles connections: Paul McCartney had helped to build the shelves and paint the walls. He also designed the wrapping paper, and it was in the Indica bookshop that Lennon found the lines ‘turn off your mind, relax, and float downstream’ in one of Timothy Leary’s books.
The ‘pop’ in Halasz’s article was of course the great explosion in British rock ‘n’ roll, led by the Beatles, quickly followed by the Rolling Stones, the Who, the Kinks, the Animals, the Moody Blues, the Hollies and dozens more, a sun-burst of youthful energy that quickly spread around the world. A set of new nightclubs opened to cater to this new rock aristocracy, beginning with the Ad Lib. It had a penthouse view out over the West End and lots of mirrors, the owner knew that the person his clientele most liked to look at was themselves. It was home not only to the pop elite, but the new young actors like Michael Caine and the East End photographers like David Bailey and Terry Donovan who had supplanted the traditional upper class photographers in the fashion world.

The Ad Lib burned down in 1965, but already people were defecting to the Scotch of St. James. Where the Beatles and the Stones went the rest followed. On Friday nights, Vicki Wickham, the producer of Ready Steady Go , probably the best rock ‘n’ roll TV show ever, would arrive with the stars of that night’s show: the Supremes, James Brown, the Ronettes. Rod Stewart or Tom Jones. The Moody Blues spent so much time there that a banquette was named ‘The Moody Blues Corner’. Then came the Bag O-Nails, where Jimi Hendrix jammed after hours and the Beatles went for steak and chips after the Sgt Pepper sessions. This was where Paul McCartney met Linda.

Swinging London gave way to the Summer of Love, when Allen Ginsberg presided over a legalize marijuana rally in Hyde Park, there were all night pot parties on Primrose Hill, and psychedelic weddings. The underground phenomenon in London (as the hippies called themselves) dated from a huge poetry reading by Allen Ginsberg, Lawrence Ferlinghetti, Gregory Corso and many other Beat Generation poets held at the 7,000 seater Royal Albert Hall in July 1965. It was the first time all the students, actors, photographers, alternative psychiatrists, poets and artists had all come together in one place, and they realized they were a distinct community. They started their own underground newspaper to cater to this constituency.

International Times, known as IT, provided an alternative take on the news, and also reported on the price of hash in Nepal. This was quickly followed by Oz magazine, a full colour hedonistic hippy journal, where the colour overlays often obscured the text. It was required reading as you walked down the Kings Road to buy hippy finery at Granny Takes Trip, Hung On You or Dandy Fashions, the new boutiques that were run by, and for, hippies and rock stars. The hippies had their own club, the UFO Club, whose house bands were the Soft Machine and the Pink Floyd. The launch party for IT was held at the Roundhouse, a large round engine shed in Camden Town, North London, that became known as the centre for underground events.

The most spectacular underground event was IT’s 24 Hour Technicolor Dream, when 41 bands gathered for an all-night rave at Alexander Palace, a huge Victorian glass and iron pleasure palace in Muswell Hill. The high point of the night came as dawn broke through the huge rose window of the east wing, just as the Pink Floyd were playing ‘Interstellar Overdrive’, one of the most iconic songs of the whole underground scene.

Inevitably it came to an end, though some see the period as extending from the Beatles to the punks: 1963-1977. However you date it, for a brief period, mid-century, London swung.
Partager
TASCHEN’s carbon pledge
Magazine with a mission

US$ 70
TASCHEN’s carbon pledge
Magazine with a mission