The women behind and in front of the camera 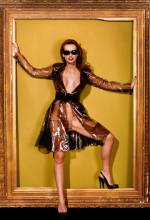 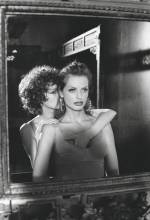 Why is that I think spontaneously of Jean Fouquet’s marmorean Virgin with Child (circa 1450, Royal Museum of Fine Arts, Antwerp) when I see the photographs that will constitute The Book of Olga? Is it because the curves of the modern Olga, as revealed by Bettina Rheims, remind me of the absolutely perfect globe of the breast of Agnès Sorel, the favourite of Charles VII of France, who lent her features to this Virgin? Is it the azure blue of the sky and the vermilion of the handsome car, matching the model’s lipstick, that strike me here and awaken my memory of the impact of Fouquet’s Virgin, set between two rows of angels, one of which seems, strangely enough, to have been soaked in a bath of red dye, the other in a bath of blue? And did not Bettina Rheims once tell an interviewer that she has “always been fascinated by representations of the Virgin”? Or is it the lowered eyes of Agnès Sorel, lost in a vision that seems to carry her beyond her own beauty and even the child that she is barely holding on to with the tips of her fingers, which mix in my mind with those of Olga, who is sometimes so deeply lost in her dreams that she seems to be absent from her magnificent body and also from the provocative staging to which the photographer has subjected her body? Whatever the reason, the paradoxical art of Bettina Rheims, who allows us to approach the most joyous excesses of colour, exhibitionism and voyeurism, the better to transport us elsewhere, into a place where eroticism is one with humour and deep humanity, is illustrated to particularly telling effect in this work.

The photographs were commissioned by a husband proud of his wife’s beauty, and who loves to have major photographers capture that pulchritude and exhibit it to the public

For all this, there was no guarantee that the game would be won. And when I say “game”, I am simply reprising the metaphor used by the artist herself. Bettina explained her way of doing things to me as follows: “All the elements of the ‘envelope’ are determined in advance, the setting is chosen or composed for the shots, the clothes that the model will wear, her hair, to get her in the right state. In my mind I have a very precise idea of the person, but only a hazy one of what she must do. I may get the feeling that I am getting nowhere, and yet I am making progress. It’s like a game of tennis. I serve. The other person gets it, or maybe doesn’t. I wait. She returns. I use what other people bring me but I don’t know in advance what that will be, because most of the time I photograph people I’ve not met before. The game develops as it goes along. The day before, there’s always the fear that this time things won’t work out. One might think it gets easier and easier, but it doesn’t because, it seems to me, what I’m looking for gets less and less spectacular. I’m following a thread that’s getting finer and finer, and it occurs to me that one day there won’t even be a thread any more. Still, I’ll keep walking.”Now, when it came to making these three sets of photographs showing the metamorphosis of the model into three different characters, sometimes with hardly anything in common—the pin-up, the 18thcentury marquise and the dominatrix/slave in an MS session—the game was even more risky than usual because this time there were three players!

The circumstances surrounding these photographs, unprecedented for this artist, were as follows: they were commissioned by a husband proud of his wife’s beauty, and who loves to have major photographers capture that pulchritude and exhibit it to the public. In this he is simply illustrating the fundamental law of the circulation of desire which ordains the presence of a witness or indeed of as many witnesses as possible. “Eroticism begins with the third party”, as Salvador Dalí used to say. Even kings were subject to this law: to the best of our knowledge, Charles VII did not object to his mistress being represented as an in-decent Virgin, and nor did Henri II balk at his official mistress, Diane de Poitiers, being identified as a naked Diana the Huntress (circa 1550, Musée du Louvre, Paris), or Henri IV demur when his lover, Gabrielle d’Estrées, appeared with her sister, both of them hieratically nude from the waist up, in one of the most fascinating paintings of all time (circa 1594, also Musée du Louvre, Paris).We may even suppose that the kings saw these images as presenting History with evidence of another kind of power and wealth, in addition to the power and wealth represented in official portraits.

Of course, conditions today are very different from those in the times of the absolute monarchs.Whatever the power afforded by his work and fortune, the citizen of a democratic society is exposed to the gaze and judgement of his fellow citizens. To this must be added the fact that today wives are also mistresses. Our modern conception of marriage and love no longer makes the same distinction between the mother of one’s legitimate children and the woman with whom one shares sensual pleasures, which means that to exhibit the latter is also to exhibit the person who officially accompanies you in all the circumstances of social life, and that requires a lot more nerve.What struck me at once when I met Olga and her husband was the tranquil self-assurance with which they both went about staging their desire and publishing the images that reveal it. In their own country they have been attacked and taken to court on the grounds that they supposedly offended the religious beliefs of certain citizens (that reminds me of the problems Bettina Rheims had with conservative Christians over her I.N.R.I. series of photographs). They defended themselves and have continued, and will continue to assert the rights of individual freedom in this sphere.

Besides, it is not as if we were expected to confuse these images with real people.When I asked Olga if she didn’t feel embarrassed to appear in these erotic compositions, she told me she didn’t, because it was all a game, and the person we see in the photographs is not really her, but a character. This woman who poses in a red waspie, who bestrides a young man on all fours and tears her fishnet tights to reveal a jewel attached to one of her labia, is well endowed with common sense. She knows better than many supposedly level-headed women and men who believe hysterically that they are being robbed of a part of themselves when someone takes a photo, that an image is only an illusion. As to those who think they know something about her person because they have seen her body from top to bottom and back to front, I would ask them to look carefully at the last pages of the book. In the penultimate photo, Olga is naked and stands with her hands behind her back, leaning modestly against a wall, with no artifice other than the mask over her face. As for the last photo, it is Rheims’s clever homage to Gustave Courbet: Olga has taken the pose of The Origin of the World: thighs, sex and torso, without the head. These two images are contradictory: the reserved postures of a schoolgirl in one, and the open display of flesh in the other, but in both the body abandons itself precisely when the person dwelling within it absents herself, in collusion with the person making the images. Bettina tells me that as a general rule she can “only work when the other person has desire. It is their desire that elicits mine”. How then did she react in the situation that concerns us here, when asked to respond to the desire of two people who, although united in marriage, will always be two distinct individuals? Bettina asked the husband not to attend the photography sessions, but we can imagine the weight of his virtual presence: he was the patron who, as Bettina attests, showed total respect for the artist’s freedom and encouraged her to be bold; and he was without a doubt the main spectator to whom the model’s poses were addressed. But what was the model thinking of when, whip in hand, her face expressed infinite gentleness? Or when, with a dildo replacing the whip, she seemed to be deep in conversation with her best friend? “We became friends”, confides Bettina.

This woman who poses in a red waspie, who bestrides a young man on all fours and tears her fishnet tights to reveal a jewel attached to one of her labia, is well endowed with common sense

For many years now, Bettina Rheims has been working in an enigmatic region of eroticism. She likes to twist the eternal stereotypes, which of course means male stereotypes: here, the pin-up covered in diamonds—complete with cigar!—, there the marquise with her appetites and perversity, or the body as object chained and bound. This has brought its share of criticism from feminists, and yet (as I myself can confirm), and perhaps because of her displaced treatment of those stereotypes, sometimes her works move women more than they do men. How did she manage, then, in this particular situation, when her work subverting the clichés of desire put her in the position of go-between, in the middle of a man’s and a woman’s desire, of the kind of interplay whose protagonists are, as we know, very possibly not fully aware of their ultimate goals? Does one always measure the extent of one’s expectations? Does one really know what one is after when one expresses one’s desire, however freely one does so? These were the kind of questions faced by the artist.

Regarding the accessories that she put in her model’s hands, Bettina admits straight out that “at first I would have preferred her to really use them”. However, she quickly understood that she would have to work with the model’s own distance, and so she began dressing Olga like a cabaret dancer and getting her to play with apples, on the lawn, like a little girl, and put a young man at her feet, and another in her arms, and at the same time captured the fixed look she gave her, and thrust her against a wall in a posture of abandoning herself to pleasure, getting from her the most luminous expression in the whole book. Such is the ambiguity of Bettina Rheims’s action in exposing the women she photographs—exposing them to the risks of these games of seduction and to our gaze, while affirming that “I was protecting her”. In fact, this ambiguity is typical of this artist, who has photographed respectable young women in states of undress like those of prostitutes, or icons of beauty with their bodies covered with sweat or bruises, or symbols of life that turn out to be stuffed animals, or again, the mutant bodies of those who have chosen to change sex. She has understood that this is what she does: show equivocal moments, but show them raw.
Compartir
share twitter

Bettina Rheims. The Book of Olga