You and the Night and the Day and the Music; Yasuji Watanabe 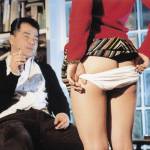 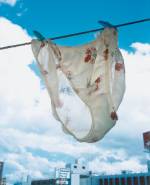 Wife-Swapping Club, Chiba. “In Japan, One is Never Far from a Camera”; Joan Sinclair

I said Dian and I are co-editing this book but that is a misnomer since everything passes in front of the eyes of Benedikt Taschen. He is the publisher. He sets the ground rules. He won’t publish anything he doesn’t like. It is really his book and Dian and I simply set the table. The routine was Dian and I would be sent out looking for photographers like the US Cavalry would send Indian scouts looking for water. If we found someone on the Internet, at a gallery, in a book or recommended by another photographer, she and I would share jpegs of the photographer’s work. The ground rules were: nothing explicit. No overt sex act.No model looking too young, like less than 18.No heavy bondage. No hard dicks and none where the male is more than a prop for the woman. No women with penises. The work had to have a distinctive quality or style. No regular “girlie” photos one might find in the better adult newsstand magazines.

After Dian and I had found the work of over 100 photographers, the editing began. Benedikt began to look through the work, making faces like Fernandel, the great French actor/comedian. He’d twist his lips and raise his eyebrows and say,“Why not?” and put it in the “keep” pile or toss it in the “rejects” pile. He is brilliant to watch. He makes few mistakes, though I often can’t follow his logic.

Art and photography
It is interesting to me and a bit unfair that artists like Picasso, Schiele or Grosz can sketch or paint explicit sex acts and the work is labeled illicit and if the same subject is handled in a photograph it will be labeled pornography. One is exploration, the other is considered exploitation.

What’s on the wall. What’s in the book
Photographer Aaron Hawks and I have spent many nights listening to jazz and discussing why and what we do.We agreed that photographs seen in a book or on a wall are really portraits, not of the model, but of the photographer. How can we be accused of objectifying a woman when it is really the photographer on the wall? One of the things we are telling the world is we can attract beautiful women. To most people it isn’t an issue. I was always too insecure to go alone to a party. I had to have a gorgeous woman on my arm. I am learning to let go of that but …

Without film
I’ve met every woman I’ve been involved with for the past 44 years by way of photography.“Hello, I’d like to take your photograph.” I met my wife of 17 years in my friend David’s studio when he was doing “test” shots of her. I got involved for seven years with Gwen, who started out as my model, then muse, then obsession. Later, there was Mississippi Sarah and Ximena from Madrid.
Is photography an excuse or a profession? I wonder who we’d be without a camera. The great Japanese photographer Nobuyoshi Araki said in his recent book, Self, Life, Death published in 2005, “Between a man and a woman is a camera.”

In conclusion
The photographs in this book are all portraits of the photographers. They are all very personal. The images can act as sparks to one’s imagination.Which pages turn you on? Is it the one where she is smoking or is it the shape of her ass in the light or the attitude in her eyes that you are responding to? Which photographs trigger an early childhood memory? Who does she remind you of? I remember, years ago, attending a lecture given by Helmut Newton. It was held in downtown New York City and the audience was hip and they loved him. He spoke about having his heart attack and how, while in recovery, he realized that he would shoot only that which he loved. He would shoot only from the heart he almost lost. At the end of the evening there was a question and answer period and the last question came from a tall, young and beautiful woman who stood up and asked: “Mr.Newton, do you have a date for dinner tonight?”