Belle of the ball

TASCHEN Library sells for USD 2.7 million at amfAR auction for the fight against AIDS

May 20th, 2016, Cap d’Antibes – An unprecedented TASCHEN library, curated for amfAR for the 23rd edition of Cinema Against AIDS, reached a winning bid of $ 2.7 million at last night’s gala auction.

The library is housed in a glass wall pavilion designed by Jean Prouvé and features 444 TASCHEN titles, including 60 coveted Collector’s Editions. Special highlights include the monumental Sebastião Salgado: Genesis, launched in conjunction with the blockbuster touring exhibition, the SUMO-sized Annie Leibovitz, and an edition of TASCHEN’s long sold-out Helmut Newton SUMO, a rare collectible gifted from Benedikt Taschen’s private collection.

The winning bid contributed to a total of more than $ 25 million raised for amfAR’s AIDS research programs, dedicated to advances in HIV prevention, treatment, and care.

About amfAR
amfAR, The Foundation for AIDS Research, is dedicated to ending the global AIDS epidemic through innovative research. Since its founding in 1985, amfAR has accelerated the pace of HIV/ AIDS research and contributed to numerous breakthroughs that are extending and saving lives around the world.

In the course of its 25-year history, amfAR has invested more than $ 366 million in its programs, spawning numerous significant advances in HIV prevention, treatment and care. Through its Research program, amfAR is advancing efforts to prevent HIV infection in those who are vulnerable and to improve treatment for people living with HIV/AIDS, with the ultimate goal of eradicating the virus. Through its Countdown to a Cure for AIDS initiative, amfAR plans to invest $ 100 million over the next few years with the aim of developing the scientific basis of a cure by 2020.

Since amfAR Founding International Chairman Dame Elizabeth Taylor hosted the first Cinema Against AIDS in 1993, these signature amfAR benefits have played a pivotal role in focusing attention on the fight against AIDS. The evening’s live auction is famous for the impromptu participation of celebrities and one-of-a kind auction lots. Past events have been chaired by amfAR Global Campaign Chair Sharon Stone, President Bill Clinton, Demi Moore, Sir Elton John, and Madonna, among many others. Guests include many of the celebrities and personalities associated with the Cannes Film Festival. Memorable auction lots include the sale of Jeff Koons’ sculpture “Coloring Book” for more than $ 13 million; the dazzling “Red Collection Fashion Show” curated by Carine Roitfeld, sold for more than $ 4 million; and an intimate dinner for 12 at Andrea Bocelli’s private residence, complete with a performance by the legendary tenor, which sold for more than $ 1 million – twice!

About Jean Prouvé
Jean Prouvé (1901–1984) was a 20th-century pioneer in the production of furniture and architecture, imbued with the creative philosophy of a group whose principal aim was an art/industry alliance offering access to all. As a founding member of the Union des Artistes Modernes alongside Le Corbusier, Pierre Jeanneret, and Charlotte Perriand, Prouvé developed a “constructional philosophy” based on rational fabrication and functionality. Seeking to make a clean break from the past and struggling against elaborate designs in style at the time, artists of the union developed and produced art, architecture, and furniture that emphasized design over decoration. Prouvé taught at the School of Arts and Crafts (Conservatoire National des Arts et Matières) from 1958 to 1971. He was elected a member of the Academy of Architecture in Paris in 1972.

The TASCHEN library for amFAR is housed within a Prouvé designed Total Filling Station, commissioned by the energy provider in 1969 in response to the company’s mass-production policy for its gas stations. Prouvé believed that “a building has to be made of the smallest possible number of elements,” and this work is an exploration of just how far this maxim could be applied. Inspired by the Dymaxion dome house designed by Buckminster Fuller in the 1920s, the architecture of the filling station uses a radiating central-plan structure of galvanized steel sheet, with a central cylinder and perimeter poles. The façade comprised 13 polyester and glass panels. This minimalist approach meant the structures could be quickly assembled, allowing them to become functional and profitable filling stations quickly. The station’s nearly circular shape allows the structure to be easily identifiable from the road – a requirement of Prouvé’s client. The simplicity of its design combined with the innovation of the materials previously used exclusively in the automobile industry makes this piece as revolutionary as it was popularly embraced. With the Total Filling Station, he produced perhaps the most technologically advanced, functional architectural work of his storied career and shows that his blend of avant-garde spirit and humanist concerns has lost none of its relevance. To quote Le Corbusier, “(Prouvé’s) postwar work has left its mark everywhere, decisively.” 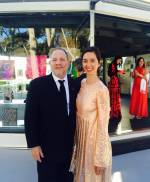 Compartir
In Memoriam
In loving memory