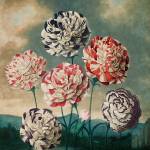 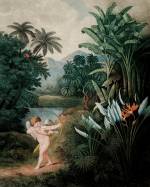 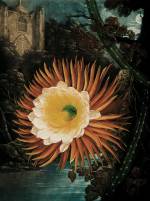 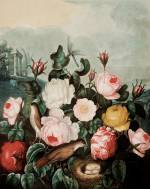 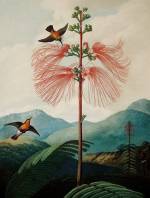 A man ruined by his impassioned quest
Writers and bibliophiles alike frequently lavish praise on The Temple of Flora by Robert John Thornton (c. 1768–1837)—a curious phenomenon in view of the work’s relatively modest 28 plant illustrations. However, anyone who has had the rare opportunity of leafing through an original edition of this monumental work, such initial disconcertion soon gives way to unexpected but comprehending awe. A single glance at its pages affirms that very few—if any—botanical volumes come close to matching the originality and splendour of the Temple’s plates.

As the product of Thornton’s impassioned, well-nigh obsessive personal and scientific veneration of Carolus Linnaeus (Carl von Linné)—foremost botanist of modern history—the work as a whole is indeed curious. Dedicated to Flora, the Temple was intended as a monument to the Swedish botanist, whose binomial classification system lent order to the plant realm.

The publishing history of The Temple of Flora is, by contrast, anything but clear and well ordered. The first instalment of the series was published in London in 1799; eight years later, however, the project ground to a premature halt, when the financially ruined Thornton could no longer pay for the completion of the remaining plates or the printing costs. These financial setbacks, together with repeated alterations made to the plates over the years, apparently also led to a lack of continuity in the later instalments of the series, some of whose subscribers did not receive all fascicles of the work. For this reason, extant editions of the Temple betray variations in numerous details.

Over the centuries, illustrations that were to appear in color had to be painted by hand. Not until the 1730s did individual herbaria become available that were produced in color by means of an English printing technique. Making use of several intaglio techniques such prints, generally in large format, appeared in a number of illustrated botanical works published in the second half of the 18th century. Thanks to highly skilled graphic artists working together with equally talented painters, engravers and printers, it became possible for the first time to represent plants with a previously inconceivable naturalness and beauty.

It was precisely this high standard of illustration in botanical books that Robert John Thornton, on the one hand, wanted to surpass with his Temple of Flora; on the other hand, as an Englishman, he wanted to break the Continent’s hegemony in this field, which he found painfully embarrassing. He clearly expresses this desire in his dedication of the Temple to Queen Charlotte.

However, we must bear in mind that the Temple constitutes “merely” one third of a more comprehensive publication, New Illustration of the Sexual System of Carolus von Linnaeus, which also appeared as a separate work. When one considers Thornton’s dedication to Queen Charlotte together with his self-confident claims expressed in his New Illustration—as well as the Temple—as both a monumental homage to Linnaeus and proof of the superiority of British scientists, artists and craftsmen over the writers and artisans of those magnificent botanical works that had appeared in the previous decades on the Continent (particularly in Germany and France), we may assume that, from the very beginning, Thornton intended to seek out only the very best artists for the paintings and to employ equally skilled engravers for the transferral of the images onto plates.

Thornton’s inheritance allowed him to commission renowned English painters to depict the desired plants as impressive illustrations for his botanical work. In order to tap at least one further possible financial source (in addition to the lagging book sales), Thornton also set up a gallery in London under the name “Dr. Thornton’s Linnaean Gallery”. But all his efforts proved futile. Thornton had to break off his ambitious project prematurely. He saw himself forced to inform his subscribers that the project would not contain the 70 different plant plates that had originally been planned: regrettably, less than half of the Picturesque Botanical Colored Plates would be completed. In order to rescue as much as possible, Thornton decided to hold a lottery. The hope of saving his project financially remained unfulfilled. In his attempt to realize his dream over the years, Robert John Thornton plunged himself into financial ruin. His bold design to create a magnificent work with famous artists at his own expense had failed.

The plates in The Temple of Flora remain outstanding and unique. Neither before nor after Thornton has anyone created such compellingly monumental images of flowers, set portrait-like in their typical landscapes. Thornton’s achievement represents an early document of a scientific interest in botany, which is expressed with the formal language of Romantic sensibilities—as a reflection of a fascinating age. To this day, the plates continue to exert an extraordinary charm. Thornton presents the plants in their original environments, or at least in those the painters assumed were original. For both the botanist and the layperson, it is important to be acquainted with the natural environment of plants. Flower lovers and garden enthusiasts alike will have longed to possess the exotic plants depicted in the Temple’s pages and to introduce the extravagant varieties into their gardens.