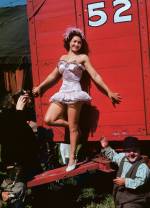 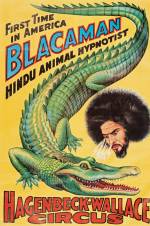 The birth of American popular culture
It is sometimes difficult to fathom the importance that live popular entertainment had on everyday life prior to film, radio, television, and the Internet. Until the development of radio broadcasting in the 1920s, the only home entertainment center that could be found in American homes was a parlor organ or a piano—grand or upright, tuned or out of key—and in the most fashionable homes a green, felted card table around which family and friends gathered during cold winter evenings. But if you wanted true entertainment, you went out to the theater or to a nearby vaudeville house or—when it came to town— to the circus. Before the advent of the moving image, the circus was the great purveyor of fantasy: “The circus is the only spectacle I know that, while you watch it, gives the quality of a happy dream,” said Ernest Hemingway.

Live entertainment at this time, in all its forms, was the equivalent of today’s television. It could be distracting, funny, often tacky, sometimes interesting or moving—and even educational, or at least pretend to be so, which was useful in a country where stern puritanism still prevailed. For example, legendary entrepreneur P. T. Barnum, who defined advertising’s tricks of the trade decades before his involvement with the circus in the early 1870s, named the theater in his American Museum in New York City the “Moral Lecture Room.”While Barnum’s museum was a hodgepodge of natural history, curious displays, and sideshow exhibitions, he nevertheless knew that the voyeuristic pleasures they offered needed to be delivered with a semblance of respectability to be truly successful.

A Window Onto the World
The American circus functioned like a blend of Animal Planet, the National Geographic Channel, and the History Channel, but it avoided the unsavory path of tabloid reality that vaudeville eagerly embraced with its presentations of notorious celebrities known for tales of sex, crime, and licentiousness. The businessmen behind the American circus consciously defined the circus as wholesome family entertainment, in large measure as a result of Barnum’s show business acumen and savvy marketing strategies. Barnum, who was a prominent member of the Universalist Church, always played the family card and was keen to stress the propriety of his various exhibits. But Barnum was also a showman as well as an impresario, and he knew very well that true success depended on broadening his audience. His shows had to please both the straightlaced Anglo-Saxon puritan and the fun-loving German immigrant, and had to appeal to men and women alike, adults and children. The circus had to have universal appeal to be profitable, and Barnum knew from his experience with the American Museum that exoticism was a hot ticket. There were riches to be made in the presentation of the world’s wonders, even if those wonders were fictitious.

The American circus, not unlike the giant fairs of medieval Europe, pushed the doors wide-open onto the outside world, which for a long time had been known only through written testimonies and pictorial renditions. This exotic and thrilling world had taken shape in people’s imaginations—even when it was pure invention. But the circus brought its extraordinary reality right to your doorstep. The mysterious “cameleopard” of yore at long last materialized as the amazing giraffe. Africa, Asia, and the Amazonian jungle ceased to be mysterious lands known only to fearless explorers. The circus brought them—or at least colorful and often fanciful interpretations of them—directly to you as live entertainment…

Every Free Inch a Billboard
Where else could you see, live and at close range, a group of graceful giraffes, a hippopotamus or a rhinoceros, the impressive sea elephant, Bengal tigers or Atlas lions, the bizarre okapi, a herd of zebras, the antics of a family of chimpanzees, and the mighty elephant, the undisputed king of the menagerie? Circuses plastered barn walls, wooden fences, and the sides of city buildings with thousands of posters showing roaring lions and tigers, charging rhinos, and furious hippos attacking natives hunting on the river Nile. These powerful and colorful depictions became an integral part of circus magic, a tempting tease of the wonders that awaited you. The circus was the main user of printed advertising at the time. Larger shows plastered thousands of lithographic posters each day; no other industry ever came close to these numbers. A few printing companies specialized in this very lucrative business, but the artists who churned out the true masterpieces of circus advertising worked for the Strobridge Lithograph Company offices in Cincinnati, Ohio, and New York City. The quantity of artwork this company produced during the golden age of the American circus comes in staggering numbers. Some designs were elaborate, others relatively simple, some were elegant, many were gaudy, but all were colorful, charged with energy, exalting the mundane, improving the extraordinary, exaggerating the extravagant. Even before you saw the actual show, the circus was already delivering its wonders far and wide with its advertising.

The Last Unknown People on Earth
Among the other wonders that the circus carried in its cornucopia of attractions was the uniquely American sideshow, the popularizing of which was Barnum’s most distinctive contribution to the American circus. He didn’t originate sideshow attractions (they had been traveling with American circuses since the 1850s at least), but they were a feature that he had promoted and cultivated with bold marketing techniques over many years. When the legendary showman accepted the invitation of circus entrepreneurs W. C. Coup and Dan Castello to join them in 1871, he brought to the collaboration what he would be best remembered for: an itinerant version of his American Museum in the circus sideshow. Though not as grand and educational as it pretended to be, his sideshow featuring “the Wild Men of Borneo,” “the Aztec Children,” and Zip, the “What Is It?,” evoked dreams of mysterious wonders from lost and faraway worlds.When they came to the circus, audiences were ready and willing to dream.

The advertised exoticism was sometimes legitimate. Crowds gazed in awe at the “Genuine Ubangi Savages,” with “mouths and lips as large as those of full-grown crocodiles,” who came from an African tribe of platelipped women that lived in the depths of the Belgian Congo jungle. Or at “the Giraffe-Neck Women From Burma,” who came from the Burmese Padaung tribe where women coiled brass around their necks to give the illusion of elongating them as a sign of beauty and tribal identity. Ringling Bros. and Barnum & Bailey advertised them in 1933 as the “greatest educational feature of all time!” They generated tremendous curiosity and were a huge hit. The circus was a live substitute for today’s National Geographic Channel— although National Geographic would certainly never have used the word “Ubangi,” which is a river that runs between the Republic of Congo and the Democratic Republic of Congo and is nowhere near the region where the tribe actually came from. Roland Butler, one of Ringling’s legendary press agents, had picked the name on a map. It sounded more exciting than Belgian Congo, the tribe’s actual homeland. The circus, after all, was meant to sell fantasy.

It is not surprising that the American circus enjoyed its golden age in the Victorian era, shortly after Europe expanded its colonies deep into these unfamiliar territories, triggering a new interest in exploration. The “civilized” world became increasingly curious about other cultures, and the circus—especially the American circus—was ready to satisfy this curiosity. It did this on Circus Day first with its posters, then the menagerie, then the sideshow, and then with the show itself, most notably offering grandiose spectacles and pageants that only the circus could produce on such a phenomenal scale. The circus was like an extravagantly illustrated travel or history book.

Kings, Queens, and Heroes of History
Grand spectacles and lavish pageantry were a trademark of the American circus.... The American circus had become a gigantic traveling affair where theatrical subtleties didn’t have a place. The old hippodramas were replaced by pageants—stunning spectacles, or “specs” in circus parlance. They were richly costumed parades involving an endless procession of characters on horse and foot and, of course, including animals from the vast resources of the menagerie. They were elaborate and theatrical versions of street parades, but under the big top. True to form, they often pretended to be educational, such as Ringling Bros.’s Joan of Arc, produced in 1913 and advertised as a “magnificent 1200-character spectacle” with “300 dancing girls in entrancing revels.” It was undoubtedly “a dazzling scene of life, color, and action” as proclaimed, but the real French saint-warrior might have felt out of place amidst 300 girls cavorting in revels under the big top. Productions such as these were grand, lavish, spectacular, colorful, and on a scale that no theater could ever come near to replicating.

The history of America’s European past was not always that familiar to circus audiences, which consisted of a broad spectrum of the population, including a good percentage of recent immigrants whose formal education could be lacking. The circus took care of that too. Bailey had commissioned Imre Kiralfy, the Broadway director and producer, to stage Columbus and the Discovery of America (1891–92). The spectacle Cleopatra, Queen of Egypt (1912) brought from the past “the grandeur and opulence of Cleopatra’s court,” even including an “Antony” character to give the ensemble an additional historical flourish. These pageants, like the menagerie, provided a view of faraway lands and magic kingdoms where maharajahs and their courts paraded on an endless procession of “sacred” elephants. They were also excursions into the past, allowing glimpses of history— however distorted they might have been. Only when Cinemascope and Technicolor appeared in movie theaters did the circus have any real competition. But for all their grandiosity, movies never had what the circus could offer: real-life pageants with the sounds, colors, and smells of living wonders.