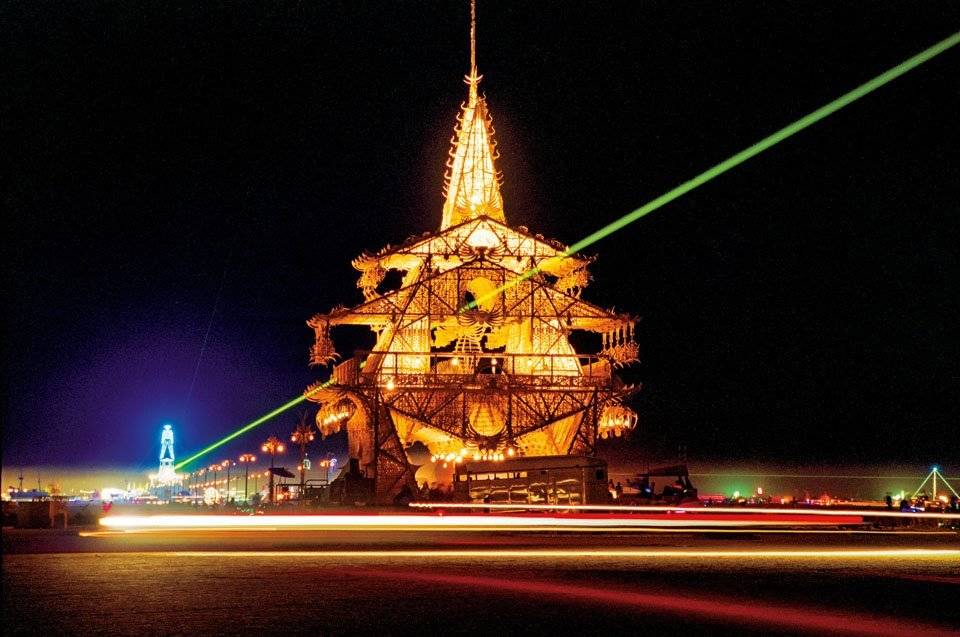 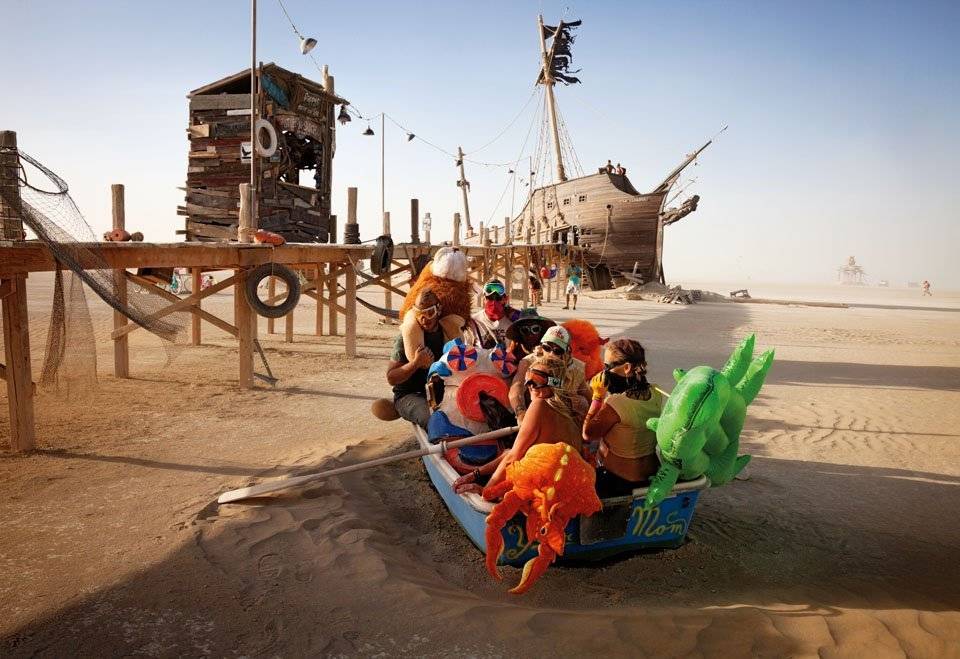 How would you describe Burning Man to someone who has never been there?
At its simplest, Burning Man is a temporary city of 65,000 inhabitants that springs up, for one week a year, on a vast windswept desert plain in northern Nevada. But that description doesn’t do the event justice, since it’s a unique and multifaceted creative experience that’s different for each participant. For some people it’s just an awesome party. For others, a social experiment, a spiritual journey, a space for free personal expression.

Just as the event is a blank canvas for people to express themselves, the desert (also known as a playa) is a blank canvas for building and showcasing massive physical art. In fact, it’s become the greatest show of interactive, site-specific and temporary art on the planet, and one I’ve been lucky enough to document over the past 16 years.

What are the integral elements of the event?
Art is absolutely central. There are countless other festivals around the globe, but most trade in music, performance, or religion. Very few are focused on art. And interestingly this means that the cult of celebrity which dominates most festivals (“who’s playing the main stage this year?”) barely exists on the playa. Art is definitional to the event, from the very first Burning Man figure in 1986 to the massive works that characterize the event today.

Community is also essential. The vast desert inspires the creation of enormous installations that you couldn’t possibly build or show in a gallery. And that transforms everything, since the scale is too much for a single artist to pull off. Nowhere else do teams of friends and strangers, and occasionally even enemies, gather together to build such vast works of temporary art.

Interactivity is another key component. Burning Man art is meant for you to explore and interact with. It’s not just a gallery where you walk in and gaze at small works from a distance. Artists are encouraged to build creations that transform viewers into participants.

Finally, you have the lack of overt commercialism. We live in a society dominated by financial transactions at every level, and there aren’t a lot of places outside the home and places of worship that you can get away from that. But at Burning Man you can. Aside from ice and coffee, nothing is allowed to be bought or sold on-site. The event promotes what it calls a “gifting economy,” where people are encouraged to give to others freely and without expected obligations. That's a fascinating and refreshing cultural experiment.

What was your own first experience of Burning Man?
My first time was much like many other people’s. It was spring 1998, I was looking for a cool weekend stop on a summer road trip, and perhaps for a bit of a party. I’d seen photos of the first desert Burning Man back in 1990, published a few months later in the Whole Earth Review magazine, but I wasn’t prepared for what a vast bustling city of art and experience I’d encounter. I had to slow down and try to learn these mysterious new cultural conventions. I felt I’d been transported to an alien planet, or to a movie set where the cameras aren’t turning. And everything seemed handmade and scruffy, yet also incredibly genuine.

I’d travelled alone from Canada, and since I had no-one to share the experience with, I found myself recording the art photographically. That was the germ for what became a 16 year saga that took me to the desert year after year, cameras in hand.

Has any artwork been a particular standout?
That’s a really tough one. It’s not just a matter of hurting the feelings of all the artists I don’t name — it’s just impossible to name a single piece that transcends all the others. But I think that the most powerful collective group of works would have to be the temples of Burning Man. Each year a new temple is constructed then burned to the vast desert floor.

First created by David Best and his team, these temples have become the emotional core of the event in ways that nobody expected. They’ve become a secular sacred space, where people can gather to grieve and meditate on loss of any kind. By the end of the week, when the temple is finally burned, it’s festooned with notes, letters, personal artifacts that allow each participant to add a bit of themselves to the structure. This kind of shared personal experience of grief is not a phenomenon you’d expect at your usual summer festival.

David designed many of these temples, but there has been a rotating cast of artists, designers, and architects who have built many of the others. Each temple is different, often stunningly so, but in a funny sort of way each temple is also the same one, since they all have the same intent and emotional gravity to them.

How has the event developed over the last 16 years?
It’s certainly changed in size — the event today has over four times the population than it did my first year of attending. The art is of a bigger and grander scale, as budgets and ambitions have increased. It’s become more international — people come from all over the planet.

But Burning Man has also hit limits to growth. In the early days it felt it could soar forever. It seemed there were no ceilings, no bounds. Only the most basic rules were introduced in 1996, like no driving around and no guns. But the two-lane road that winds its way north across the desert isn’t any wider today than it was 20 years ago. And this has put a fixed limit – about 68,000 – on the number of people that can reasonably be accommodated. Nowadays tickets are in heavy demand, and there’s a desperate sense of hunger to get one that simply didn’t exist before.

That said, some things don’t change. The dust, the vast scale of the desert against which we’re all incomprehensibly small creatures, the gatherings of friends, the incredible art, the sense of open invitation to be who you want to be – that’s always part of Burning Man.

How does your book hope to capture the event?
My Burning Man photography started as a very personal exercise, though it’s grown to be more than that. A big part of playa art is its spectacular transience; its temporary magic. Most of the wood sculptures are burned and gone, and even the metal pieces may never be seen again in the context of the vast plain of the desert. It’s a truism, but by photographing it all, aspects of the show will live on even in the memories of those who haven’t been there.

It’s a tough place to work. Not only is the environment harsh, with dust storms whipping out of nowhere at the slightest provocation, but it’s also so visually complex and layered. Learning the best way to isolate and compose elements of the scene to tell a story, evoke a sensation, or convey an installation has taken years. Everything is tied in with somebody’s story, and that’s one of the things I wanted to get across in the book. I wanted the narrative and the photographs to be linked inextricably, and since I created both, I was able to do this.

Finally, when it came to making the book itself, one of the biggest challenges was organization. I have some 65,000 photos, and the best way to condense that down to a single book of 280 pages wasn’t obvious. The answer came from a Taschen designer — eternal cycles. You'll notice that the book is structured around the time of day. We begin with the warm light of dawn, move to the sweltering heat and dust of day, shift to the cooling of sunset, and finally end with the carnival of night.

Conceptually, then, Art of Burning Man encapsulates the ultimate moments on the playa. 16 years of Burning Man art, boiled down to one perfect idealized day in the desert.