American sailors clown for the camera, circa 1944. Servicemen commonly posed for “joke” photos involving hugging, kissing and other affectionate acts in the full confidence of their heterosexuality. 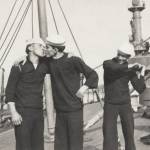 American sailors are hazed during an Equator crossing ceremony, circa 1944. For “polliwogs”—those who’ve never crossed the equator—to become “shellbacks”—those who have—it’s necessary to undergo humiliation at the hands of their comrades. Here, sailors wear their underwear backwards and bow in supplication

A U.S. soldier entertains his buddies with a drag show, circa 1943. The absence of women made drag performance a popular and well-accepted form of comedy entertainment during World War II. 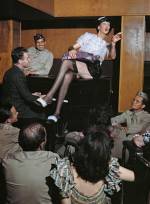 By 1914, at the start of World War I, American troops had their choice of two small, relatively inexpensive and uncomplicated film cameras: the basic Kodak Brownie box camera, introduced in 1900, and the Vest Pocket Kodak, from 1912. By World War II, Americans and Europeans were equally liable to have personal cameras: the inexpensive Kodak Brownie and 35mm Argus C3 for GIs, the 35mm Zeiss Ikons and Leicas for the Germans. Leica actually produced a model specifically for Luftwaffe troops during the war, supplied free to thousands of men. English and Australian troops also had Kodaks and Agfas, as well as the English 120 Ensign Ful-Vue box camera. Japanese officers often had German Leicas and Zeiss Ikons, but were less inclined to document the sort of horseplay common elsewhere.

Whether 127 film or 35mm, most of the prints produced for servicemen were small, ranging from 2 by 2 to 9 by 7 inches, with most around 3 by 4 inches. It didn’t occur to the average amateur to ask for enlargements back then—and even if it did, the image selected wouldn’t likely be of his buddies skinny-dipping in a jungle lagoon. Keeping such photographic service records was encouraged; beautiful albums were marketed during the war, the leather or cloth covers embossed with slogans and imagery from each branch of the service. Many men kept meticulous photographic records of places and events they’d never see again, so why not include that funny nude shot? It’s not like it meant anything; just grab-ass, just fucking around, the way young, high-spirited guys do when there are no women around to point, giggle or disapprove.

For those who’ve never gone to war—I among them—it’s hard to understand the unique bond that forms between those who’ve faced death, and saved lives, together. Psychology was first applied to the draft in World War II, with the intent that emotionally vulnerable candidates be weeded out. Although 12% of young men were rejected, most for perceived psychological weakness, there was a higher incidence of “neuropsychiatric” illness, as the military termed it, in the first half of World War II than in all of World War I.

In analyzing the data the shrinks discovered that some who appeared weak became strong in battle, while the tough broke down; the only factor that reliably limited psychological collapse under stress was a close bond between fighting men. Political ideology didn’t mean much on the front line, but a man would hold it together to protect the buddy beside him. In Wartime, author Paul Fussell quotes a soldier: “It took me darn near the whole war to figure what I was fighting for. … It was the other guys. Your outfit, the guys in your company, but especially your platoon. … When there might be 15 left out of 30 or more, you got an awful strong feeling about those 15 guys.”

Few said it more passionately than Marine Eugene Sledge in With The Old Breed, his diary of the battles for Peleliu and Okinawa in the Pacific: “Up there on the line, with nothing between us and the enemy but space (and precious little of that), we’d forged a bond that time would never erase. We were brothers. … Marine Corps training taught us to kill efficiently and to try to survive. But it also taught us loyalty to each other—and love.”

This profound intimacy cut through inhibitions. Sledge writes of men squatting together in mud-filled foxholes, shitting in ammo boxes because to even raise your head invited an enemy bullet. After that, is a man going to be shy about skinny-dipping? But when did they have a chance?

War, like filmmaking, is full of waiting. Men fight furiously for a day, a week, two weeks at most, and then pull back to recuperate and await new orders. This is when buddies, equal parts bored and grateful to be alive, took most of the photos in this book. Between battles they were able to bathe in makeshift showers and in rivers, lakes and streams; to swim; catch a few rays and just mess around like the kids they recently were. If someone had a camera they’d pose together, to remember their closeness, and if someone suggested they pose naked, well, that was just funny because they were guys and young and bursting with life, and eager to deny the closeness of death.

These lighthearted photos will undoubtedly offend some people, those steeped in the gospel of the “greatest generation.”

They won’t like their heroes so indisputably human, or the grim seriousness of war diminished by play, to which I can only quote naturist philosophy: Nudity is the great equalizer. As I sought to divide these photos by nationality I found it was hopeless unless uniforms, weapons or vehicles were included. English, Australian, Russian and American: all young soldiers, sailors, airmen and Marines look the same naked and grinning.
Compartir
share twitter