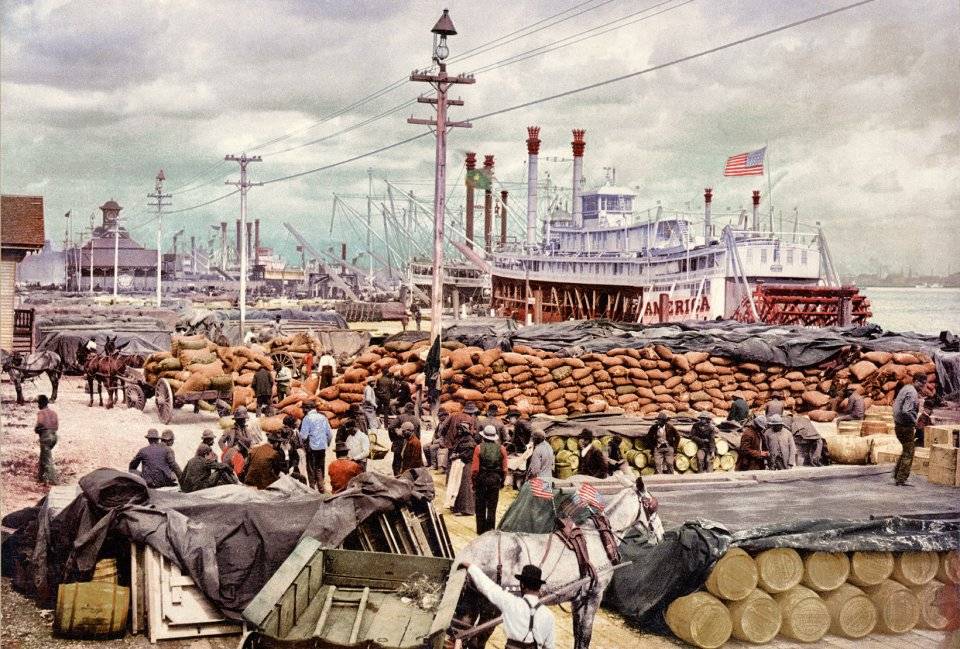 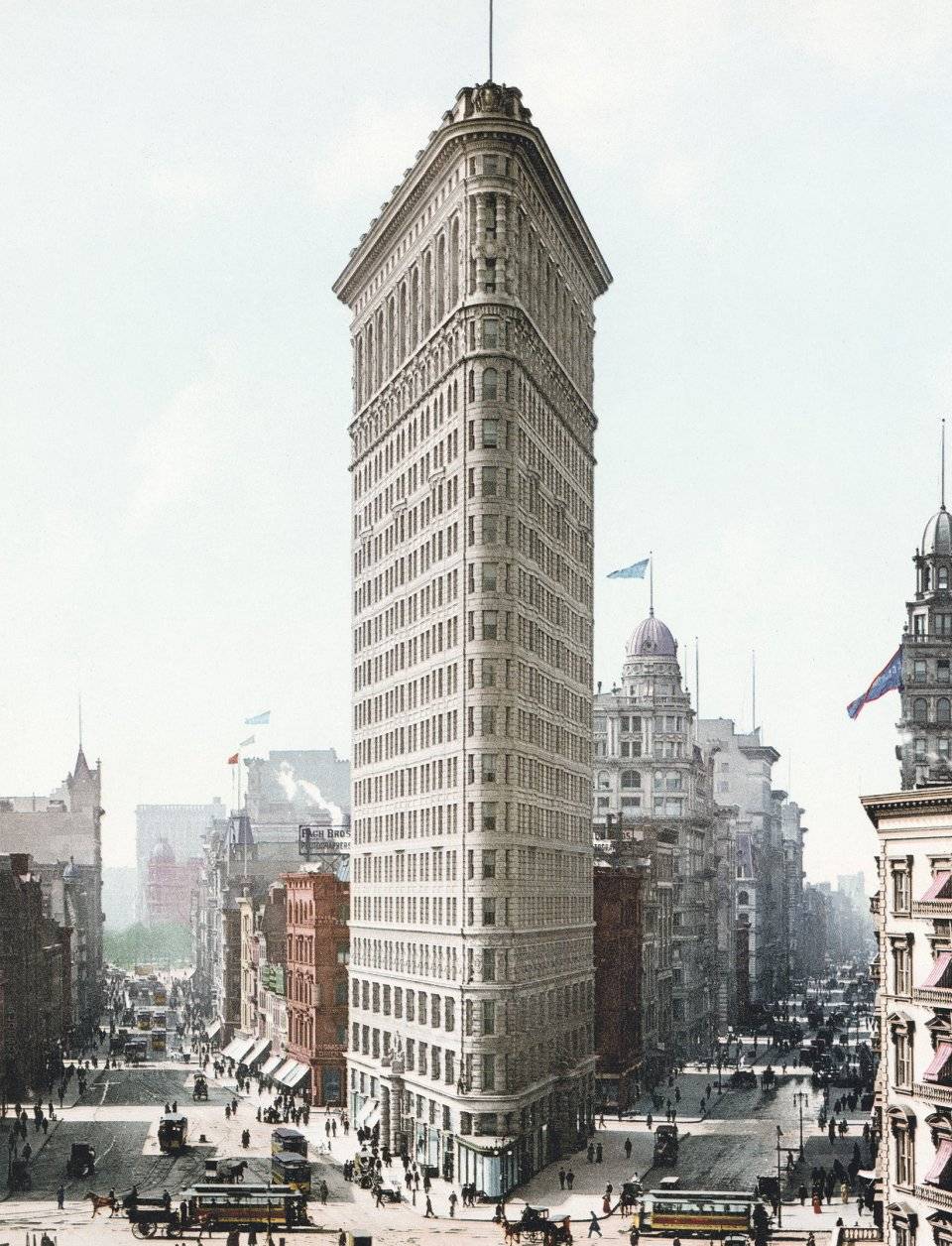 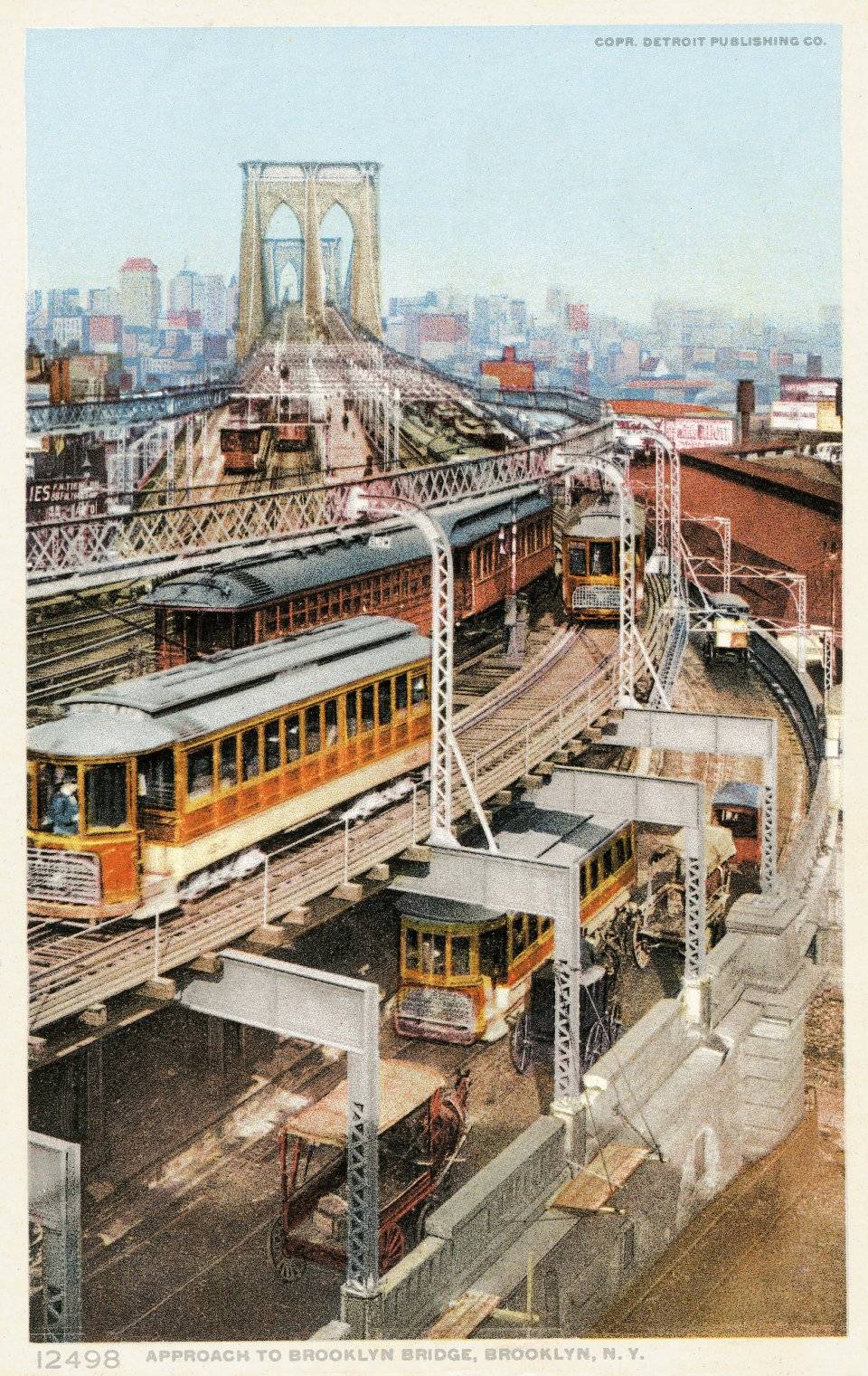 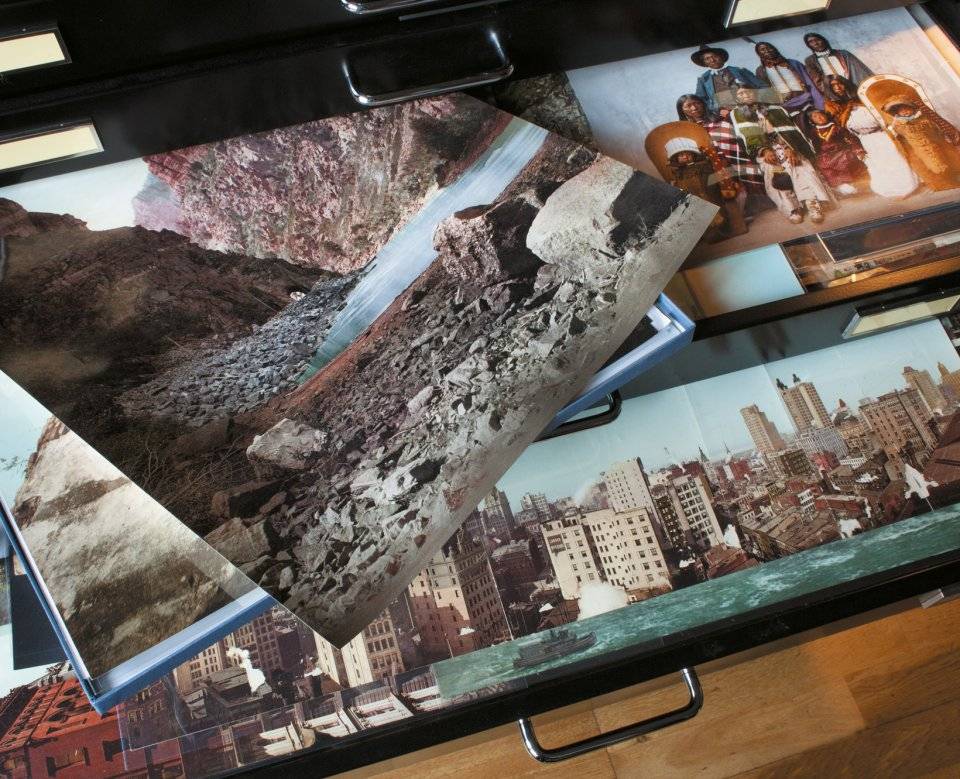 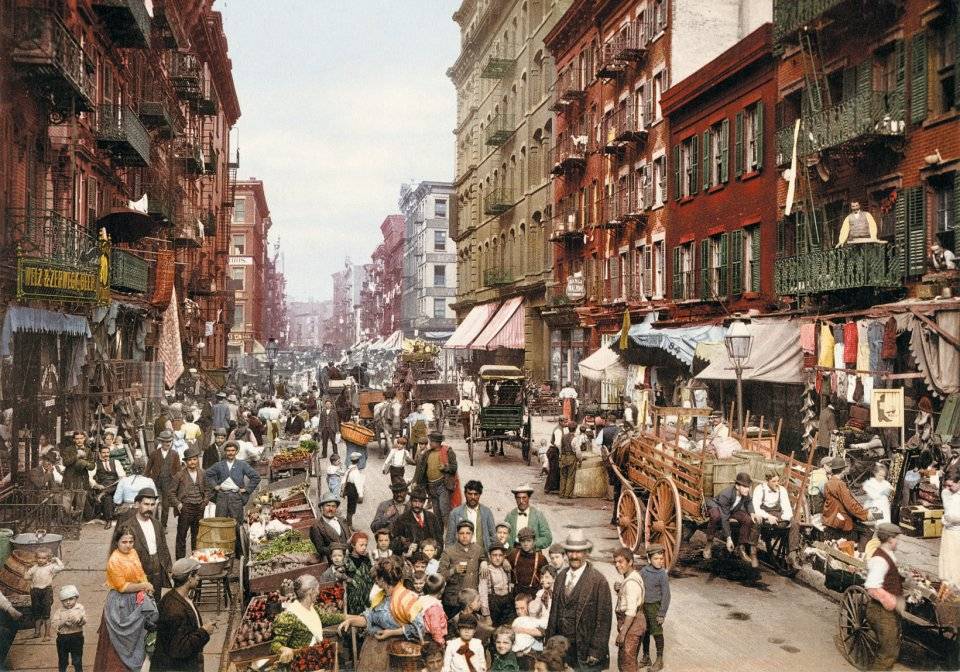 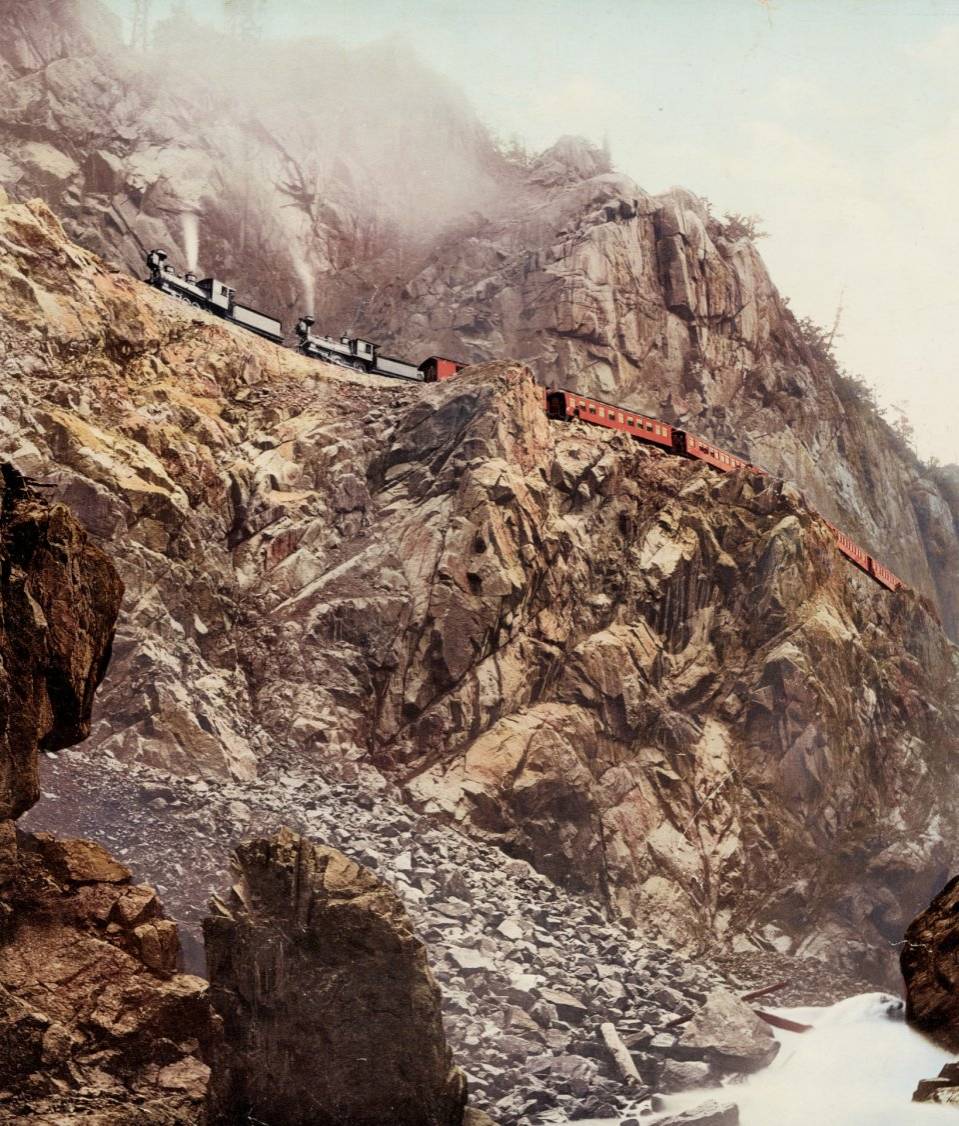 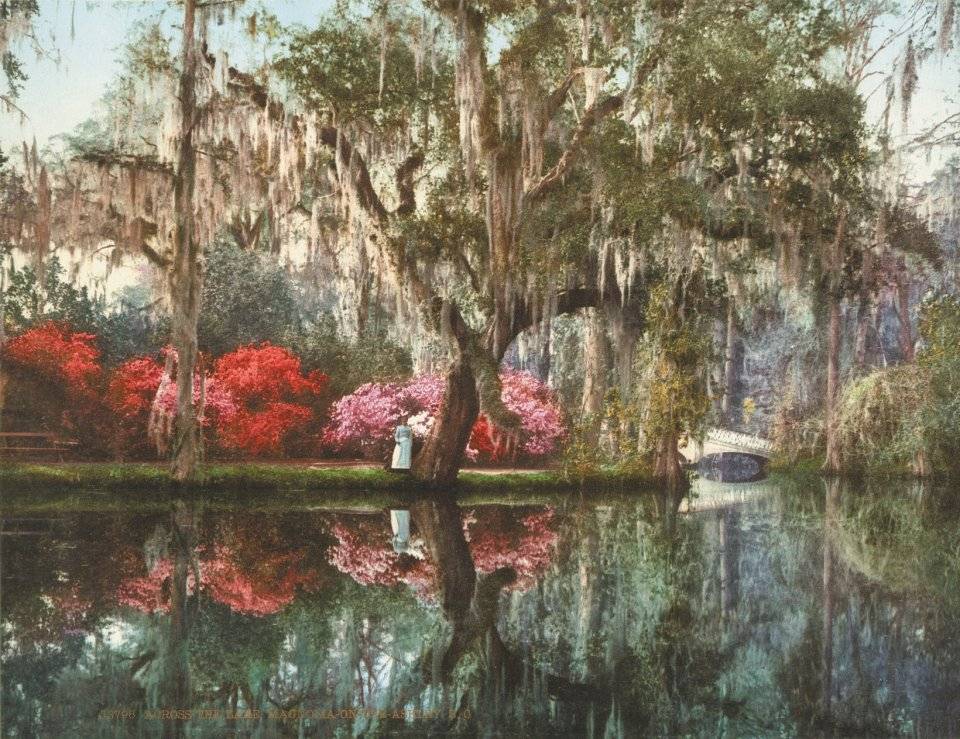 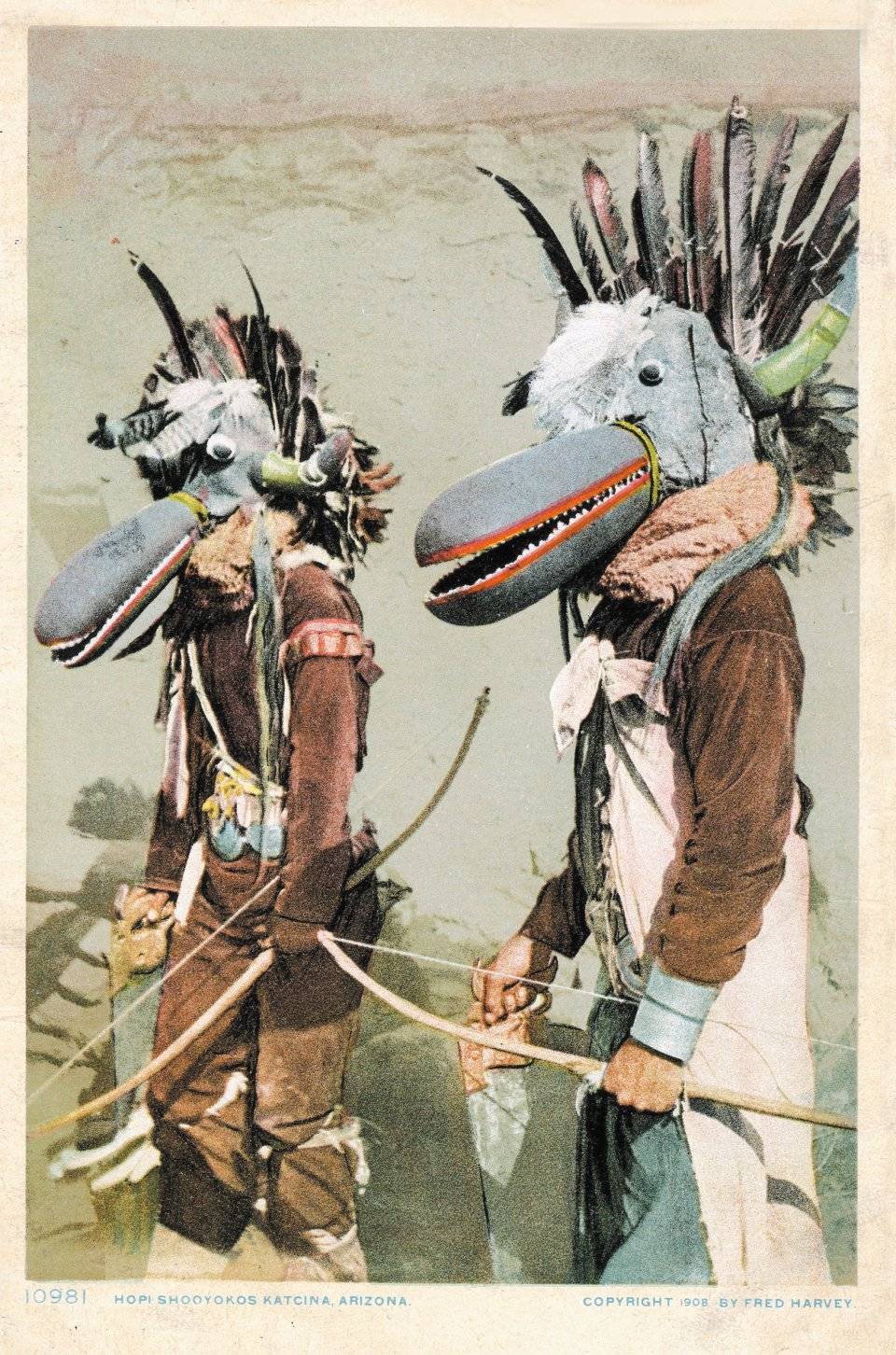 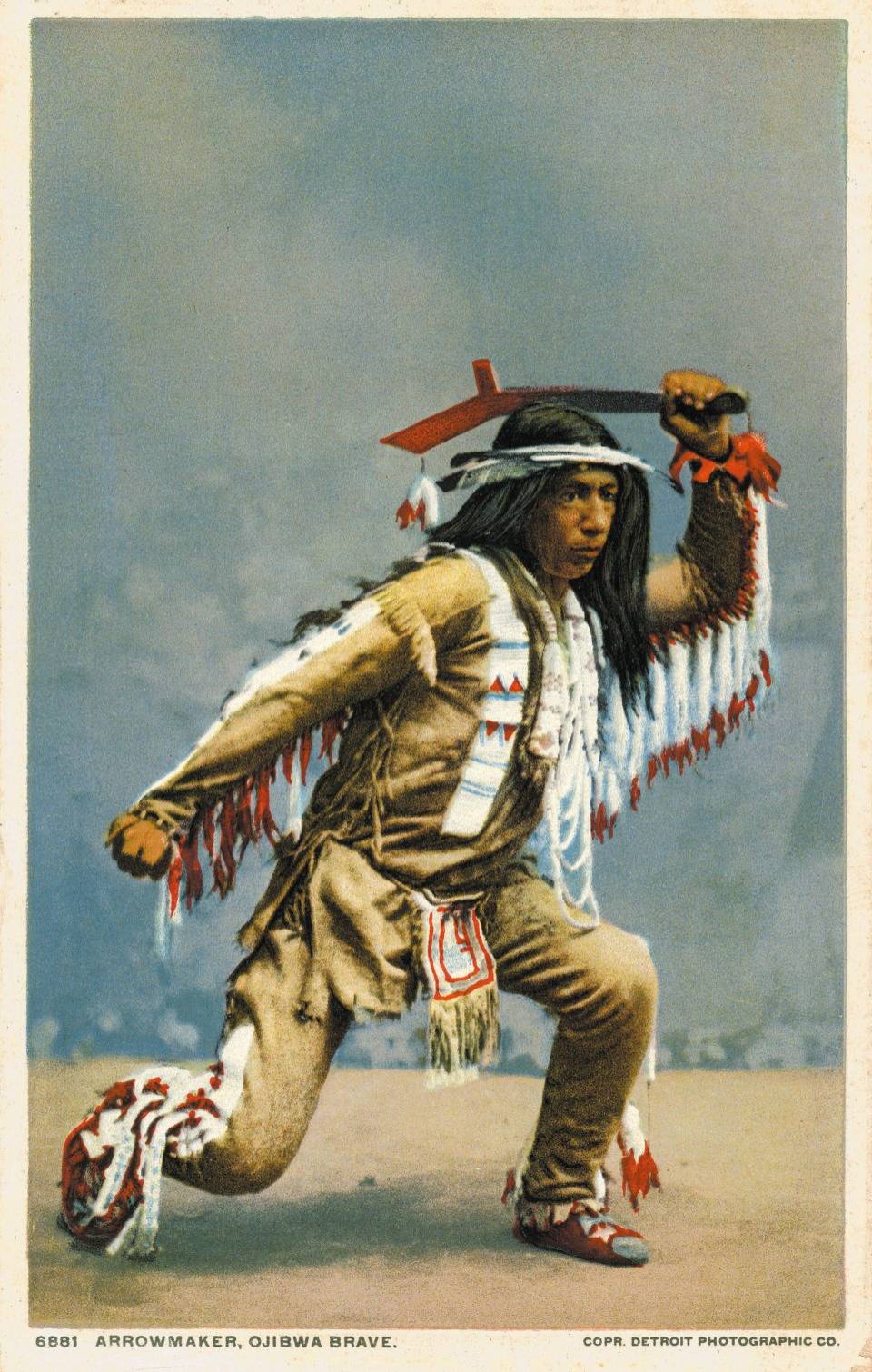 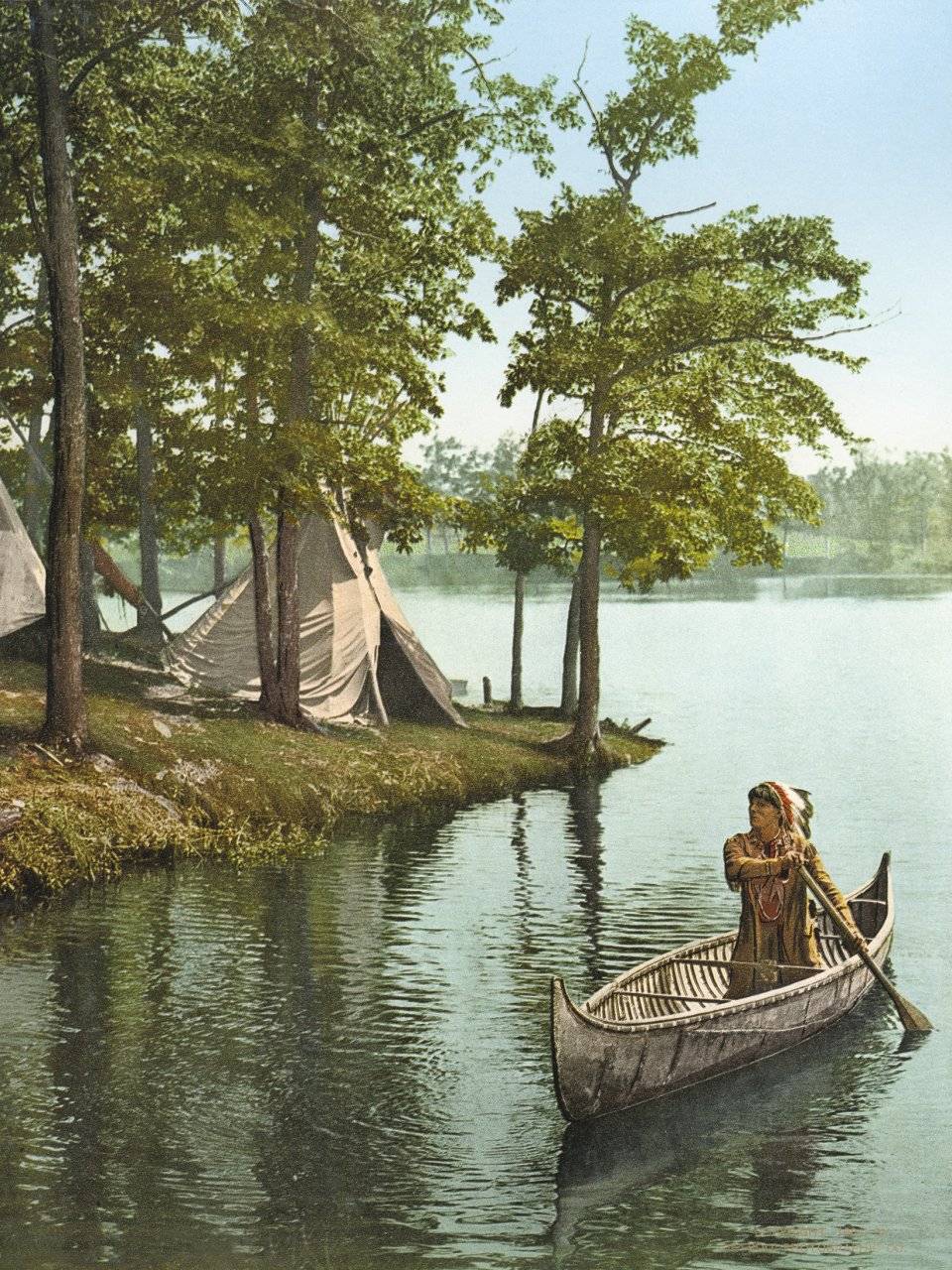 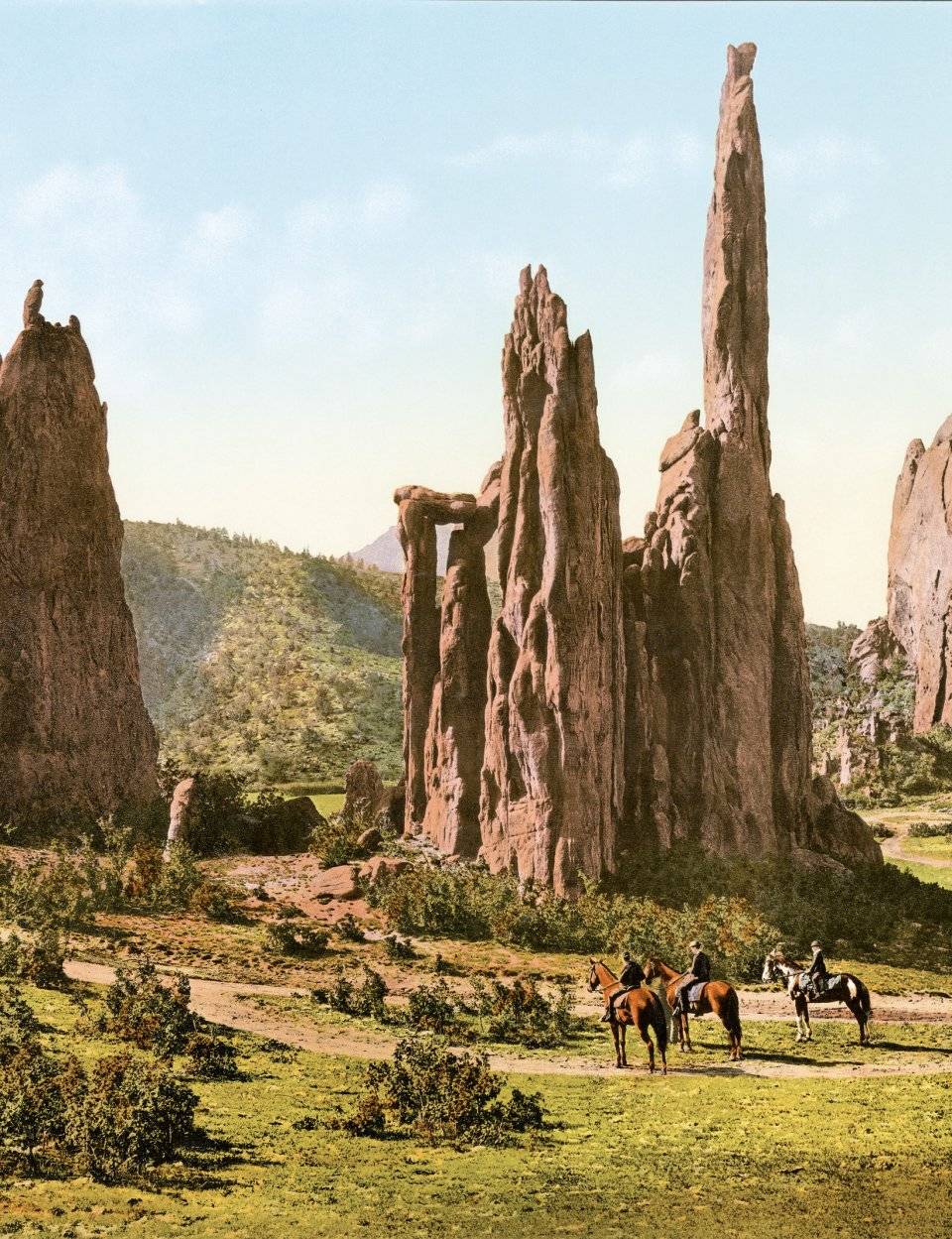 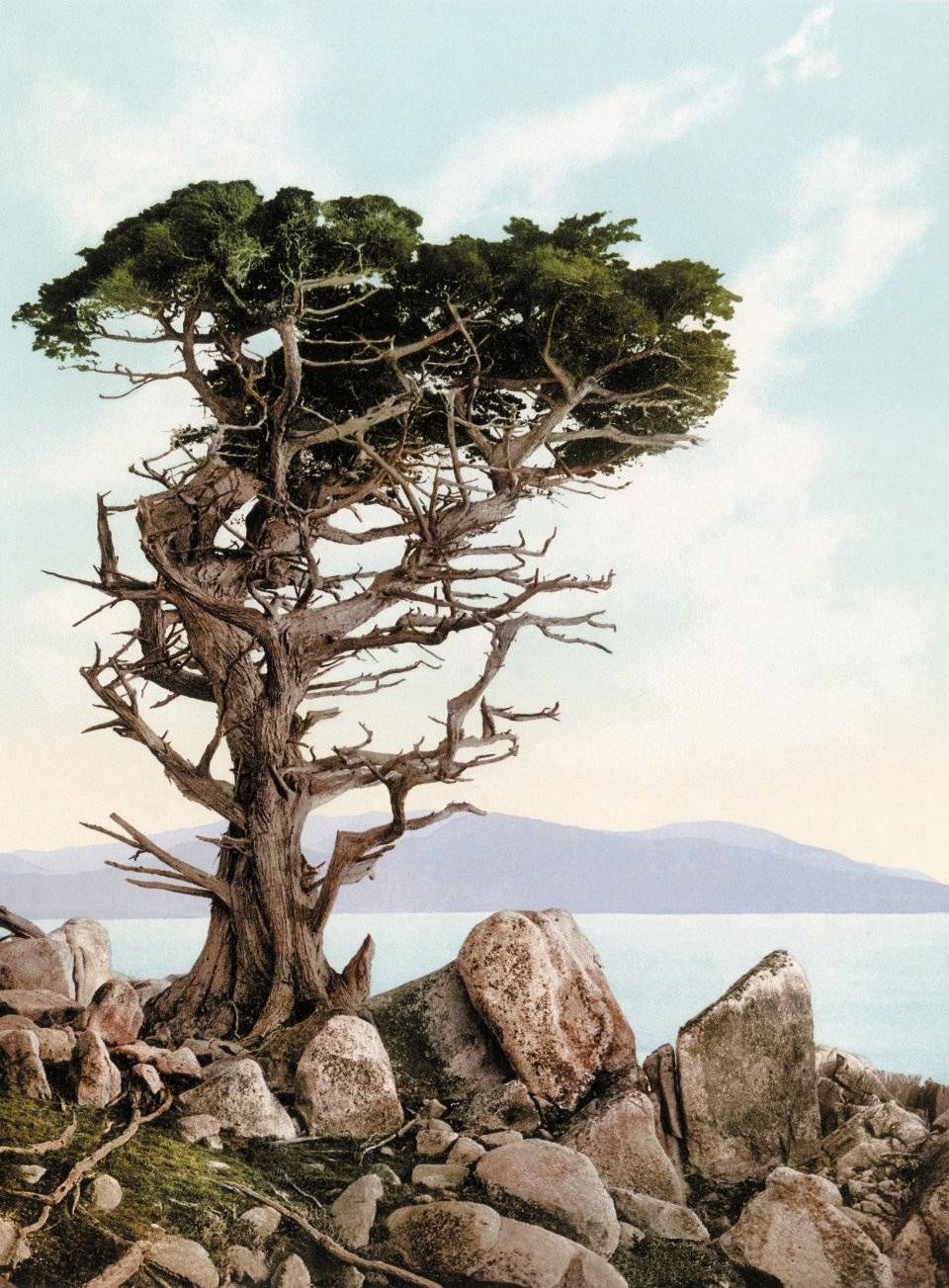 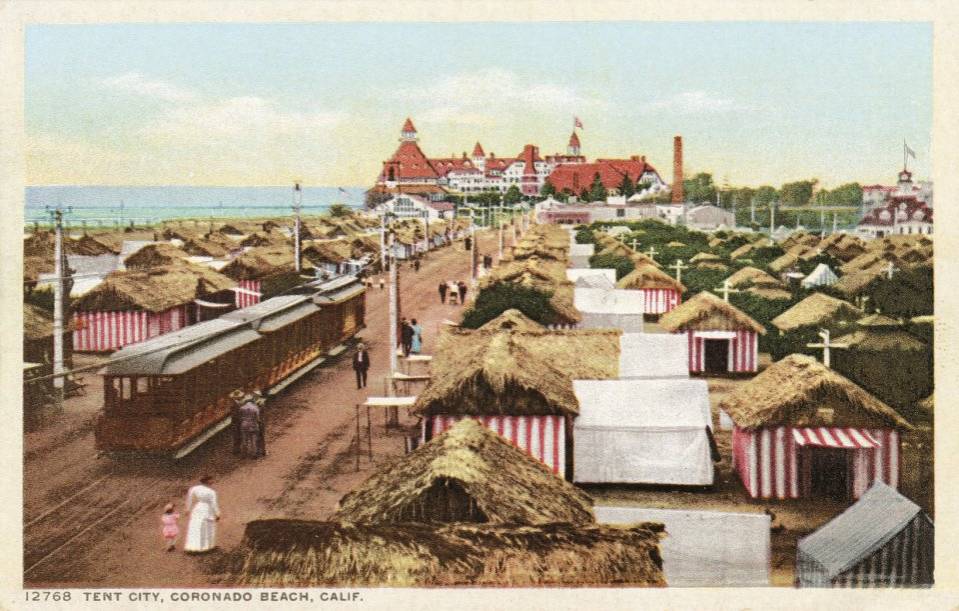 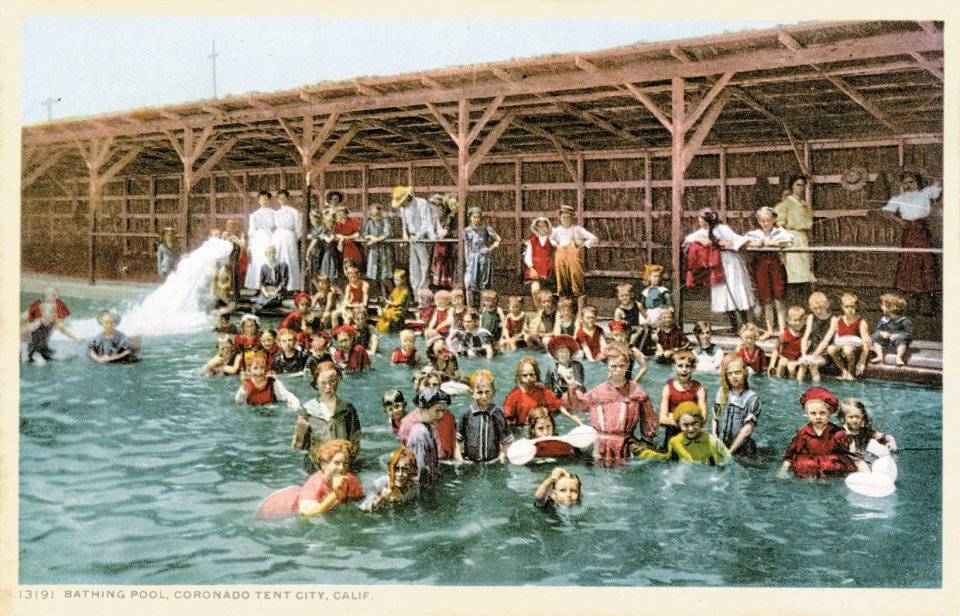 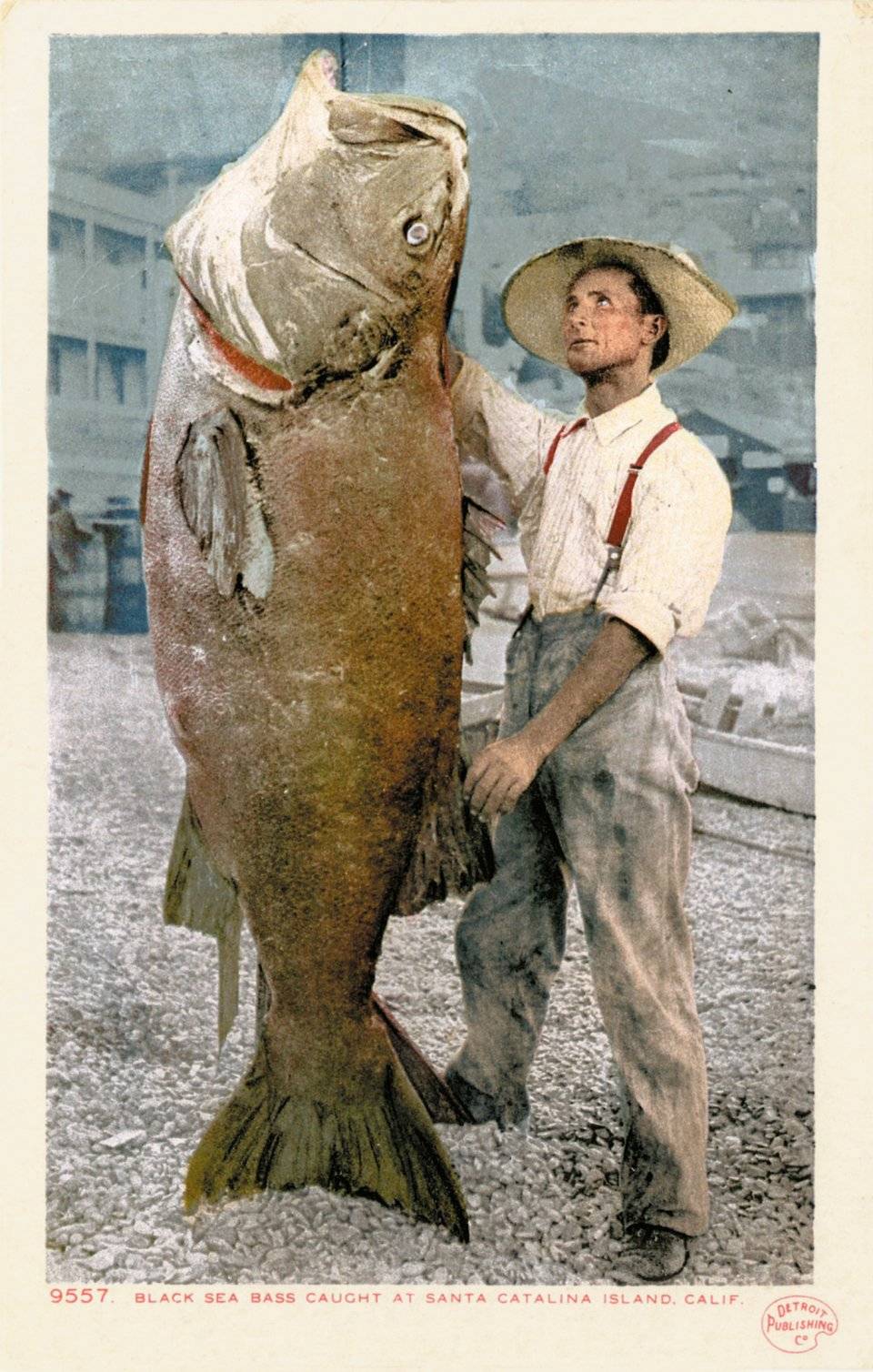 A treasure trove in color
The archive of the Detroit Photographic Co. (DPC) is probably the most important ever created on the subject of North America between 1888 and 1924: 100,000 subjects — landscapes, urban and rural scenes, ethnictypes, architecture, and many others—in the form of glass plates and black-and-white negatives. Several thousand of these were reproduced in color thanks to a new photolithographic technique pioneered in Switzerland, which entered use in 1895: the Photochrom process. These photochroms are the first color photographs of the North American continent.

To understand the astonishment generated at the time by this novelty, we have to step back around 100 years. The Grand Canyon, for example, had been discovered in the early 1850s and, by 1895, had already been photographed in monochrome during the scientific expeditions organized by the American government. But the Canyon’s rich tones — the reds, browns, ochers, and white of its strata burned by the sun — were unknown to all but a select few. These colors of what Henry Miller termed “the land of the Indian,” now so familiar to us from film, photography, and postcards reproduced in their thousands, were for the first time revealed to the world by these photochroms.

An expanding nation
The success of the DPC’s photographic adventure was much favored by the political context of a country at that time undergoing unprecedented economic development. At the end of the 19th century, the reconstruction campaign undertaken in the wake of the American Civil War (April 1865) had just come to a close. The “frontier” — the line separating the pioneer settlements from the vast wild areas — officially disappeared in 1890 and the Indians were consigned to reservations west of the Mississippi. As a result of the Spanish- American War (1898), the United States had extended its influence over Cuba (now a US protectorate), the Caribbean, and the Panama zone while maintaining a very “close” relationship with Mexico. Wholly devoted to business and trade, the industrialized regions, comprising above all the great metropolises of the East Coast (New York; Washington, D.C.; Boston; Philadelphia; and Baltimore) and the industrial capitals of the Great Lakes (Chicago, Cleveland, and Detroit), competed for power.

The Birth of the Detroit Photochrom Company
This energized, eager continent was the setting for the commercial adventure of the Detroit Photographic Co. (DPC). The DPC history is closely linked to that of a European company: Photochrom Co. of Zurich (PZ), later Photoglob Co., founded in 1889 to commercialize the photolithographic process that it had invented. The technique allowed mass production of color prints from a monochrome negative. Representing a perfect marriage between photography and lithography, it constituted, at the time, a veritable revolution. True, “photochromic reproductions” had existed since 1878 but the Photochrom process was alone in permitting mass production and the only one with potential for commercial exploitation, which was duly enacted on a grand scale. The directors opened independent branches across Europe and first and foremost in London in 1893. The success of Photochrom Co. Ltd., London, inspired the creation in 1895 of the Detroit Photochrom Co. In late 1897, Photoglob sent a team of photochrom technicians to Detroit, a factory was built, and a shop and exhibition space opened to display the company’s products. Moreover, the board of management did something very important: Engaged the services of one of the pioneers of American photography, William Henry Jackson.

William H. Jackson, pioneer
Jackson had inherited from his mother, a watercolorist, a taste for drawing and color and had begun painting on glass when he was very young. Once discharged from the American Civil War, he adopted an itinerant lifestyle, traveling everywhere with his sketchbook. From Chicago to St. Joseph, Missouri, he followed the advance of the railway, then set off up the Missouri River into Nebraska, in the company of herds of cattle and convoys of goods en route to the West.

He finally traveled as far as California, before returning to settle in Omaha, Nebraska, where, in 1868, he and his brother opened their first photographic studio, Jackson Brothers, Photographers. There, he began making portraits of Native Americans from the local reservations: Pawnees, Omahas, Osages, and others. Jackson made some portraits in his studio but also traveled to the reservations, his darkroom drawn behind him by his horse. Over the next 30 years, Jackson undertook journeys of exploration in the Rockies and Yellowstone on behalf of the United States Geological and Geographical Survey of the Territories. He also went on other missions throughout the world for the World’s Transportation Commission, producing reportages for Harper’s Weekly. The contract offered to Jackson by Husher included the purchase of his Denver studio and his entire stock of negatives—some 10,000 works covering not only the American West but more “exotic” destinations, such as India, Sri Lanka, China, and Indonesia. These came to constitute the most substantial archive of the DPC. Appointed director of production, Jackson learned the Photochrom process and helped tint his own pictures with the assistance of the watercolor sketches with which his notebooks were crammed.

The Conquest of the American Market
At the same time, DPC implemented a commercial strategy on a very large scale. In fact, over and above the production of photochroms, the directors of the DPC were set on realizing a major ambition: using the Photochrom process to print postcards and conquer the market opened up by the reduced cost of postal stamps. In late 1903, their first catalogue, titled Color Souvenir Post Cards, listed four series, including nearly 2,000 titles. Tourism was the stock in trade of the DPC; its directors understood this and sold their products from sales points located close to frequented sites.

Because it had remained unique, however, the photochrom remained the leading product. More than 1,600 “strictly American” subjects came into being between 1899 and 1905, ranging from the small and standard formats to panoramas and the “Mammoth” (approximately 42 × 52 cm /16 × 20 in.). These were available individually or in thematic souvenir albums. Clients were even able to obtain “made to order” items. Finally, in 1912, there appeared little thematic packs of 40 cards called “Little Phostint Journeys”, which could be projected onto a screen as large-scale, striking images to bring a destination to life.

The End of an era
During prosperous times, the DPC’s total production frequently attained seven million images a year. However, the DPC’s production began to decline in the 1910s with increasingly stiff competition and high costs of photochrom and Phostint production. World War I and the recession of 1920–22 were fatal for the company and in 1924, it went into receivership; Jackson was dismissed and the company’s 40,000 negatives were sold off. However, the DPC continued to sell off its stocks until 1932, when the company was liquidated.

In 1936, William Henry Jackson returned to Detroit to inquire after his negatives. They, and those of other photographers, along with the relevant prints, had initially been acquired by the Henry Ford Museum and Greenfield Village of Dearborn, Michigan, to form part of the collection of the Edison Institute and subsequently, in 1949, donated to the State Historical Society of Colorado. The Society kept those parts of the archives that related to territories on the west bank of the Mississippi and handed over the rest—some 25,000 glass negatives and 300 photochroms in addition to 900 glass plates by Jackson— to the Library of Congress in Washington, D.C., where they remain today.

Basement rediscovery
In Europe as in the United States, photochroms were long forgotten. Specialists of photography could not help but feel reservations about images whose colors seemed so artificial. It was only in 1974 that the curator of the Zurich Central Library, Bruno Weber, discovered the photochroms left to the Municipal Library by Photoglob in 1914. They were in the basement of his library, carefully stored in a cupboard that had not been opened since then. Smitten by the fresh colors and impressed by the technical quality of the Photochrom process, he organized an exhibition (1974–1975), and set about publicizing the procedure. At the same time, Marc Walter was continuing to expand his own collection of photochroms, which had been gradually evolving over more than 20 years.

And now, ninety years after the DPC fell into bankruptcy, the photochrom adventure continues with TASCHEN’s presentation of the Walter collection. From Native Americans to the last cowboys, through legendary locales such as Far West saloons and Atlantic City, this epic voyage through the America of the past is imbued with a sense of discovery, adventure and awe, of eyes first opened to the varied colors of a vast and awesome continent. 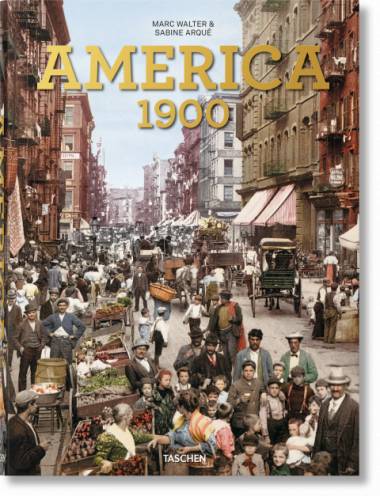