The Beauty of the Beasts

A new life-form in its own right? Lena Herzog captures the uncanny sculpture-creatures of Theo Jansen 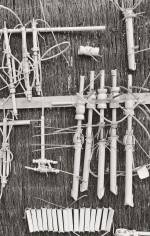 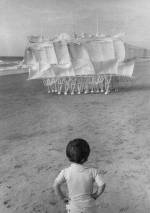 Theo Jansen adjusts one of the many joints connecting the plastic pipes of the Strandbeests.

I’ve come to think of Theo Jansen as a cross between Leonardo da Vinci and Don Quixote. Leonardo for the wide-ranging aspiration and sheer protean inventiveness of the whole enterprise—the avid facility at drawing, the leapfrogging scientific bent of mind. And Don Quixote for the sheer over the-top ambition and vision and knighterrant nobility of the project—for, if this wasn’t a case of dreaming the impossible dream, I don’t know what is.

He’s a fetching, immensely congenial fellow, a wry enthusiast, a tall clean gleam of a man and still quite youthful looking despite being over 65 years old. When I went over to Holland to meet him, we sat on a bench along the wind-swept promenade overlooking -Scheveningen beach, on the northwest cusp of The Hague. Down below, bulldozers raked the sand, combing the dunes back into acceptable shape after a spate of recent autumn squalls, as winter clouds went whipping by above.

Jansen pointed south toward the somewhat more remote stretch of beach where he puts his steadily evolving plastic-pipe beasts through their paces each summer, and then just up north to where, as it happened, he himself had been born, in 1948, the youngest of 11 children. His earliest memories include the way his father and older siblings would all set off for various jobs each morning, and how he used to love fashioning lenses out of clock faces and other stray panes and then playing with light refractions on the ceiling while lolling in the bathtub. At school, he was good in geometry, but was especially entranced by the prospect of flight, and hoped one day to be a pilot.

He proved a somewhat lackadaisical student at the University of Delft, where he majored in physics while immersing himself primarily in “hippie-type” extracurricular activities, such as music-making. Even his conventional studies were less than wholly conventional: assigned to study the electrical conductivity of copper, he instead documented the feedback loops of sound provoked by tapping copper pipes, instances of the then nascent (and still decidedly suspect) chaos theory. “They didn’t know quite what to make of me, nor I of them: I was being trained to be an engineer,” he says, “but the longer I studied, the less I could see myself working as a robot for Philips Electronics, or some such.”

He left school after seven years, married though without a degree, and held a series of odd jobs, including as an assistant with the medical faculty of the University of Rotterdam. But when that first marriage dissolved in 1975, he decided to give himself over completely to art.

A series of his landscape paintings enjoyed a certain success, but his heart was still in the clouds. In 1980, tinkering away, he fashioned a lightweight lens-shaped heliumfilled free-floating UFO that was 15 feet in diameter, complete with dangling spookysound emitter, which he and a group of friends went on to launch into the skies over Delft one blustery afternoon, provoking an immensely satisfying War of the Worlds–like panic stricken response among the population at large, the police careering in hot pursuit. After that (and the brief rush of notoriety that ensued), he was ruined for any conventional painterly practice.

The following year he invented a painting machine—a sort of mammoth wallsized ink-jet printer, only it was paint-jet and what it printed onto the wall in question was a life-size version of whatever three-dimensional object one put in front of it. Within a few years of that, he’d had his vision of the Strandbeests, lumbering away down the beach, saving the world.

The idea hadn’t just risen out of nowhere. Jansen had been thinking about virtual life-forms of one sort or another for several years already, ever since reading the English evolutionary biologist Richard Dawkins’s 1986 bestseller, The Blind Watchmaker. “That book had an enormous impact on me.”

He decided to concoct a walking algorithm; he’d long been interested in walking, which is to say, continually stumbling forward in such a way that one catches oneself before tumbling completely. “In its essence,” Jansen elaborated, “walking is simply constantly changing your shape in such a way that you move forward.”

Jansen set himself the arbitrary (though to him quite obvious and incontrovertible) rule that he would not deploy any technology beyond PVC or rubber tubing: no electronic timers or counters or crankshafts—his was a sensibility pitched to a preference for the resolutely analog in the face of the ever more digital.

The calibrations and recalibrations took years, across generation after generation of new Beest-types and fresh experiments out on the beach. The effect is entirely uncanny—or perhaps just the opposite: canny as they come. There is nothing whatsoever icky about the Strandbeest in its resolute advance: in fact, on the contrary, it is almost a pure expression of awwwww. It is cute, adorable, and it veritably commands the admiration and affection it seems to call out for. Watching the striding Strandbeests, we can’t help ourselves: our hearts become lodged in our mouths. But does that say something about them, or about us?

“Oh,” Jansen responds, without a moment’s hesitation. “It is obviously them: they are very much alive.”