“Ever since I had first started as a photographer in the 1960s, I had worshipped photos of New York and had been inspired by the city’s great photographers, like Irving Penn and Richard Avedon. It was a thrill to be there, to see the city as they did.”

John and Yoko recording at The Hit Factory.

John and Yoko recording at The Hit Factory with their son Sean. It was the first time either of them had recorded since Sean’s birth.

“At the time I had never imagined that John would die so soon. That made these photos very precious to me.” 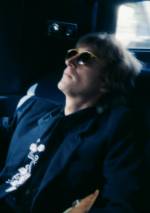 Kishin Shinoyama is one of Japan’s premiere art photographers. Awarded the country’s prestigious “Most Promising Young Photographer” prize in 1966, when he was 26 years old, Shinoyama has since released an astonishing number of photo books and monographs, most featuring his signature imagery of nude (or partially nude) women and men. Lyrical and sensual, Shinoyama’s provocative images have been hailed by critics and have come under fire for indecency, making him one of Japan’s most controversial and acclaimed artists.

With much of his photography featuring celebrities and pop stars, Shinoyama displays a remarkable ease with his subjects. His work captures rare, private moments with very public personalities, subjects often revealing, through his lens, an unexpected openness and vulnerability. His capacity for intimacy, even when photographing the well known and oft-photographed, lends his images the air of a family snapshot, personal moments captured without staging or selfconsciousness.

This candidness is perhaps most poignantly expressed in his beautiful series of photographs of Yoko Ono and John Lennon, shot at Ono’s request for the LP cover and promotion of the couple’s celebrated 1980 album, Double Fantasy. Now, over 30 years later, these images (many of them never before published) still resonate with a remarkable freshness and honesty. Shinoyama successfully captures the iconic couple at a pivotal moment in their long-standing relationship, a time of intense creative catharsis and personal rebirth.

JD: How did you two meet, Mr. Shinoyama and Ms. Ono?
KS: Forty years ago, in 1974, I came to New York City to take a photo of Yoko at the Dakota for a Japanese magazine, Asahi Graph. That was the first time I met her. She really loved the picture I took and remembered me.

YO: I recommended you, Mr. Shinoyama, as a photo artist, didn’t I? KS: That’s right. They wanted a Japanese photographer to do the album cover for Double Fantasy, so I got an offer on the phone.

JD: Tell us about the book you have published with Yoko so many years after the pictures were taken.
KS: It was just a two-day photo shoot and probably took seven or eight hours altogether. I took around 800 photos. Now, 30 years later, Yoko said, “Why don’t we publish these in a photo book?” The public has seen a few of the photos, but it’s the first time anyone has seen so many. When I saw them all together in layout, even I thought, “Wow, great expression! Wonderful!”

YO: Let me tell you a funny story. When I had my 80th birthday, I thought you might be coming soon so I turned down being photographed by all other photographers and just waited for you!

JD: When you take a photo, do you have a moment where you feel like “this is it”? Or is every moment important to you?
KS: Well, it’s not like there’s any special way I try to photograph a certain situation. I share time with people, we build up intensity, and I am able to get some good pictures.

JD: I know you have published many books. Do you think that publishing a photo book is kind of putting an end to that time?
KS: You could say so. I think that photography should capture a moment at the end of every second, so to speak. Every moment ends instantly, it becomes the past, you know? Photography is one of the tools you can use to record a moment. For any type of work, I’ve never changed my approach. I take photos of everything I see, without letting anything pass by. At the time, I had never imagined that John would die so soon. But that makes these photos precious ones.

JD: Do you remember your first impression of John?
KS: John was a big star. Everyone in the world knows John Lennon of the Beatles. He was really focusing on his music. I was so nervous to meet him, but he was so nice. How do you say it in English? Tender? He was such a sweetheart.

JD: Were you more nervous than usual during the session?
KS: Well, I was nervous, but only at the beginning. After that, I was working as I normally do. I tried to record every moment of what I saw.

JD: As I look at the photos, I really feel John and Yoko have a sense of intimacy around you. How did you get to be so close to them in such a short time?
KS: John and Yoko were doing creative work, working on recording the album together after a long time away from making music. They had been raising their son Sean, loving each other and living their happy life together. I believe that I took these photos at their happiest moment. I’m very glad that I was there to take the photos. It is not a matter of technique, only that I was so fortunate to be a witness at the best time in their lives.

YO: You see, this is going to go to the whole world. And everybody loves John, and the book is something that everybody will love. Reviewing the pictures for the first time in 30 years, you can probably look at them more objectively than when you first took them. What kind of effect do these photos have on you now?

KS: I am really amazed. I really feel my avidity, my hunger, in these photos I made. That I, as a photographer, tried to pour all my energy into capturing the moments as they happened. There wasn’t a lot of action at the recording studio: Sean came in, Yoko was lying down, John was singing, and so on. The photos reveal how I felt. They show that I didn’t want to waste a second. I would say I did well…I did a great job.