How the TV series became a 21st-century addiction

Tilted headgear and explosive mixtures: Sulfuric acid is put to gruesome use in Breaking Bad.

An exquisite corpse and icon of television history: Sheryl Lee as Laura Palmer in Twin Peaks. 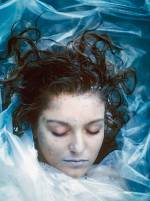 Sad suburban Grace Kelly lookalike: In Mad Men, there is only so long Betty (January Jones) can put up with her husband Don Draper (Jon Hamm). 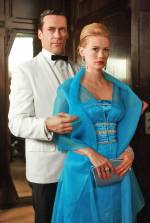 Come to bed eyes: In Two and a Half Men, Missi (Miley Cyrus) puts Walden (Ashton Kutcher) in a difficult situation: she is an old friend’s daughter—and pretty seductive to boot.

Supermarket adventure: George (Ted Danson) and Jonathan (Jason Schwartzman) on a race against time mission in Bored to Death.

26 seasons and counting: The Simpsons is a family series in both senses of the phrase.

The most powerful man: In House of Cards, all political reins converge in the hands of Frank Underwood (Kevin Spacey). 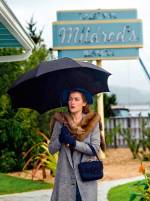 Welcome to the Family

By Jürgen Müller and Steffen Haubner

An unidentified horror has drained the world of its color. The air seems charged with electricity, as if a heavy storm is coming. Leaden water trickles from a hose, and sirens sound in the distance. Wind chimes bear witness to happier times when the family gathered around the now deserted swimming pool. What was once familiar has turned into its opposite: a conspiracy of objects against the tyranny of their owners. A snail crawls over a gray stone wall, carrying its own fortress on its back. Its antennae feel their way in the reverberating silence. A cuddly toy floats up to the surface of the water: a lurid pink bear with only one eye. The other eye is sucked relentlessly toward the filter system, disappearing into the vortex.

The opening sequence of Breaking Bad’s second season shows neither people nor plot that make any sense. Instead, we are presented with puzzling images. What kind of disaster has taken place? We only discover what the scene is all about in the final episode a device that turns the entire season into a single flashback, or an opening sequence that lasts for several hours, like a monstrous overture to the season ahead. Writer Vince Gilligan can, however, rely on an audience that has learned to cope with such demands. A series thrives on the expectations of the viewer. If these are put to the test, we can tell whether a production is exceptional and not just run-of-the- mill.

For a long time, sticking to accepted narrative models and playing around with recognizable elements was a guarantee of success. Today, TV professionals of Gilligan’s caliber have created an audience that positively demands that its hunches and predictions are swept aside by the whirlwind of events from one episode to the next, season after season.

If viewers expect anything, it is the unpredictable.

Producing artistic allegorical images used to be the prerogative of ambitious motion pictures. Now television series are the ones highlighting the enigmatic nature of shots, rather than merely using them as the means to convey a linear plot. Approaching visual language in this way is remarkable. It transfers sovereignty over interpretation to the fan base, more in the style of a rock ’n’ roll lyricist whose only concern is that he might be accused of boring his audience with crude messages. Modern TV series like Breaking Bad (2008–13) and Lost (2004–10) are presented as veritable mazes crammed full of references, challenging viewers to make analogies and deduce conspiracy theories. Their aim is to be as unfathomable as life itself.

Breaking Bad has succeeded in showing us real-life morality as a gray area, rather than an ethical imperative. As the viewer warms to the main characters with each episode and understands their motives, he takes a step closer to evil. He does not perceive their actions as being wrong, but instead gains an insight into their world and the decisions associated with it. Morality should in no way be understood as a problem of absolute categories when conducting our everyday lives, but as a process of constant weighing. Who has earned my loyalty? Everyone, or just a handful of people? As viewers, we are invited to adopt the protagonists’ internal viewpoint, but not to identify with them. As is the case with many current series, the ambitious viewer is offered complex underlying levels of meaning that can be discovered only through repeat viewing of individual episodes. Even then, however, we are expected to accept riddles that remain unsolved. The series imitates life insofar as some things are often left unsaid or not understood. The fact that such complex questions arise in the context of a TV series is part and parcel of the new “quality series” phenomenon. There has been much analysis and discussion about the prerequisites for this development (in terms of technology and media policy), a trend which was set in motion by networks like HBO and AMC and which has since produced dozens of high-quality TV series, also known as “auteur series,” to borrow the genre term from cinema. If there is one common denominator in all these analyses, it is the consensus that contemporary TV shows bear very little resemblance to series in the past with their often one-dimensional content. This break with the staid television entertainment of previous years occurred even before the advent of new technology like DVDs and the Internet. It actually began back in the 1980s in series like Hill Street Blues (1981–87) and St. Elsewhere (1982–88), which were more open to socially critical issues.

A closer look at the long-term evolution also reveals a surprising continuity in the theme of the family. Hearing the phrase “family series,” we immediately think of a particular type of TV series. The plot is designed in such a way that a whole family— that is, every age group—can identify with it and be interested in the themes. Series like Little House on the Prairie (1974–83) present us with ideal families that defend individual members against a hostile outside world. The narrative structure is also perfectly aligned with the notion of a sound social community. External threats are eliminated through inner strength and family cohesion. Each viewer can find a suitable family member with whom to identify among the protagonists. Today’s producers, however, no longer have any homogeneous and predictable audience at their disposal. They are faced with a highly diverse mix of viewers who reflect on the content at totally different levels. The makers of new series are successful precisely because they address this heterogeneity in their subject matter. Viewers are still offered a character with whom they can identify, albeit in a far more extreme form than was the case in old-style series. The badly behaved, misunderstood son might well identify with Tony Soprano’s foot soldier Christopher, or even secretly with the chubby loser, A. J. Mothers recognize themselves in the overprotective Carmella; in her desperate attempt to drill some decency and culture into the family, she acts with the same level of squeamishness as her husband in disposing of his enemies.

The nuclear family that was once the main focus has given way to endless new configurations of characters in which the audience, and indeed society as a whole, can see itself mirrored. This is what gives the new quality series its integrative power. In other words, the family is still there, only these days we experience it in a far wider range of forms, and these in turn are subject to constant metamorphosis.

Many plots of series both past and present draw their dramatic potential from the tension between the interests of the family on the one hand and the context of society on the other. It is, however, still all about the external challenges and internal conflicts of a familylike community, and in this sense the new “quality” series are actually quite traditional. The existential questions remain the same: Who shoulders the responsibility? Who feels bound to whom, and why? What ensures social cohesion? How do they deal with external threats? What are the community’s aims? What is home(land)?

The TV series is the ideal medium for visualizing the social fabric as it teeters on the edge. For, unlike the individualism and subjective perspective of cinema, the series always refers to both an infinite past and an endless future. The cohesive power of the family and the collective resides in the fact that the individual is always just a temporary manifestation of a continuous line of ancestors and successors. In this sense, the content matches the form perfectly, as every episode is always just a static point in a potentially endless series of scenes that is never allowed to end.
Compartir
share twitter
Once upon a time in America
Sculptural species
Once upon a time in America
Sculptural species