Before Easter After Launch at the Morgan Library 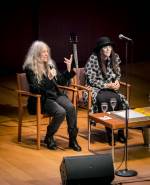 On Thursday, October 24, Lynn Goldsmith and Patti Smith celebrated the release of Before Easter After at the Morgan Library and Museum in New York.

Some 175 guests attended the private event, which included a conversation between Smith and Goldsmith moderated by the book’s editor Reuel Golden, as well as a special performance by Smith, her daughter Jesse Paris Smith and Lenny Kaye of the Patti Smith Band.

Goldsmith and Smith entertained the hometown crowd with great stories, good humor, and moving memories from the making of the book.

Signed by both artists and limited to a total of 1,500 copies, Before Easter After documents a transformative moment in Patti’s career and celebrates two greats whose creative partnership continues to this day. Available in a signed Collector’s Edition and two Art Editions, each with a signed print.
Compartir
share twitter

Before Easter After on CBS