“One might call the ingressi Milan’s best-kept secret, the architectural equivalent of Poe’s purloined letter: a secret that is “prominently hidden” for all to see, and for a more restricted number to enter. With the ingressi, in fact, we are dealing with spaces that, by a peculiar logic of representation, start as passages to a given place but end up becoming their own destinations.” - Daniel Sherer

TASCHEN is pleased to announce the opening of Ingressi di Milano, a new exhibition of photographs curated by Karl Kolbitz. The show is presented in parallel with the release of Kolbitz’s eponymous TASCHEN publication, an unprecedented look at Milan’s design DNA. Over the course of countless trips to Milan, Kolbitz’s exploration of the city’s eclectic aesthetics triggered the following, paradoxical question: in a city famous the world over as an exporter of design, how has its multitude of exuberant entryways remained so inconspicuous? In his book, Kolbitz opens the doors to these remarkable Milanese spaces, leading us through 144 of the city’s most sumptuous entrance halls dating from 1920 to 1970. At the intersection of art, architecture, and design, the collection showcases the work of some of the city’s most illustrious architects and designers, including Giovanni Muzio, Gio Ponti, Piero Portaluppi, and Luigi Caccia Dominioni, as well as non-pedigreed architecture of equal impact and interest.

The photographs selected for the Ingressi di Milano exhibition offer an enriching overview of this exciting publication and its new line of inquiry in Milanese modernism. Each of the featured photographers – Matthew Billings, Paola Pansini, and Delfino Sisto Legnani – capture the entryways with individual sensibility, while combining a stylistic interplay of details – such as stones, stairways, and doors – with larger architectural views. Until now hidden away behind façades, these mediating spaces between public and private prove dazzling examples of modernist color and form, from juxtaposed stones to minimalist murals. The Ingressi di Milano book and exhibition will be featured on TASCHEN’s website, as well as on Facebook, Instagram, and Twitter via the hashtag #Ingressidimilano.

See all prints on display

The editor:
Karl Kolbitz is an editor based in Berlin. Growing up in the reunited German capital, he became interested in architecture and how the built environment shapes our lives. He worked with Mario Testino and Wolfgang Tillmans for many years before founding his own creative practice, which focuses on the development and design of art and architecture publications.

The photographers:
Matthew Billings is a Berlin-based photographer and video artist whose work considers the intersection of moving and still imagery and the formal shifts brought about by technological advance. His work has been featured in magazines including Basso, Butt, and Paper.

Paola Pansini lives and works in Milan. Her photography focuses on still life and interiors and has been featured by some of the most prestigious fashion houses, international magazines, and architecture studios, including Armani, Prada, Valentino, Wallpaper*, Esquire, and David Chipperfield Architects.

Delfino Sisto Legnani lives and works in Milan. His photography has been featured in a number of international magazines as well as in leading culture forums like the Victoria and Albert Museum in London, La Triennale in Milan, and the Venice Biennale of Architecture in 2012 and 2014.
Paola Pansini: piazza VI Febbraio 10
Renato Ferrari, 1934–36 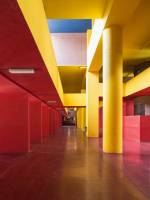