The artist as God 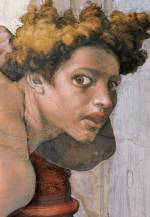 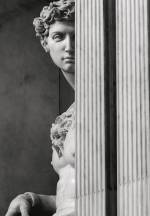 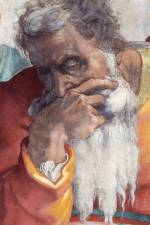 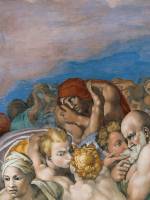 When, in his epic poem Orlando furioso, published in 1532, Ludovico Ariosto described his contemporary Michelangelo Buonarroti as il divino, “the divine one”, he thereby turned on its head the familiar comparison between God and an artist. For if the Middle Ages had likened God to an artist as a means of illustrating the creative power of the Almighty, the artist and his own powers of invention were now being compared with God. While the painters and sculptors of the Quattrocento were happy to view themselves as the representatives of divine forces, Michelangelo was the first to become the perfect embodiment of the idea of the artist as God. This simultaneously marked another paradigm shift: whereas the artists of the 15th century determined their position in society, their greatness and their rank by comparing themselves to the artists of antiquity and to contemporary men of letters, from the middle of the 16th century onwards Michelangelo served as the only yardstick.

Michelangelo was able, like no other artist before him, to liberate himself from tradition and contractual constraints and to follow his own creative impulses

Michelangelo achieved this status through his creation of outstanding works of art that not infrequently surpassed the normal bounds of individual ability. At the same time, he also demonstrated an unusual versatility not only in sculpture and painting but also in architecture. He even managed to earn himself a good press during his lifetime, in the form of the Life written by his pupil and friend Ascanio Condivi (c. 1525–1574), for example, which can be read for the large part as Michelangelo’s autobiography. Crowning these biographical writings is the Life of Michelangelo by Giorgio Vasari (1511–1574), who makes the artist the end and the climax of the history of art. The idea of the uniqueness of Michelangelo and his work remains valid in essence even today. Although more recent authors also recognize the shadow side of his genius, namely his abrupt manner of dealing with his contemporaries, his tightfistedness, his outbursts of anger and his often unjustified tendency to complain, his monumental oeuvre repeatedly inspires astonishment from almost every point of view. In truth, Michelangelo was able, like no other artist before him, to liberate himself from tradition and contractual constraints and to follow his own creative impulses. He embodied the perfect artist of the modern era, one who brought virtually every facet of his personality to his work and thereby replaced the medieval artist who simply produced to order. In assisting in the emergence of a modern breed of artist resolved to express only himself, Michelangelo thereby completed a process of emancipation initiated by the artists of the late Middle Ages.

Michelangelo’s talent and powers of invention are naturally founded not simply on his personality alone. The artist, who was born in 1475 not far from Arezzo and who died in Rome in 1564, grew up within a force field of fertile social, political and personal tensions. He was a member of a venerable Florentine family which, although part of the nobility, lacked the economic means and political influence this normally implied. As an artist he also fell into the category of craftsman, with its comparatively low social status. Through his voluntary membership of a profession still defined as working-class he thus occupied an unusual position within the upper echelons of society, and as an aristocrat amongst artisans the role of outsider. He felt truly close only to his family, in particular his father, brothers, nephews and nieces, to whose financial security and social betterment he pledged the large part of his vast wealth. He amassed this wealth over the many decades of his career, often enduring great personal privation, living like a poor man for most of the time.

Michelangelo’s unique standing begins with his very birth. Whereas, in the case of many 15th-century masters, we do not even know the exact year in which they were born, and have only an approximate idea of their family ancestry, we are well informed about Michelangelo’s origins and birth. Like other members of Florence’s upper middle classes, his father, Ludovico di Leonardo Buonarroti Simoni, recorded important events in his family chronicle, including the birth, on 6 March 1475, of the second of his altogether five sons. Michelangelo was born in the town of Caprese, near Arezzo in the upper Tiber Valley, where his father had been appointed magistrate (podestà) for a term of one year. The family subsequently moved back to Florence, where they lived alternately on a small country estate in Settignano and in a city residence in the S. Croce district of the city. This information itself reveals that Michelangelo and his father belonged to a class of society whose members were eligible for public office. Ludovico Buonarroti was also a Guelph and as such part of a political tendency whose supporters sought to defend the city of Florence against the threat of foreign rule. This threat might come from outside, for example from the papacy or the emperor, but also from within, from Florentine families such as the Medici, whose claim to power clashed with the republican ideas of the Guelph middle classes.

He amassed his vast wealth over the many decades of his career, often enduring great personal privation, living like a poor man for most of the time

Inevitably, Michelangelo’s political proximity to the Guelph party provoked conflicts with important patrons on several occasions. In the first decades of his career, these patrons included first and foremost the Medici. This family had steered Florence’s political fortunes in the 15th century in an indirect rather than direct fashion, via a broad network of political alliances, and also through lavish patronage of the arts. In the 16th century, on the other hand, the Medici increasingly opted to enforce their hegemony over republican tendencies quite openly and at times brutally. The potential conflict inherent in Michelangelo’s position was heightened by the fact that he took the first steps of his career as a sculptor under the protection of Lorenzo de’Medici (1449–1492). Generally speaking, we are extraordinary well informed about Michelangelo’s life, right up to his death on 18 February 1564. Only in the case of his very early years and his beginnings as an artist are we obliged to rely in part upon legend and conjecture. Our information about the artist’s youth comes from the lives of Michelangelo published by Giorgio Vasari (1550 and 1568) and Ascanio Condivi (1553). Condivi in particular aims to portray the artist as a youthful prodigy who received no training of note. This biographer also tends to present Michelangelo’s behaviour towards his patrons in a favourable light. This is particularly true in the case of the conflict lasting four decades over the completion of the Julius Tomb. The accusation that the artist had not always correctly disposed of the vast sums entrusted to him continued to hang over him nonetheless.

“Although he became rich he lived like a poor man, and he rarely if ever invited his friends to eat at his table”

Michelangelo is also one of the first artists of the early modern era whose appearance is well known to us, thanks to numerous portraits by his artist colleagues. These likenesses show a bearded face with high, sharply defined cheekbones and a broad, somewhat flattened nose. Michelangelo’s characteristics also emerge from the writings of his contemporaries: they evoke an untidily dressed, even somewhat unkempt, man who lived modestly, who could at times be generous towards his inferiors and also rude towards his employers. But there must also have been a well-dressed Michelangelo, who liked expensive shirts and afforded himself the luxury of a good horse. The earliest description of Michelangelo by a contemporary, and one that is probably plausible, is provided by Paolo Giovio around 1527, who writes: “The man with this talent was also so curt and uncouth by nature that, leaving aside the incredible filth of his domestic life, he granted posterity no successors in his art. For although implored to do so by the princes, he could never be persuaded to take on an apprentice or even allow onlookers in his workshop.”

Michelangelo’s physique is vividly described by Condivi: “Michelangelo is of sound constitution; his body is sinewy and bony rather than fat and fleshy; it is healthy above all by nature and from physical exercise as well as his continence regarding sexual intercourse, as well as food; though in childhood he was very indisposed and sickly, and as a man he has had two serious illnesses.” The extent to which Michelangelo agreed with this description is revealed by some recently published notes in the margin of Condivi’s 1553 text: these notes can be traced back to Michelangelo himself and state, for example, that he considered sexual abstinence to be useful and the prerequisite of a long life.

Vasari, the painter and artist biographer who originated from Arezzo, also describes Michelangelo’s austere way of life: “For example, as a young man he would be so intent on his work that he used to make do with a little bread and wine, and he was still doing the same when he grew old, until the time he painted the Last Judgement in the [Sistine] chapel, when he used to take his refreshment in the evening after the day’s work was finished, but always very frugally. Although he became rich he lived like a poor man, and he rarely if ever invited his friends to eat at his table; nor would he ever accept gifts from anyone, because he feared that this would place him under some kind of permanent obligation. This sober way of life kept him very alert and in want of very little sleep, and very often, being unable to rest, he would get up at night and set to work with his chisel, wearing a hat made of thick paper with a candle burning over the middle of his head so that he could see what he was doing and have his hands free.”Within this description, Vasari’s mention of Michelangelo’s candle-holding hat may be a little fanciful, but from an analysis of his bank account and from what we know about his household, the artist’s frugal lifestyle is not difficult to reconstruct.

As is well known, Michelangelo’s “trademark” was his squashed nose, the story of which is told by the Florentine goldsmith and sculptor Benvenuto Cellini (1500–1571) in his celebrated autobiography. Cellini relates how fellow sculptor Pietro Torrigiani (1472–1528)—unlike Cellini, a declared opponent of Michelangelo—broke his rival’s nose in a fight in the Florentine church of S. Maria del Carmine. Cellini repeats Torrigiani’s version of events as follows: “This Buonarroti and I used to go along together when we were boys to study in Masaccio’s chapel in the Church of the Carmine. Buonarroti had the habit of making fun of anyone else who was drawing there, and one day he provoked me so much that I lost my temper more than usual, and, clenching my fist, gave him such a punch on the nose that I felt the bone and cartilage crush like a biscuit. So that fellow will carry my signature till he dies.”