Larry Cottrell and Tom Parks in a still for the Mizer film Telephone Lineman, 1964.

Robert Henry Mizer, universally known as Bob, took his first commercial physique photo in 1946. By 1956 he’d photographed 1000 men, this at a time when there were no male model agencies, no discrete ads in alternative newspapers, and certainly no rentboy, backpage, or grindr.com. To commemorate his accomplishment, Bob released his highly collectible Thousand Model Directory in 1957, a 98-page, 8.25- by 5.25-inch booklet featuring over 1000 men, presented 12 to a page in tiny thumbnail photos. Superficially, it was a catalog, offering 12-photo sets of each model, but it was equally a boast—1000 men have stripped for me—and a compelling record of the first 10 years of Athletic Model Guild, a company first conceived as a clearinghouse for physique photographers that quickly became just Bob, all Bob.

1000 models over 10 years may not seem that extraordinary, since it averages to just 100 new models a year, but it took Bob time to build momentum, and he lost most of 1947 to a nine-month prison term. Launching Physique Pictorial, America’s first recognizably gay magazine, in 1951 consumed more weeks, so the majority of those 1000 men were shot between 1952 and ’56, at a rate exceeding one a day, in a rooming house crowded with his aged mother, older brother, and one last, stubborn lodger.

My first intention was to reproduce those original 1000 models, to choose the best image from each set and blow it up so you could actually see it. Bob shot all his early work on 4- by 5-inch sheet film so, theoretically, every photo could be enlarged to poster size. However, as I began hunting through the early sets in Dennis Bell’s lovingly kept AMG archive, it became clear that some men really looked best at thumbnail size. So I expanded my parameters to 1966, when a second Thousand Model Directory was published, marking the end of Mizer’s posing strap period. With 20 years of models to choose from the odds of finding 1000 compelling men increased dramatically, and, let’s face it, the fun increased as well, since I now got to look at 250,000 photos instead of a mere 100,000. It took about 30 days, divided into 10 archive visits, spread over a year, but then I’m unusually thorough. Dennis and I had to see every photo in every set to know that this volume truly represents the 1000 best, from model #1 to Bob’s first full nudes of Brian Idol in ’66.

It all began with 16-year-old gymnast Forrester Millard, shot by 24-year-old Bob in mother Mizer’s parlor. Forrester was straight, as were most Bob models, but still eager to return to the Victorian rooming house near downtown Los Angeles for more photo sessions. “It was fun,” was his simple summation when Dennis Bell interviewed him at age 79 in 2008, so fun that he collaborated on 15 shoots over 14 years. Bob had the knack for making shoots fun and, more crucial, for making his boys feel special. It shines in their eyes as they gaze up into his lights, their shoulders squared, muscles flexed, oiled skin glistening. Even the street toughs, the hoodlums who were Bob’s Kryptonite, look touchingly proud, heroic, and faintly excited, elevated for an afternoon from bar brawler to gladiator.

Once Bob photographed Forrester he couldn’t stop. Friend and fellow photographer David Hurles says that any day without a model left Bob cranky, that he’d rather shoot a subpar specimen than none, that he took his identity from the nearness of near-naked men. Fortunately, feeding his habit was easy.

Bob’s ability to engender trust, to instill his passions in others, to convince boys on the beach to travel across town, strip down, and pose, was as important to his 47-year career as his photographic skills and movie-driven imagination. As evidenced by his diaries, begun at age 14 and maintained until death, his vision was formed early and never wavered. He was openly gay from boyhood, with not even a token prom date, and determined to do something of lasting importance with his life. When he was imprisoned in 1947 on false charges of sex with a minor model, he wrote his mother, “I feel more strength now than ever before, but this strength, this driving energy, shall be carefully bridled and directed with wisdom . . . my ambition is everything—pleasure, physical sensations mean nothing compared to great accomplishments.” Pretty strong statements from a son convicted of sex crimes, but more, they reveal Bob’s early, unwavering determination. Part of Bob’s success in finding those first models was his precocious maturity. Artist John Sonsini, who continued living in the block-square, barbed-wire-enclosed AMG compound after Bob’s death, found a wallet in the photographer’s childhood attic bedroom containing a scrap of paper with the typewritten edict:

Bob realized early that accomplishing his goals required him to become a confident leader, a man other men would trust, admire, and obey. His attraction to masculine strength demanded that he be masculine and strong. At age 18 he recorded an incident in his diary where his mother’s boarders mocked a gay friend’s effeminacy. Bob would not be mocked by straight men, while fully acknowledging his orientation. “I’m straight, but [posing for Bob] didn’t bother me at all,” early model Ben Sorensen told me when I was writing Bob’s World for TASCHEN back in 2008. “Bob was a real gentleman.” Bob found Ben at the original Muscle Beach, in Santa Monica, California, as he did most of his early models. Along with friends Bob Burns, Ed Smith, and Steve Gooding, Ben liked to exercise nude on secluded beaches in the late ’40s, and let Bob tag along to take photos. They all knew he would sell their photos, and to whom, but as Ben noted, “The guys got free pictures and some of them were worth showing to their friends,” a rare gift in those days. What Ben couldn’t articulate was how hungry he and his fellow bodybuilders were for recognition back before Joe Weider and Arnold Schwarzenegger made muscles big business. The girls on the beach were largely indifferent, but Bob understood just how, and how much, to boost their egos.

Bob helped thousands, if not millions, of men embrace their gay identity, including artist David Hockney, who famously claimed he came to Los Angeles for two reasons: a photo by Julius Shulman of Case Study House #21, and Bob Mizer’s Physique Pictorial. There were several bodybuilding magazines on the stands in 1951, when Physique Pictorial debuted, notably Strength & Health, Ironman, Your Physique, and Muscle Power, but no physique magazines, nothing based solely on the homoerotic allure of muscular men. Gay men bought the bodybuilding magazines, but always with the knowledge that they were trespassing in hostile, hetero territory. Bob changed that. Though he photographed many of the same muscle stars as Strength & Health, in Physique Pictorial their eyes and attitudes were more welcoming.

David Hurles said that when he, as a teenager, first saw the magazine on a newsstand in his native Cincinnati, Ohio, he felt instantly included, as if the men were beckoning him to look. This, again, was Bob’s talent, to coax flirtation from his straight models, to capture their muscles, and their personalities, to make the viewer imagine they were there just for him. John Sonsini, who painted backdrops for Bob from 1986 until his death, said that a Bruce Bellas photo showed you someone you wished you could be, whereas “when you looked at a Bob Mizer photo, the look in the man’s eyes said ‘I’m here for you, and I mean you: the gay man.’”

Bob worked right up until March 1992, when he hauled himself to the studio on gouty legs, with failed kidneys, three weeks before his death, to photograph one last model. In all, he photographed around 10,000 men, 4,000 physique style and 6,000 fully nude, and if he’d photographed 10,000 more, he’d still have felt he hadn’t done quite enough for his fellow gay men. David Hurles said, “Bob was happy to get up every day for 47 years knowing that what he had to do that day was photograph naked men. That is what Bob Mizer did and that is who he was. Period.” As these 1000 men prove, that was much, much more than enough.

The cover of the original Thousand Model Directory, self-published by Mizer in 1957. It actually contained over 1000 thumbnail sized photos on 98 pages.

Dan Holder, Dennis Sanfacon, and Jim Stafford in a still from the film Gay Caballero, 1963. 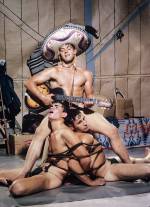 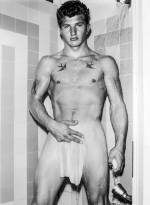 John Tristram and Forrester Millard, two of Bob’s most popular models, pose by the compound pool, 1959. 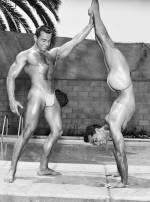 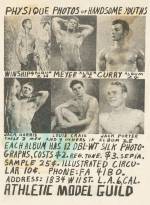 John Waters Shares his Love for Tom of Finland

The Life and Boys of AMG's Bob Mizer

I’ve Never Seen One So Big!

An Intimate Tour of Tom’s House