From the book The Sixties by Kishin Shinoyama.

In 1980 New York, all women were bisexual. Every sex club admitted women for free, or for some nominal fee—and single men not at all—to facilitate threesomes between all the presumably bisexual women and swinger couples. It was all so modern, so damn cool, even if bisexual men were banned at these same clubs.

“She’s just not in the mood,” her embarrassed husband insisted, but “No,” said Seka, “I’m not into women. I only do that on camera.” We were speechless, and secretly delighted, that someone of her sexual status would dare to say what many of us felt. Because, basically, most of us there were just doing other women for the universally understood, if unacknowledged, reason that it drove men berserk.

We figured this out in the 1970s, when sex-positive feminists championed our right to orgasm, and lesbian feminists posited chicks doing chicks as a sisterly imperative.

For ’70s straight girls bi-curiosity meant power and adventure, sticking it to The Man, and to disapproving men. Except many men didn’t at all disapprove of such experimentation, especially if it meant your girlfriend bringing home another essentially straight girl for some radical vaginal bonding.

Other men, often older, and firmly invested in female servitude to the mighty phallus, found the bi rebellion more alarming. Norman Mailer was so incensed by Kate Millett’s Sexual Politics, published in 1969, that he wrote The Prisoner of Sex in rebuttal. An issue-filling excerpt was published in Harper’s Magazine, March 1971, and a month later Shirley Broughton’s Theater For Ideas arranged a showdown between the proud sexist pig and four top feminists. All knew it’d be a brawl, but what got the headlines was not the hostile repartee but the lesbian canoodling. As Playboy reported: “Immediately after Jill Johnston delivered a witty, free-form paean to her sexual preferences (‘All women are lesbians except those who don’t know it yet . . . ’), a female friend leaped onstage. Jill and friend embraced, were joined by a third sister of Sappho, and all three laid loving hands on one another as they rolled about the floor . . .

“Mailer, in a climax of misunderstanding, snapped, ‘Come on, Jill, be a lady!’ Jill by then was barely visible beneath the bodies of her friends.”

It’s fair conjecture that Playboy, struggling to formulate a position on women’s lib in 1971, would not have devoted half a page to Town Bloody Hall, as it came to be called, if not for the titillation of girl/girl action. Ms. Johnston, at 42, was neither young nor especially hot, but she was making out with two other women in public, and men—if not Mailer— just had to dig it.

And we were all about natural back then. Even if we didn’t all feel the same tingle kissing a woman as when kissing a man, neither did we find it repellant the way men claimed to feel about contact with a guy. It was, perhaps, this melodramatic fuss, the gagging, retching denials that they could ever respond to a “hairy ass,” that made us accept men’s claims of our innate nature. Girls didn’t make us gag, and since a third of women weren’t reaching orgasm with anyone—a sad constant through the decades—many thought not gagging was good enough. And it made men so happy! So happy, and so excited, that they could be manipulated into doing almost anything just to watch.

Spring break as we know it, wherein college students invade a resort town to drink, puke, randomly hook up, get stupid tattoos, and pass out in public, began in 1960, with Where The Boys Are, a film about college girls vacationing in Fort Lauderdale, Florida. The spring following the film’s release over 50,000 kids converged on Lauderdale; by 1980, over 200,000 showed up. Then the sucking, kill-joy mid-’80s came and the city raised the drinking age, limited party size, and dispersed the hordes to South Padre Island, Texas; Panama City, Florida; and Cancun, Mexico.

In these safe havens spring breakers evolved unmolested—except by each other— forming their own arcane customs and rituals: the Jell-O shot, beer pong and keg stand, tramp stamp, wet T-shirt and bikini contests, mass breast-flashing and, sometime in the early ’90s, competition lesbianism. The game evolved naturally, with two attention-hungry girls kissing; two others raising it to breast fondling; two more writhing in mock coitus, with the action escalating as long as the boys howled approval.

The sport remained amateur until 1997, when entrepreneur Joe Francis bought some video of girls exposing their breasts and making out during spring break. Girls Gone Wild was born, ushering in a joyous return to sexual exhibitionism powered by booze. The videos, flogged on TV infomercials, made more than $ 20 million their first two years. Of course, as will happen with fortunes built on indiscretion, it went bad eventually, with multiple lawsuits, both civil and criminal, resulting in serious fines and prison time for Francis (legal tip: do not suggest your jurors “should be euthanized”), but leaving 13 glorious years of bisexual hi-jinx to treasure.

Which brings us to 2010, a very fine decade for girls getting jiggy. Consider: In 2011 researchers at Boise State University—that’s the Boise in Idaho, one of 12 states still banning sodomy—declared, as in the ’70s, that women are bisexual by nature. A full 60% of the 484 subjects said they were sexually attracted to women as well as men, and 45% had kissed a girl. Psychology professor Elizabeth Morgan said, “Women are encouraged to bond emotionally. This could lead to the development of romantic feelings.” And apparently has for a growing number of celebrities. In the last decade Christina Aguilera, Azealia Banks, Drew Barrymore, Cara Delevingne, Cameron Diaz, Fergie, Megan Fox, Lady Gaga, Amber Heard, Angelina Jolie, Miranda Kerr, Kesha, Bai Ling, Lindsey Lohan, Madonna, Demi Moore, Anna Paquin, Michelle Rodriguez, Amber Rose, Evan Rachel Wood, and even Jersey Shore’s Snooki and JWoww have proudly announced their bisexuality.

The television industry’s response has been numerous opportunities for bisexual expression. The L Word, 2004 to 2009, featured an uncommonly attractive group of girlfriends, inspiring The Real L Word: Los Angeles in 2010, about an equally attractive group of real lesbians. That same year, from Canada, came Lost Girl, about a bisexual teenage succubus programmed to feed off human lust. Not to be outdone, England’s Channel 4 launched Bi-Curious Me in 2013, a reality series about three pretty young women exploring samesex options. Currently in the US, top-rated series The Good Wife, House of Lies, and Orange Is The New Black all feature strong, pretty, empowered bisexual heroines, each borrowing a bit from that primetime bisexual pioneer, Olivia Wilde, who began as a teen bisexual on The O.C. in 2004, then moved on to play steamy, troubled bisexual Thirteen on the medical drama House. She may not have made a credible doctor, but what man doubted those love scenes?

Yes, TV’s cooked up a rich stew of girl/girl action. Bisexual women are universally portrayed as sleek and pretty, smart and independent— basically, ideal role models for all impressionable young girls. Thanks to this skillful media manipulation women now embrace the bisexual paradigm with the zeal of the ’70s, sans politics; the expertise of the ’80s, without the swing clubs; and the abandon of the ’90s, minus the hangover. A man hardly need type “hot bisexual” into his search engine now to find three-way fantasy fodder.

Of course, the three-way itself is still largely out of reach, but keep your hopes alive: One never knows how far this thing can go, given the mass media push behind it. Just witness the trajectory of that ultimate media construct, Miley Cyrus: first photographed fake-kissing a girl at 14; in a probing tongue-kiss on Britain’s Got Talent at 17; revealing her bisexuality to boyfriend Patrick Schwarzenegger at 21 (he described it as a “huge turn-on”); then announcing her bisexuality to the world at 22. Of course, once you’ve got that bi ball rolling the trick is making it stop on your number: Miley told OUT magazine, in May 2015, that she has to be “free to be everything,” hinting that she has fluid gender identity, which is totally trending, but a bit beyond the average male fantasy. Still and all, you have to take the sour with the sweet, the pickle with the peach, in this mad old world, and if the price of a three-way means Miley with a strap-on, are you really going to turn it down?
Becky and Iris by John Emrys. 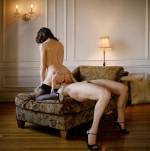 The Summer of Love

The Big Book of Legs