Rising from the ashes

A meticulous record of the city that lay buried for more than 1,600 years

The lower half of the view shows the southern part of the Via di Mercurio looking south, with the so-called Arch of Caligula at its end. The upper zone of the picture, however, faces north towards Vesuvius.

From Lucera, 1786—with a Medusa head as its central motif. The mosaic was reused as flooring in a vase gallery in the Museo Borbonico in Naples.

“Rome is simply a vast museum; Pompeii is a living Antiquity.”

In a letter to his friend, the Roman historian Tacitus, Pliny the Younger described the devastating Vesuvian eruption of 79 AD as “a catastrophe which destroyed the loveliest regions of the Earth.” At the same time, he expressed his belief that this “remarkable natural occurrence” would ensure immortal fame for the cities which had been affected and the people who lived there.

In fact, it was only with the rediscovery of Herculaneum and Pompeii and the beginning of excavations, in 1738 and 1748 respectively, that the Vesuvian cities would emerge out of the ashes into the spotlight of Western culture. As ever more sections of the ancient cities were uncovered, the scope of their significance and interpretation was also constantly expanded.

Initial excavations at the sites, instigated by Charles VII, King of Naples and Sicily, were primarily aimed at enriching the holdings of the royal museum and remained the preserve of a courtly elite. Numerous contemporary travel journals give a lively impression of the difficulties that faced even such famous visitors as Johann Joachim Winckelmann and Goethe when it came to obtaining access to the excavations and finds.

It was not until the 19th century that publications on the Vesuvian cities began to reach beyond restricted courtly circles and reveal the cities and their treasures to a wider, international public. The magnificent volumes of the Case ed i monumenti di Pompei (Houses and Monuments of Pompeii) by Fausto and Felice Niccolini can be understood as the sum of this development. With detailed descriptions and over 400 color lithographs, the publication conveyed a comprehensive impression of Pompeii to the reader: not only by way of the vedute and maps of the city, the views and ground plans of its public buildings and private houses along with detailed plates compiling the artworks and practical utensils found there, but also through “animated” reconstructions of everyday life in Antiquity: shops, bars, workshops, public squares, temples, theaters, and baths. This notion of a living Antiquity was also, for the Niccolini brothers, what made the “modest Pompeii” a serious rival to Athens and Rome. It was a preserved social space—a unique testament to ancient civilization.

Integral to this social space were ancient room decorations of a previously unseen wealth and variety and in an excellent state of preservation, revealing remarkably vivid and bright colors. Alongside Rome, the Vesuvian cities became the most important stop on every educational tour and the style variously described as Pompeian, Etruscan or à la grecque conquered the whole of Europe.

Royal palaces, the residences of the nobility, and soon, too, bourgeois homes were now fitted with a Pompeian Cabinet or a Pompeian Room complete with furnishings, utensils, and porcelain in the Pompeian style. These were modeled on ancient originals, although increasingly too upon their neoclassical interpretations and reinterpretations. Trendsetting examples of such decorative schemes included the interiors by Robert Adam at Osterley Park, and Karl Friedrich Schinkel in the Berlin Stadtschloss. In Italy, significant interiors in the Pompeian style were created in the Palazzo Altieri in Rome, the Palazzo Milzetti in Faenza, the Palazzo Baciocchi in Bologna, and the Villa Doria d’Angri and Palazzo di Capodimonte in Naples.

Architectural model of Pompeii—detail showing the theatre district, seen from the south.

In 1839 Ludwig I of Bavaria commissioned his court architect Friedrich von Gärtner to build an idealized reconstruction of the Casa dei Dioscuri, which had been excavated just a few years earlier. As soon as 1842 the designs were finalized and construction work began on the Pompejanum, on a terrace above the River Main and surrounded by vineyards and Mediterranean gardens. The interior décor was likewise intended to satisfy the most exacting antiquarian demands: Johann Martin von Wagner, the king’s most important artistic adviser, selected suitable originals in Naples, which were then copied by trusted painters.

Open to the public right from the start, the Pompejanum was conceived as a synthesis of the arts that would convey an authentic impression of the way in which people lived in Antiquity. Almost completely destroyed in World War II, the Pompejanum was subsequently rebuilt, but today we must look first and foremost to Gärtner’s design drawings to appreciate the extraordinary quality of the original interiors.

Similarly ambitious was the Maison Pompéienne, a homage to Antiquity in the heart of Paris, built between 1854 and 1857 for Prince Prince Jérôme Napoléon, but later sold and demolished in 1866. Here too, the architecture, wall decorations, furniture and furnishings were modeled on Pompeian originals but whereas Ludwig I was motivated above all by his antiquarian interests and enthusiasm for Antiquity, the Maison Pompéienne carried stronger political connotations: it was conceived as a utopian alternative to modern times and as a programmatic statement of the restoration under Napoleon III (1808–1873).

Pompeian architecture and interiors remained in vogue even into the opening decades of the 20th century. The Getty Villa, completed in 1974 for J. Paul Getty in Los Angeles was designed by Stephen Garret on the model of the Villa dei Papiri in Herculaneum and today houses the Getty Museum’s collection of antiquities.

Alongside the mounting volume of archaeological evidence, the idea that Herculaneum and Pompeii provided an “authentic” insight into daily life in Antiquity was a key determining factor in their reception. Equally major roles were played by “living” reconstructions of the past and the superimposition and interaction of ancient and modern. In the Palazzo Sessa, the Neapolitan residence of Sir William Hamilton, Emma Hart, the later Lady Hamilton, captivated a cosmopolitan public with her famous “Attitudes,” in which she dressed and posed as ancient statues and figures from Pompeian murals.

Collection of decorative and utility items variously made of marble, bronze, and terra-cotta.

Views of Pompeii were increasingly peopled not only with sketching artists, excavators, and tourists, but with imaginary ancient protagonists. This trend towards bringing Antiquity back to life and cementing it within a contemporary context developed in the second half of the 19th century into a distinct representational tradition. In 1813–14, Ingres had visited Naples and the Vesuvian cities during his student years and continued to reference the Pompeian murals even as late as his 1856 Portrait of Madame Moitessier, whose pose is derived from the allegorical figure of Arcadia found in the mural of Hercules and Telephus in the Basilica in Herculaneum.

By the 1920s and 1930s, after the move to abstraction and an increasingly rapid succession of isms replacing one, as well as the traumatic experiences of World War I, modernism in many places entered a phase of classicist self-reflection. A return to order, the “ritorno all’ordine,” was the new catchphrase and the search for new mythologies and “grand” form led artists to turn their attention once more to Antiquity. The Pan Pipes, painted in 1923 by Pablo Picasso programmatically embodies this Arcadian current. At more or less the same time, Giorgio de Chirico was painting worlds inspired by the perspectivism of Friedrich Nietzsche as much as by wall paintings from the Vesuvian cities.

Pliny, then, believed correctly. From elaborate neoclassical residences to 20th century metaphysical paintings, architects and artists have time and again turned to Pompeii and Herculaneum as a source and inspiration. Once discovered, the Vesuvian cities not only provided a uniquely “living Antiquity,” but also lived, and live on, in appropriations and reinterpretations across Western visual culture.

Reconstruction of the atrium in the Casa del Poeta tragico—there is no archaeological evidence for the roof construction, the painting of the upper wall zone or the wooden walkway for the upper story. 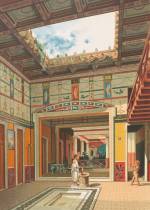 Head of a Persian man, detail from the Alexander Mosaic in the House of the Faun. 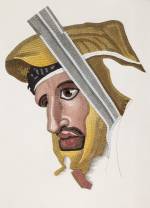 Frigidarium—wall decoration on the east side: Silenus reclining in a garden, propped against a wineskin. 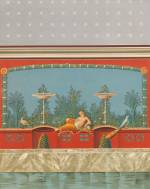 Under the covers of the Weimar Republic