Kabul has been emptied of most of its population. Each armed faction that has conquered part or all of the city has provoked an exodus. In any event, there are now few places left to live. When the Russians abandoned Afghanistan in the late 1980s, Kabul was more or less intact. But after numerous battles in the country’s sporadic civil war, the city was left in ruins. This photograph shows what remains of the once-prestigious Jade Maiwan Avenue, 1996.

“In the course of my various reportages, I had witnessed so many tragedies that I believed I was now accustomed, but I hadn’t expected to encounter such violence, hatred, and brutality.” –Sebastião Salgado

It is almost a generation since this book was first published, yet in so many ways the world it portrays has changed little since poverty, natural disasters, violence, and war continue to force millions of people to abandon their homes each year. In some cases, they get no further than refugee camps that quickly swell into small cities; in others, they gamble their savings and even their lives on the dream of reaching some mythical Promised Land. Today’s migrants and refugees may be the product of fresh crises, but the despair and the glimmers of hope written on their faces are little different from those recorded in these pages.

For one region of the world, however, change has come with dramatic speed and unpredictable consequences. In the 1990s, China and India were already experiencing massive peasant migration to their cities, while the United States had long been a magnet for Mexicans and other Latin Americans. But Europe was totally unprepared for the immense wave of migrants and refugees from the Middle East who swept into the region in 2015. Overnight, the human tragedies in faroff lands that Europeans could safely overlook now reached their streets and the waters that lap their shores.

As always, the catalysts that set in motion sudden movements of peoples are to be found far from the cities and countries where migrants eventually seek solace. In this case, the American-led invasions of Afghanistan and Iraq sparked the initial radicalization of Muslim populations in a dozen lands. This was followed by the sadly misnamed Arab Spring that offered the false promise of hope to countries long under dictatorial rule. And when these revolutions failed everywhere except Tunisia, many Muslims looked to Europe as their safe haven of choice.

Immigration as such was not a novelty for Europe. From the 1950s through the 1970s, Europe welcomed cheap labor—for Britain and France, from their former colonies; for Germany, from Turkey, and the former Yugoslavia. Then, from the 1980s, as doors gradually closed to non-Western foreigners, illegal migration increased, spawning the Mediterranean’s first “boat people” of Arabs and sub-Saharan Africans trying to reach Spain and Italy.

But the war in Syria created a refugee crisis on an entirely new scale, with civilians the inevitable victims of a multifaceted power struggle involving Westernbacked rebels, Kurdish separatists, the Islamic State and the besieged Assad dictatorship. At first, the problem seemed to be largely “contained” as millions of fleeing Syrians filled refugee camps in Jordan, Lebanon, and Turkey. But as conditions in these camps deteriorated, the idea of moving on caught on. And from spring 2015, the flow of refugees heading for Europe turned into a flood, with daily boatloads of families crossing from Turkey to Greek islands, and a growing number of people drowning as rough seas overturned overcrowded dinghies.

For months, Europeans were confronted with the grim spectacle of hundreds of thousands of migrants trudging through fields, blocked for days at national borders and begging for help. And among them were not only young men, but elderly couples, women, children and even babies in prams, their hopes kept alive by Germany’s promise to receive them. But while Germany and Sweden alone took in close to one million migrants, much of Europe turned its back on them, fearing a xenophobic backlash from right-wing groups which even in Germany and Sweden soon began harassing refugees.

One complication was that, among the fleeing Syrians, there were also many people from Iraq, Afghanistan, Pakistan, Eritrea, and other near-failed states who jumped at this once-in-a-lifetime chance to find work in Europe. And aggravating the situation, the European Union proved incapable of either persuading its members to share the burden of taking in Syrians or of setting up an orderly system for distinguishing genuine refugees from economic migrants. The bottom line is that Europe has become increasingly unwilling to receive those fleeing war and oppression.

The mood in other developed countries is not more welcoming. Far fewer Mexicans are entering the United States than in the past, but they have been replaced by Guatemalans, Salvadorans, and Hondurans trying to escape drug-fueled gang warfare at home. Americans were shocked to discover that large numbers of Honduran children were crossing Mexico on their own to try to enter the United States. But Washington’s response has been to press Mexico to tighten its borders with Central America so that, in a sense, the new American frontier now lies two thousand miles to the south.

Since the publication of this book, then, the focus of global attention may have shifted, but the phenomenon remains the same. What is often forgotten is that most people migrate for no other reason than sheer necessity. To move to a distant city or a foreign country involves great risks—of deprivation, loneliness, even hostile populations. But while rural poverty persists, dictatorships repress their societies and civil wars rage, the instinct for survival will continue to drive people from their homes in search of safety and a better life. This book tells their story.

© all images: Sebastião Salgado/Amazonas Images
With as many as 350,000 arriving at the refugee camp at Benako in just four days, the initial conditions were deplorable. Most people arrived almost emptyhanded. It took several more days for the United Nations and humanitarian organizations to create some semblance of order. As these photographs show, it rained almost every night, forcing refugees to build makeshift shelters out of pieces of blankets, which offered no protection against the strong rains of the region. Thus, many people who had arrived here healthy soon fell ill. The lack of drinking water and improper hygiene facilitated the spread of infectious diseases. Tanzania, 1994.

A small boat, or patera, with 27 migrant Moroccans on board, is detected a few miles from the Spanish coast by a Spanish helicopter equipped with an infrared night vision device. The men are arrested minutes later by a customs service patrol boat, but they are lucky: their boat’s engine had failed and they would have drifted into the Atlantic Ocean. Strait of Gibraltar, 1997.

One of the consequences of sudden migration to a large city is the disintegration of families. Such is the struggle for survival that families frequently break up in this everyman-for-himself environment where begging, prostitution, and theft become the norm for many youths. Desperate parents abandon their children or entrust them to government-run institutions like the Foundation for Child Welfare (FEBEM). This photograph shows abandoned babies playing on the roof of a FEBEM center in the Pacaembu district of São Paulo against a backdrop of middleclass apartment buildings. Some 430 children live here, 35 percent of whom were found abandoned on city streets; the others were delivered at the center by parents no longer able to care for them, 1996.

The hospital in the camp at Katale is one of the largest hospitals of the Goma region and, almost single- handedly, it looks after a population of 250,000 refugees. Working conditions are difficult because the camp is far from the humanitarian supply center at Goma (28 miles, 47 km away) and is built on volcanic lava. Since it is almost impossible to bury the dead in this ground, the bodies are placed in cracks in the lava. Depending on the direction of the wind, the smell in the overcrowded hospital can be unbearable. Zaire, 1994. 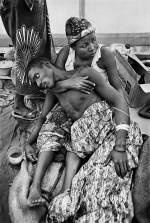 Lélia and Sebastião Salgado at SESC

A Conversation between Sebastião Salgado and Alan Riding

Restoring the rainforest with Sebastião and Lélia Salgado

The photographer presents his epic new monograph Kuwait: A Desert on Fire
Acid Express
Alien and beyond