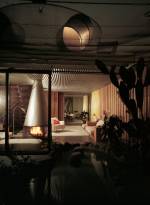 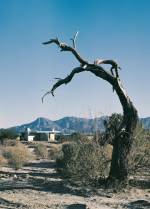 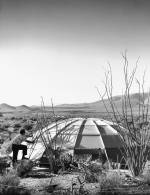 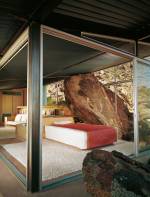 The Master of Modern: An Oral History in the making
By Hunter Drohojowska-Philp

The entrance to Julius Shulman’s photography studio faces his driveway just a few feet before the front door to his house. Yet, delivery boys and novices typically walk past the open screen door of his studio to mount the stairs to his house. Shulman, who is usually in his studio, watches this parade with amazement and irritation. To draw attention to the studio entrance, he has hung an enormous banner bearing his name. It makes no difference. Visitors still bypass the door to his studio.

His desire to match the rigor of the modernist architects with a discipline of his own, is paramount.

Shulman cannot imagine anyone overlooking that screen door because, for him, the studio so obviously comes before the house. He worked with architect Rafael Soriano to design it in just that fashion in 1950 after acquiring seven acres of land near the intersection of Mulholland Drive and Laurel Canyon in the center of Los Angeles. His dedication to his photography, his desire to match the rigor of the modernist architects with a discipline of his own, is paramount. The office being placed before the house is a metaphor for his way of being. When I call him around 8:30 in the morning, he answers brightly,“Good morning, Julius Shulman.” As far as he is concerned, the business is up and running. I visit a few times a week to write captions for the photographs in Modernism Rediscovered Volume 2, but getting an appointment is not easy. I have to squeeze in amidst the constant stream of supplicants who are writing books and articles about him, organizing exhibitions and making documentary films, arranging his archives and setting up appointments for him to photograph more buildings with his partner Juergen Nogai. Did I mention that he is 95 years old?

Soriano built the house on a nearly barren hilltop now overgrown with native plants and towering redwoods that Shulman planted as saplings half a century ago. As we work on captions, he faces the window wall of a courtyard and its population of birds who squabble over the seed that he feeds them. Once in a while, a deer will make a leisurely pass around the garden.We spend hours eating pieces of the chocolate that he keeps handy and looking at his pictures of hundreds of houses that seem radically modern even today, houses that were commissioned by clients committed to architecture as a cause.

“Architectural historians are not always correct,” he insists.

There are dozens of high rises, schools and civic buildings designed by architects to shine in the future and not as pastiches of recycled historical styles. Shulman’s photographs give these structures a respect they are not always accorded in life. Many were demolished or altered beyond recognition. His photographs capture their glory. Shulman remembers every building and occasionally offers a corrective to some information I have gleaned through my own research. “Architectural historians are not always correct,” he insists.

Despite the soothing effects of chocolate and birds, we quibble. Shulman, like many architects, is irritable about the decorative. “Architecture is about space!” he says.We spend an entire morning debating the caption for a kitchen designed by Paul László. I think the pink refrigerator is divine. Shulman thinks it a topic best avoided in a kitchen that is otherwise orderly and disciplined. Shulman, of course, wins. Architects take their work seriously and so does he. If they have their frivolous moments, we needn’t draw attention to them. The architecture and the photography of it must be where we keep our attention.We finish and Shulman looks up triumphant, his eyes twinkling, “That is how you write a caption!”