How The Floating Piers came afloat

Preparatory sketches for The Floating Piers

The first visitors flock over the completed piers, Saturday 18 June.

Christo on location of The Floating Piers, Lago d’Iseo. 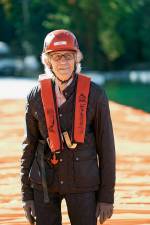 Christo in his studio working on a preparatory drawing for The Floating Piers, New York, November 2015.

Christo on location of The Floating Piers, Lago d’Iseo.

As The Floating Piers opens at Lago d'Iseo, Italy, Christo talks to TASCHEN’s Eliza Apperly about the realization of a waterborne dream.

Lake Iseo in Northern Italy is not as well known as its Como cousin across the mountains. It is slightly smaller, a little quieter, with fewer celebrity residences dotted along its shores. This summer, however, the cerulean expanse 100 kilometers east of Milan and 200 kilometers west of Venice will host one of the art events of the century.

Between June 18 and July 3, 2016 Christo and Jeanne-Claude’s The Floating Piers will extend a 3-kilometer yellow fabric walkway from Iseo’s lakeside settlements of Peschiera and Sulzano across to the soaring island of Monte Isola and its diminutive island neighbor, San Paolo.

When the first visitor set forth on the shimmering, undulating pier, it was the fruition not only of intricate technical and logistical planning but also of a tenacious creative vision on the part of Christo and Jeanne- Claude. “Jeanne-Claude and I made 22 projects together,” Christo says, “but we failed to get permission for 37. Some of the projects were refused but they stayed in our hearts and minds. That is the story of The Floating Piers.”

The couple first proposed a floating surface on tranquil waters back in 1970 with an inflated pier for the Rio de la Plata delta in Buenos Aires. The project was never realized. They tried again in 1995, shortly after completing Wrapped Reichstag in Berlin, with a proposal for several floating piers in the Daiba area of Tokyo Bay. For various reasons, this too was subject to a late cancellation. But the couple would not give up on their idea: “Jeanne-Claude loved it, and I love it.”

In 2014, five years after Jeanne-Claude died, Christo was driving through Northern Italy and scouted Lake Iseo. As well as its pristine setting and crystal waters, the lake’s 400-meter high Monte Isola (Mountain Island) is the tallest freshwater island in Europe. “It’s as tall as a Manhattan skyscraper!” marvels Christo. He decided to give the project another go.

For the earliest developmental stages, The Floating Piers remained secret. Tests were carried out in discrete locations in Northern Germany and on the Black Sea to ascertain the arrangement, stability, and anchorage of the floating cubes, as well as to finalize the thickness and Dahlia yellow color of the overlying fabric. “Visually and technically, we cannot decide the final project from the studio. For all our temporary works of art, whether it is an urban or rural setting, we do a life-size test at a one-to-one scale.”

The project was announced in April 2015 and Lake Iseo became a hive of activity. Trucks shuttled the pier’s floating cubes from production plants to the project headquarters at Montecolino. Some 100,000 square meters of yellow fabric and laser-cut PVC strips were sewn together into panels. Pier sections were bolted together, with steel insert triangles allowing for gentle curves in the walkway's path. And 190 anchors weighing five tons were installed to secure the piers to the lake bed, some 270 meters down at the deepest point.

In order to enhance the play of light, color, and texture in the project, Christo decided to include 20% more fabric than the actual length of the piers. He also scheduled the project during the longest daylight hours of the year to maximize the shifting optic effects. “The lake has constant humidity and the color reacts and changes constantly. It glows red in the morning and moves through gold and yellow over the course of the day.”

For Christo, this interaction between the pier and the Iseo environment is integral to the project. “Our works go beyond art in a museum or private collection. We inherit everything that is inherent to the space, and it all becomes part of the work of art.”

The project openly appeals to the visitor’s own movement through this space. The arrangement of the piers is designed to invite the visitor’s approach. “Straight lines are very important to the project. The piers have a very invitational, commanding aspect. It is all about walking. Including the stretches on the land, you have to walk five kilometers to appreciate the project, the constantly changing views, the lake, the mountains, the other visitors. All these things together are the final artwork.” The experience is as tactile as it is visual. “Walking barefoot is the best thing. To feel the undulation and the fabric. It is spooky, sexy…”

It is also explicitly temporary. On the surface of this ancient glacial lake, The Floating Piers will be open 24 hours a day, but for 16 days only. All elements will then be removed and recycled. The transience is inherent to Christo and Jeanne-Claude’s practice. “We are saturated with transportable art, from art fairs to touring exhibitions. But humans like things that are unique. That happen once and never again.”

TASCHEN’s editions on The Floating Piers will span the complete concept, planning, process, and final installation of this one-off waterborne marvel. A Collector’s Edition produced after the project’s conclusion will be designed and conceived by Christo himself. The books will add to an extensive Christo and Jeanne-Claude library in the TASCHEN collection, including The Gates, Umbrellas, Wrapped Reichstag, Wrapped Trees, and the Collector’s Edition monograph Christo and Jeanne-Claude.“

“We met Benedikt in 1994, during the last push for permission for Wrapped Reichstag,” Christo recalls. “It has been such an important relationship. The books are integral to each project. They are like working tools… sourcebooks of the creative and technical process.”

From July 4, once the piers have been taken down, the visitors have left, and the glistening fabric has been rolled back in to shore, The Floating Piers books will also be official documents of an event and an experience that will never happen again. The plans, sketches, and photographs will testify that what was once deemed impossible came afloat after all, zig-zagging across Lake Iseo in a triumphant blaze of fabric, light, and color. “The Floating Piers will be here, and then it will be gone forever. These books show us what was anticipated, and what was realized.”

US$ 35,000
This edition is sold out. However, occasionally, copies do become available again. If you would like to be put on the waiting list, please register your interest here.

The Floating Piers in pictures

The artist signs copies of his new book