In conversation with Allen Jones

TASCHEN: Can you tell us a bit more about the concept and creation of the Naomi Campbell Collector’s Edition artwork?

Allen Jones: Benedikt had a clear idea of what he wanted when asked if I would design a box for Naomi’s book. He had seen an acrylic multiple of a stylized woman’s chest that I had made in Zurich during the seventies and thought it an appropriate idea for his project. A box that did not attempt to illustrate Naomi, but to encapsulate her.

TASCHEN: In 2013, you also worked with Kate Moss, later poster girl for your Royal Academy show. How do you see the supermodel within your broader work?

AJ: The supermodel exists essentially as a virtual figure in the media. In the studio, a woman of flesh and blood, like Naomi, has the uncanny ability to transform herself before our eyes into an ‘ideal self’, as seen through the eye of the lens. In a portrait commission the artist is expected to give themself to the sitter. Where as for the purpose of art, the sitter gives themselves to the artist. For that reason I have great anxiety when asked to do a commission. On the one hand I do not want to take liberties with the sitter and cause offence nor do I wish to compromise my art.

TASCHEN: You’ve spoken about your art as a personification of the human condition. While some of your work involves male figures or, in pieces such as Man Woman, Sin-­Derella, and First Step, fluid gender identities, much of your practice involves the female form. What does the female particularly express about our human condition?

AJ: Matisse said that in a sense, all of an artists work can be seen as a self portrait. Freud and Surrealism showed that our interior world is as legitimate a subject for art as the visible world around us. I am compulsively drawn to the female figure and when I am drawing it feels as though I am tracing a contour on my own body. I am drawn to smooth surfaces that invoke a sense of touch. For me Ingres is more real than Degas.

TASCHEN: You’ve spent most of your life in the U.K and are among the luminaries of first generation British Pop Art, but you also spent time in the United States. What distinctions would you draw between British and American Pop Art?

AJ: I lived in the U.S for around five years at different times, between 1964 and 78. Abstract expressionism had already challenged the tradition of representational art and its use of illusionistic space. In the sixties pictorial space was uniformly flat, from Ellsworth Kelly to Roy Lichtenstein, whereas in the UK, I cannot think of any pop artist who did not employ some sort of illusionism. Before going to New York I thought this was a collective failure of nerve, subsequently I realized it was simply a cultural difference. 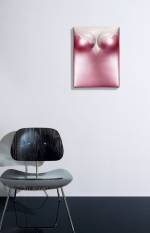 Naomi Launch at the Chemosphere

The supermodel launches her Collector’s Edition