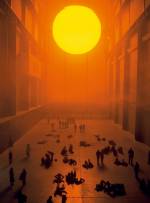 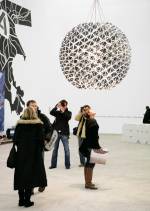 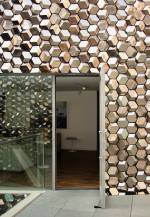 From Observer to Co-worker: In Olafur Eliasson's Studio
I had heard how, at Olafur Eliasson’s studio in Berlin, a whole group of artists, architects, and technicians work and experiment together as they would in a laboratory, so I arranged a visit as part of my research for an essay on the modern-day artist’s studio. On an icy-cold day in January 2006 I stood in front of the studio, located in a warehouse right next door to the Hamburger Bahnhof Museum for Contemporary Art. This part of the city had always fascinated me. For decades it lay on the edge of West Berlin, close to the Wall, but has now once again regained its position at the heart of the German capital, a place where the “East-meets-West” feeling still pervades. On one side are construction sites, warehouses, small industrial companies, and haulage contractors. On the other, the main railway station, the Federal Chancellery and Reichstag building—an ideal neighborhood for the studio of an experimental artist like Eliasson.

I was fascinated by this notion that the artist could seem like a client in his own studio, since it goes against the popular image of the artist as an independent creator

At the heart of the studio is a large, well-lit space where finished and half-finished works of art stand around and materials for various projects are spread out on large tables. Scattered about the place are instruments for measuring spatial and chronological phenomena, along with refractors, mirrors, and prisms of every shape and color. Here, installations are tested, built and dismantled, geometric shapes are explored and adjusted, parts of façades erected, prototypes hung on walls and scrutinized, and reflections of light studied. I visited the studio several times and each time it looked different.

The first time I was there, I noticed the chassis of a BMW on which Eliasson was working, having been commissioned to turn it into an art car. Another time, small-format prints of photos of his most recent trip to Iceland were spread out on large tables. From among them he was choosing suitable shots to be enlarged and assembled in a series. The hall has a fitted kitchen and a long table at which everyone can eat lunch or take a break.

Above the large central area is a gallery. There, a group of about eight architects was working under the supervision of Sebastian Behmann. (More of this later.) In the basement is the work space of Einar Thorsteinn, an Icelandic architect, theoretician, and artist with whom Eliasson has worked for a good ten years—their first joint project was a pavilion built in 1996—and whose geometric models in cardboard, paper, and plastic are among Eliasson’s many sources of inspiration. From 1969 to 1971 Thorsteinn worked with the architect Frei Otto. Nearby is the workshop where various colleagues assemble artworks, saw wood, solder wires, and weld metal. A specially designed white room is used to test optical effects and find out how our perception of objects changes when they are lit with varying shades of white light. Everywhere there are wooden crates for transporting artworks to galleries and museum spaces all over the world.

The atmosphere in the studio is relaxed, professional, and productive—a mixture of architect’s practice and laboratory— and usually as busy as a small city. Eliasson has a staff of around thirty. On my first visit, architect Kerstin Schmidt was gathering information on the history of the camera obscura and building models of different sizes in order to combine several camerae obscurae in a single work—for example fifteen are used in Dreamhouse (2007). Eliasson has long been interested in this piece of equipment, which links photography and architecture and enables several people to observe visual phenomena at the same time. Between 1999 and 2006 he created five such works: Camera Obscura (1999), 360° Camera Obscura (1999), Camera Obscura for the Sky (2003), Camera Obscura für die Donau [Camera Obscura for the Danube] (2004), and Kaleidoscope With Camera Obscura (2006).

Eliasson has long been interested in the camera obscura, which links photography and architecture and enables several people to observe visual phenomena at the same time

After the workshop staff, the architects make up the largest group in the studio. Sebastian Behmann showed me some of the current projects, including a vision for the Hirshhorn Museum and Sculpture Garden in Washington D.C., which explores the communicative potential of the building in order eventually to optimize it. Further on, I saw a kaleidoscope that was to feature in a planned hexagonal walk-in installation with three entrances. The intention was that viewers should be able to step into it as they would into a small summerhouse and observe a variety of refractions and patterns created by light entering from above. Just at that moment Portuguese architect Ricardo Gomes was working on a series of geometric color samples from which Eliasson would select a few for further processing. A British colleague, Ben Allen, was busily making sketches of the movements of the sun. This is one of the basics of an architect’s training, enabling him, for example, to calculate how shadows cast by buildings will affect neighboring structures. In this case, however, it was not about anything so practical, but an exploration of how solar curves could be used to generate a design for an arts center in Iceland. The walls were covered with print-outs of different variations, with analogue and digital representations in a variety of colors.

A large part of the work, as Behmann pointed out, consisted of independently researching one’s own ideas, sketching models, and producing series of drawings. What they were used for and whether they would be included in an actual project was of secondary importance. He told me that, from an architect’s point of view, Eliasson sometimes seemed almost like a client.

Behmann described him as someone who provided concepts and ideas, who approached the team of architects with precise wishes, asked for suggestions, and then selected the ones to be developed further. I was fascinated by this notion that, under certain conditions, the artist could seem like a client in his own studio, since it goes against the popular image of the artist as a totally independent creator demanding full control at every stage of a project, from first sketches to finished product.
Share
Whiteness is All
Giver of forms
Whiteness is All
Giver of forms