The Man from La Mancha

On the set of High Heels (1991). With Miguel Bosé (here as Femme Letal) rehearsing “Un año de amor”/ “A Year of Love,” a hit from Becky del Páramo’s pop period. After the film opened, the song became an instant classic among European transvestites.

Just like 20 years before, Antonio never stopped joking throughout the shoot, a sign that Hollywood hasn’t changed him much.

Some Notes About The Skin I Live In
By Pedro Almodóvar

The first images in the film show a mansion surrounded by trees, an idyllic place. It’s called El Cigarral, and it’s protected by stone walls and a high, barred gate. Through one of the mansion’s windows, also barred, we can make out a female figure in motion. Once we are inside the room, the woman seems to be naked as she carries out a series of complicated yoga positions. In the closeups we discover that she isn’t naked, she is totally covered by a flesh-colored body stocking that clings to her like a second skin. In the kitchen, Marilia, the housekeeper, prepares the woman’s breakfast, which she then sends up in a dumbwaiter that opens directly into the room.

From the outset, El Cigarral is portrayed as a prison in the midst of nature. The first actions that show us Vera, the captive woman concentrating on her yoga positions, and Marilia, her jailer, seem strangely routine, lacking in any tension. But life in El Cigarral wasn’t always so peaceful.

In her six years of enforced reclusion, Vera has lost, among other things, the most extensive part of the human body, her own skin. Skin is the frontier that separates us from others: It deter mines the race to which we belong, it reflects our emotions and our roots, whether biological or geographic.

Many times it reflects the state of the soul, but the skin isn’t the soul. Although Vera has changed her skin, she hasn’t lost her identity. (Identity and its invulnerability is another of the film’s themes.) This is only one of the many losses that leave Vera on the verge of death, by her own desire or in the operating room. But she is a born survivor and she decides that “she has to learn to live within her skin,” even if it is a skin imposed by Dr. Robert. Once she has accepted her second skin, Vera makes the second most important decision in order to survive: She’ll learn to wait. Elias Canetti, in his notes on “The Enemy of Death” (a title that defines very well Vera’s attitude to life) for Book of the Dead— Notes 1942–1988, writes: “…the uninterrupted pacing of a tiger behind the bars of its cage so that it won’t miss the single, fleeting instant of salvation.”

Curiously, that brief instant to which Canetti refers comes to Vera in the form of a tiger; or rather, a man wearing a tiger costume.

One day, during Carnival, a man in a tiger costume manages to get to the hermetically sealed door of the room where Vera is held captive. This incident breaks the impasse in which the three residents of El Cigarral have been living. Paradoxically, given the customs of Carnival, this is the moment when the characters remove their masks and the final tragedy casts its black shadow without any of them being able to do anything to prevent it.

A story of these characteristics made me think of Luis Buñuel, Alfred Hitchcock, all of Fritz Lang’s films (from the gothic to the noir). I also thought of the pop aesthetic of Hammer horror, or the most psychedelic, kitsch style of the Italian giallo (Dario Argento, Mario Bava, Umberto Lenzi, Lucio Fulci…), and the lyricism of Georges Franju in Eyes Without a Face. After evaluating all these references, I realized that none of them fit with what I needed for The Skin I Live In. For some months I thought seriously about making a silent film, in black and white, with captions that showed descriptions and dialogue, paying tribute to Fritz Lang and F. W. Murnau. After doubting for months, I decided to go my own way and let myself be guided by my intuition— after all, it’s what I’ve always done—without the shadow of the maestros of the genre, and renouncing my own cinematic memory.

I only knew that I had to impose an austere narrative, free of visual rhetoric and not at all gory, although a lot of blood has been spilled in the ellipses that we don’t see.

I’ve been accompanied on this journey by José Luis Alcaine, the director of photography, to whom I didn’t explain what I wanted but rather what I didn’t want; he knew how to give the photography the density, the glow, and the darkness that suited it best.

The composer Alberto Iglesias, the only artist I know without an ego; tireless, versatile, patient, capable of looking in one direction and then looking in the opposite direction if I wasn’t satisfied, always subject to the dictates of the story and my way of feeling it.

And actors who were generous and precise, despite the obvious discomfort of some of their scenes. I’ll name them all: Antonio Banderas, Elena Anaya, Marisa Paredes, Jan Cornet, Roberto Álamo, Blanca Suárez, Eduard Fernández, Susi Sánchez, Bárbara Lennie, and José Luis Gómez.

I watch Elena, who is concentrating on the next shot.

Vera and the Screens
We live surrounded by images, framed by screens of all sizes. From the immensity of the façade of a building to a tiny cell phone whose screen is no bigger than a box of matches, we are bombarded by images of very varied origins and intentions: all kinds of control; exhaustive information, at times in its most sensationalist form; we can see a war as it’s happening, death and desolation being broadcast live; of course there is also the cinema (the cinema and its reflections in the multiple screens that there are on a shoot was one of the bases of my previous film), films, espionage on an institutional or domestic scale; we can see our friends and relatives who live in distant countries on a little computer screen while we talk to them.

The computer screen is an open window to everything imaginable. There are cameras on the streets, on the roads, in elevators, in our homes. The skyscrapers in Blade Runner, whose surfaces showed endless advertising images, have been surpassed by any façade in Times Square. We get the impression that something is only alive when it has been previously filmed and can be projected uninterruptedly, obsessively.

Constantly filming one’s own family is now an everyday occurrence. The family photo album has been replaced by the film of the family members’ lives. We live surrounded by living, moving images. Bad times for civil rights, it’s so easy to violate them and so difficult to defend them. We’re not even safe in our homes; in many cases we are being filmed by security cameras to prevent robberies or any kind of domestic incident, a slap from your husband, the babysitter who could abuse our children, or steal from us, or obtain the detailed document of how we’ve had sexual relations with someone who didn’t know they were being filmed. Not to mention television reality shows, families or groups of people who live in isolation, surrounded day and night by cameras and spotlights.

We are watched and we watch. There are cameras filming everywhere. Death is a deactivated screen, empty, without images. Vera is a captive in a gray room. The room has two windows whose reticular glass panes are like a shield. There are also iron bars. The gray of the floor is only slightly grayer than that of the walls. In the upper corners of the room there are two surveillance cameras that broadcast her image on two screens installed in the large kitchen, where Marilia, the housekeeper, spends practically the whole day. On one of the walls, there is a kind of dark circular bubble, which hides the eye of another camera; its image is broadcast on a colossal screen, which covers half the wall of Dr. Robert’s room.

The screens in the kitchen broadcast in black and white; always general shots that are vigilant, complementary images. The other camera, whose images only Dr. Robert can see in the privacy of his own room, broadcasts in color and is on a level with Vera. Robert can enjoy the life-size image of her, or draw her towards him with the zoom, in which case Vera’s face takes over the whole room.

Cameras are present in Vera’s life, as they are in people’s lives today. But, as well as showing her like a captive animal, depending on her size in relation to the frame, Vera’s image on the screen adds subtle, significant information to the narrative. For example, when the Tiger Man discovers her on the screens in the kitchen, Vera is doing yoga with a rubber ball (the kind used in gyms). We get the impression that he could eat Vera. (That’s what he’ll try to do in the following sequences.) The relationship of strengths recalls that of the blonde who won King Kong’s heart and the gigantic gorilla.

Nevertheless, when Robert comes into his room and switches on the television through which he can see all of Vera’s room with the bed in the middle, the first thing we notice is the size of the plasma screen; centered on the wall, the screen becomes a kind of transparent partition.

When Robert goes up to the chaise longue in front of the screen and zooms in on the image of Vera until he only sees her face, Vera’s face is colossal, gigantic compared to Robert’s body or the dimensions of the room. You could say that Vera’s face dominates the room, and certainly its inhabitant, although he is the last to realize that. In those moments of close, intimate surveillance, although Vera is the victim, her disproportionate face gives off a much greater power than that shown by Dr. Robert, who is contemplating her, entranced. It is she who seems to be watching the surgeon, and not the other way around.
I arrange Elena Anaya’s chin while she practices the “warrior” yoga position.

Dr. Robert’s hands apply the skin, which he has created and cultivated, to a mannequin that is a reproduction of Vera’s body.

Vera manages to escape from her room, but she has only taken two strides when Zeca grabs her by the feet. 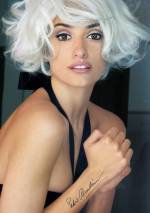 The teaser, designed by Juan Gatti, is a graphic illustration of transgenesis, that is, the natural
coexistence of living beings from all species and natures. 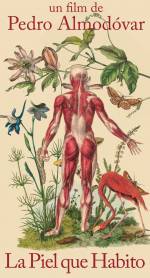 New edition, only US$ 70
Original edition US$ 200
Enter your email address here and we’ll update you on availability: