Norman Mailer, Marilyn Monroe, and Bert Stern meet in this classic tribute to a 20th-century icon 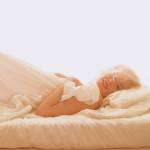 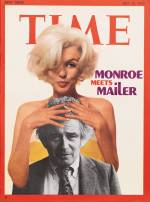 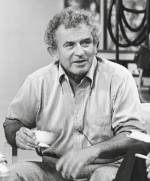 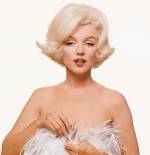 It was forty years ago that I stood face-to-face with Harold Roth, the publisher of Grosset and Dunlap, looked him in the eye, and said, “You get me Gloria Steinem or Norman Mailer and I will let you publish this book.” I held in my hand a portfolio with a trove of pictures of Marilyn Monroe taken by twenty-four renowned photographers, myself among them. By then, she had been dead for ten years, but she continued to bewitch people around the world. My book lacked only one element—a very important one: words! I was sure that the right words would shed light upon the mystery of this legend, whose death had not released her fans from their adoration. Many writers had attempted to explain Monroe during her short life—a mere thirty-six years—but none had managed to capture her. Sometimes I thought it wasn’t even possible.

Why Mailer or Steinem, Harold Roth asked me during our meeting.

The book needed a writer, I explained, whose own life experiences might somehow mirror hers and maybe open up a perspective on Marilyn that we didn’t even know existed. I figured that if we could get a writer who had been run over by a lot of trucks, like Marilyn was, and found a way to survive each time, like Marilyn did, it might reveal the key to this deeply mysterious woman who had transfixed so many people across the world. “Then you want Mailer,” Roth said. “Mailer is your man.”

Roth was sure the project would attract national attention. Mailer had very provocative views on women and on sex, and he gleefully expressed them in public and in his writings. He had provoked outrageous confrontations with feminist icons like Germaine Greer and Jill Johnston, and it had made him Public Enemy No. 1 to the feminist generation of the day.

Mailer writing about the ultimate sex goddess of the 1950s would spell controversy. Pit America’s most provocative and progressive writer—the winner of the Pulitzer Prize for The Armies of the Night, the author of The Naked and the Dead—against this childlike woman—whose every move said something different to everyone; whose life had been torn to shreds by the publicity from three failed marriages; whose whisper of a voice had filled Madison Square Garden as she sang “Happy Birthday, Mr. President” to John F. Kennedy—and you’d wind up with magic.

Everyone would want to know what the bold provocateur Norman Mailer had to say about this fragile goddess. The combination would be irresistible to the press, and that combination equaled publicity—the good kind, the kind that sold books.

Roth delivered Mailer. And Mailer agreed to write a biographical essay to accompany the photographs. Little did we know that Mailer would fall completely in love with his subject—a woman he had never met. He would see every movie she’d ever made, interview many of the people who’d known her best, and, nine months later, deliver a full biography that, paired with the extraordinary photographs assembled, would become an international bestseller in every major language of the world.

For Mailer, Marilyn was “every man’s love affair with America... qeen of the working class… a mirror of the pleasures of those who stare at her... She was our angel, the sweet angel of sex... a sly leviathan of survival... [who] had an artist’s intelligence... [and was] not so much a movie star as a major figure in American life.”

When the book debuted on the cover of Life, it caused a splash. When Mailer saw the cover that Will Hopkins and I designed for Time magazine to coincide with the book’s publication, which showed Monroe tousling his hair, he hit the ceiling. He called me, outraged: “With that cover, I’ll never win the Nobel Prize for literature.” But with all the attention it was getting, he soon forgave me.

Marilyn: A Biography by Norman Mailer generated so much press that it became an instant best seller. The Boston Globe would echo what every reviewer was saying, “... superb. ... Nothing else captures [Marilyn’s] endearing and exasperating persona so touchingly.” Words like “overwhelming,” “brilliant,” “engrossing,” and “unforgettable” found their way into reviews worldwide. The most important news and publicaffairs television shows of the day, like 60 Minutes, covered the phenomenon. The book and its photographs were introduced to the world at the Beverly Wilshire Hotel, in Los Angeles, to a sellout crowd before touring three continents. Many of Marilyn’s costars—Jack Lemmon, Tony Curtis, Eli Wallach, Tom Ewell—and her directors— John Huston, Billy Wilder, and George Cukor—sipped champagne alongside bookstore owners. In Japan thousands waited in the rain for hours for a chance to see the exhibit’s iconic images of Marilyn.

Of all the photographers whose pictures appeared in the original Marilyn book, it seemed that Bert Stern, who had photographed her in June of 1962 just six weeks before her death, captured the widest range of her emotions. His camera offered a window onto every part of her life.

Now, forty years after the original publication of Marilyn and fifty years after her death, it is clear that only Stern’s pictures could truly complement Mailer’s literary achievement. Benedikt Taschen—who had already published MoonFire, featuring Mailer’s extraordinary reporting on man’s first landing on the moon in an illustrated edition—was ready to guide the reincarnation of the original Marilyn. This new volume would be more than just a book, it would be the marriage of two great artists’ work, and a work of art unto itself. The results: Stern’s images give new light to Mailer’s words as no other photographer’s work could, and Mailer’s text gives new meaning not only to the pictures but to the woman whose extraordinary presence is as much alive today as she was when Stern photographed her.

A novel biography by Norman Mailer