Out of the blackout, into the boom years 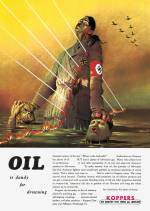 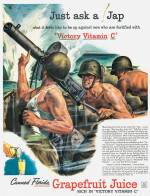 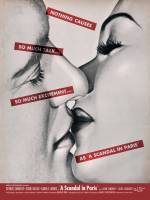 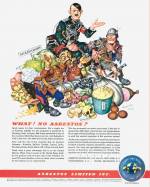 Camel Cigarettes, 1946
What better endorsement for lighting up than knowing that your personal physician or surgeon was enjoying the same pleasure of inhaling the rich flavor of “Camel’s costlier tobaccos”? With over 100,000 doctors surveyed in 1946, logic assumed cigarette smoking was a harmless habit. Health hazard? Who cares. Your T-Zone would let you know how cigarettes affected your throat. And, of course, your doctor’s nicotine habit would sooth any qualms about the safety of smoking. If your doctor smoked, why not you? 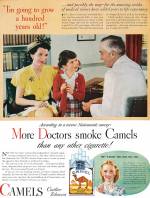 How American advertising of the 1940s distills a decade of transformation
By Willy R. Wilkerson III

At night, motorcycle police patrolled the streets on the West Coast. If a patrolman saw a light on in a window, he would immediately go to the house and tell the occupant to turn it off or curtain the window. If there was a light illuminating an address plate and no one was home, the policeman would fetch a rock and smash the light. This was 1941, and America was at war. There was a blackout in effect after 6 p.m. The year before, Oldsmobile proclaimed it had produced the “Most Modern Car in the World.” But now car manufacturers retooled to make tanks, 102,351 in all, and built a whopping 2,455,964 trucks for the Army.

Women assembled bombers that their husbands and boyfriends would fly to the front lines. During the war, for instance, Boeing built 12,731 B-17 bombers. Buick manufactured radial engines for the Liberator Bomber and said proudly in its ads, “She’s got four ‘B’s’ in her bonnets!” Food industries, meanwhile, made it known that their products were also indispensable to the war effort. Baby Ruth Candy campaigned, “Food Is Fuel For Victory” while Coca- Cola pronounced, “I’m Loyal To Quality.” At the beginning of the war, American merchant ships were being sunk in record numbers off the East Coast by wolf packs of German U-boats. The War Department issued posters warning the public to guard against loose talk. Posters went up everywhere, including bus stations and in tram terminals – of a drawing of a ship sinking with the slogan underneath, “Loose Lips Sink Ships.” Another poster said, “Don’t Discuss Troop Movements, Ship Sailings, War Equipment.”

To help promote the war effort, the film industry, which had provided entertainment for the past three decades, also went to war. While Lockheed and Martin rolled out fighter planes and bombers, the film industry retooled to produce propaganda films instead of features. Filmmakers like Frank Capra, known for the movie Mr. Smith Goes To Washington, spearheaded the propaganda war with his series Why We Fight. Pathé newsreels that ran before film screenings in movie theaters were the evening news of the 1940s. Movie stars traded makeup for uniforms either to sell War Bonds or to join the ranks. USO tours, of which Bob Hope was the supreme master of ceremonies, brought much needed entertainment and a boost in morale to the troops. The recording industry had much to boast about, too. Frank Sinatra crooned his way to the top of the Hit Parade during the war and Glenn Miller had an entire nation dancing.

In 1942, Miller was presented with the first gold record for selling a million copies of “Chattanooga Choo-Choo.”

At home, food and gas rationing did not stop people from going out and having a good time. Despite blackouts and the problem of navigating dark streets, it was a different story in the nightclubs and restaurants in America. Business was booming. The world was ushered into the Atomic Age in August 1945, when the Allies dropped the first nuclear bomb on Hiroshima. And with the Japanese surrender effectively ending the war in the Pacific a month later, America’s love affair with the car began in earnest.

The resulting jubilation sent people into a frenzy of spending and driving. Between 1946 and 1950, 21.4 million new cars were sold. The automobile became the symbol of American freedom and independence, expressed in euphoric road trips from coast to coast. DeSoto advertised, “Why Dream It?… Drive It!” Chevrolet said, “Get A Chevrolet And Get Away First!” Ads weren’t limited only to cars. Firestone, for example, campaigned their Champion Tires showing depictions of racing cars that used their tires. And if the car became America’s midwife delivering people to new exotic locations, the destination itself became the adventure that awaited the new traveler. From Acapulco to Florida, ads extolled the glamorous and the elegant, even catering to specific desires. If gambling was your thing, tropical nights at the tables at the Hotel National de Cuba in Havana awaited.

Many did not feel like driving on their vacation and there were industries that capitalized on this reluctance. Greyhound chauffeured Americans from coast to coast. “Relax With Greyhound!” their ads read. For those who were in a hurry, Boeing and Lockheed built the planes that TWA and American Airlines now used to ferry their passengers across continents.

More luxurious travel, however, was provided by trains and ocean liners. For those who had a fear of flying nothing could compare to the elegance of The Queen Elizabeth that insured passengers would be ferried from New York to Portsmouth in style. The Pennsylvania Railroad advertised, “It’s always fair weather…” as their trains hurtled through the American wilderness, knowing that their scenery was no match for the liners.

In 1947, American women delivered 3.8 million babies, a record, and 32 million by the decade’s end, beating the previous decade’s record by 8 million. Diaper and formula industries in the U.S. flourished. The advertising industry was also quick to capture the attention and the dollars of women’s renewed, post-war interest in style and fashion. Max Factor and Revlon capitalized on glamorous movie connections to their products. Max Factor called its lipstick “Hollywood’s Sensational NEW Lipstick” while Revlon said “Smart Women Everywhere Swear By Revlon.”

In 1946, Hollywood returned to what it did best – making good movies. And there was no shortage. Men of Boys Town starring Spencer Tracy and Mickey Rooney and Suspicion starring Cary Grant were just two of the box office offerings of their day. But the greatest work of genius also came from the post-war era. Orson Welles made Citizen Kane and film critics have been falling all over themselves ever since.

In 1947, movies and radio were threatened by a new innovation every bit as revolutionary as sound was to silent movies in 1927. While enemy troops had invaded the shores of allied countries only a few years before, television now invaded the living rooms of the American public. Families forsook their dining rooms and instead huddled in front of their Motorola or Zenith with meals on their laps and their favorite shows on screen. Zenith, who cornered the TV set market in the late 1940s smugly advertised, “What you have been waiting for…” Despite television’s meteoric rise, Reader’s Digest continued to be the leading U.S. magazine, selling 9 million copies in 1949. Life magazine ranked second, selling 5,305,394.

The advent of canned convenience food began during the war and was brought to American homes when the war ended. Boxed cereals like Kellogg’s Corn Soya asked, “Has the war upset your breakfast habits?” Canned foods, now a staple of the American diet, saw their origins in Spam, the canned ham ration supplied to GIs during the war. Campbell’s soup called itself “America’s Favorite Soup.” Coca-Cola, the drink of GIs during the war, was now saying, “Inviting workers everywhere to the pause that refreshes with ice-cold Coca-Cola.”

Alcohol and tobacco ads during the 1940s were the stuff of screen legends, of Humphrey Bogart smoking a Chesterfield and sipping Chivas Regal at Rick’s place in Casablanca. It was a time when these industries were not bedeviled by politics that led to their ads either being modified or censored or banned altogether.

Consumer products abounded after the war as companies switched from manufacturing war equipment. General Electric sold 100-watt light bulbs for fifteen cents a piece. Kodak film, which had captured the atrocities of war, now documented the pleasures of peacetime in summer backyard barbecues and Christmas gatherings. “Keep Family History” read their ads. For the home, no one could be without a refrigerator. “Only Philco gives you both Dry Cold and Moist Cold…” Philco boasted in their ads. If any toaster was destined to be remembered from the forties, Proctor made sure through their advertising that their toaster would be etched upon the annals of human memory.

The end of the decade saw enormous economic prosperity in America spurred on by the wondrous advances in technology. But the end of one war only saw the beginning of another. The Cold War between Soviet Russia and the United States ignited the decades-long cat and mouse game between the two superpowers that became a reality when Russia acquired the A-Bomb. The fear of nuclear war was ever present, even in school classrooms. In the 1950s, children practiced air raid drills hiding under their desks and ordinary citizens dug bomb shelters in their backyards. Fear crept into American society once more, and propaganda returned to the billboards.
Share
share twitter
How cameras first captured color
Into the Shadows
How cameras first captured color
Into the Shadows