How football became part of pop culture in the 1970s

Pelé and Beckenbauer in the showers after a match against Fort Lauderdale Strikers in Florida. The fact that the photographer was granted such access shows how different the 1970s stars were compared to the guarded players of today.
Photo: Volker Hinz, 1977

Italy goalkeeper Dino Zoff dives too late to keep out this spectacular shot by Ernie Brandts. It was the equalizing goal for The Netherlands, who went on to win the game 2–1.
Photo: Neil Leifer, 1978

Johan Cruyff arrives at French passport control. His Ajax side won 2–1 away to Marseille in the first leg of a European Cup second-round tie.
Photo: Anonymous, 1971 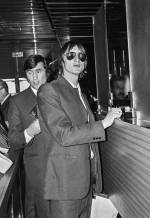 George Best stands outside his fashion shop in Manchester, one of several boutiques in the city. He also started a travel agency and two nightclubs. None of them was a commercial success.
Photo: Anonymous, 1970. 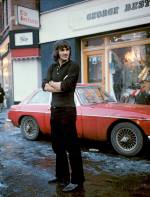 The wives of four England players are present to cheer on the team as they face Brazil. They are Kathy Peters (wife of Martin), Judith Hurst (Geoff), Tina Moore (Bobby) and Frances Bonetti (Peter).
Photo: Roger Parker, 1970.

The David and Victoria Beckham of their day: Bobby Moore and his wife Tina, who is wearing the jersey normally sported by her husband.
Photo:Terry O’Neill, 1972.

Günter Netzer in West Germany training kit prepares for the friendly match away to Greece in November 1970. He scored the opening goal in a 3–1 win.
Photo: Anonymous 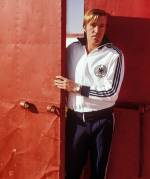 Supporters during the World Cup in Germany.
Photo: Neil Leifer, 1974.

Pelé shows off his Mercedes, which carries a number plate marking his feat of scoring 1,000 goals, most of them for Santos.
Photo: Anonymous, 1970. 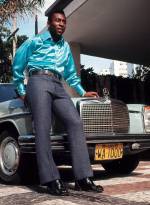 Kevin Keegan in the changing rooms at Hamburg, 1978. Powerful but only 5 ft 8 in. tall, he gained the nickname Mighty Mouse while in Germany.
Photo: Volker Hinz.

Post for Bayern Munich players piles up at the club’s Säbener Strasse training ground during the 1976–1977 season. It has been the club’s base since 1949.
Photo: Volker Hinz

How football became part of pop culture in the 1970s, but retained a certain purity

Football was not so much transformed in the 1970s as fundamentally recast, its every surface refashioned in some lighter, softer, more obviously space-age material. If there is a particular magic to this great decade of change, it lies perhaps in a peculiar sense of innocence that was still in place; the impression, however brief, of something transformed but still unspoilt.

The opening shot in this transformation was the 1970 World Cup in Mexico, the first tournament broadcast live in Technicolor across every continent, and an enduring high point of expressive, imaginative football embodied by the great Brazil team of Pelé, Gérson and Jairzinho, even if this was a decade that would be dominated by Europe.

Central to this era of change was a significant growth in magazines and newspapers across Europe and the Americas, a huge spread in television ownership, and a general ramping up of fascination with the broader entertainment industry. If the 1950s gave birth to the teenager and the 1960s to the pop star, then the 1970s was a time of broader celebrity promiscuity as the machinery of fame, hungry for new stars, turned its glance beyond the established powerhouses of music and film and landed, inevitably, on football.

Football was ready, too. Footballers were hip, empowered, and liberated from the old blue-collar structures of owner, manager and trainer. At the start of the 1970s, Europe’s super clubs had begun for the first time to pay giddily marked up salaries to their star players — a process that would culminate in Pelé’s $ 1.4m a year deal at the New York Cosmos — as movement between the top leagues became more common and a distinct breed of intelligent, charismatic, often agreeably headstrong Dutch and German players began to dominate how football styled itself on and off the pitch.

Even in its tactical patterns there was something intellectually coherent about elite European football as the idea of Total Football took hold, the notion that in the perfect team every player is able to play in every position, to be both a star and a cog in a brilliantly well-grooved machine. Unlike football’s traditionally feudal arrangement, run by owners, directors and managers, with players as a kind of human chattel, Total Football was a statement of aspirational player power, a kind of academic footballing collectivism. With, it cannot be emphasized enough, really good hair.

Johan Cruyff was perhaps the first of this new breed of Euro-cool footballers, with his Catalonian ranch, his supercharged Saab, his outspoken, unavoidably political, public profile. Born and raised in Amsterdam where he emerged through the Ajax nursery to become the definitive embodiment of Total Football, Cruyff was also famous for his Confucian turns of phrase, and an irresistibly provocative charisma. His move to Barcelona in 1973 for $ 2m (paid to Ajax) and an annual salary of $ 600,000 made him into a superstar.

West Germany’s captain Franz Beckenbauer was an equally formidable presence. A great and also revolutionary player in the role of ball-carryi ng central defender, Beckenbauer was born in ruined post-war Munich and went on to become the acme of the big-personality 1970s footballer, that breed of star player who seemed to have been re-cast as a kind of managing director in shorts. The son of a postman who went on to become the most influential man in German football during a 50-year ascent to global prominence that mirrored Germany’s economic triumph over the same period.

This was an age of outward transformation too. The look for the alpha male footballer of the 1970s was not so much beatnik with a ball as successful Californian advertising agency executive. The wide-lapelled leather jackets, the non-ironic medallions, luxury cars and high-end walnut interiors: these were the trappings of the new superstar player, empowered by a transformative collision of burgeoning mass media and a sport in the process of opening itself out into the mainstream. Sponsorship became widespread for the first time, a process that really kicked into gear with Pele’s infamous deal to delay the start of the 1970 World Cup final by pausing to tie his Puma boots.

Franz Beckenbauer and England’s Kevin Keegan advertised Brut cologne and briefly Keegan became the most visible footballer in the world after his move to Hamburg in 1977, where he was awarded football’s first ever “face contract”.

Günter Netzer lived out a more controlled notion of high-end football glamour. A beautifully talented, beautifully blond, beautifully freewheeling creative midfielder, who, when he wasn’t playing for Borussia Mönchengladbach and Real Madrid, owned a bar called Lovers’ Lane, collected Ferraris – and almost died behind the wheel of one – and projected at all times a sense of delicate, soulful, Germanic pop cool.

The overlap with fashion would find its ultimate expression in the North American Soccer League. The NASL was a razzmatazz-laden football start-up whose franchisees included Team Hawaii, Chicago Sting, San Diego Jaws and of course the brilliant, lamented, unrepeatable New York Cosmos. For a two year period during which the Cosmos played in front of 80,000 in the Giants stadium, major celebrities frequented the home dressing room and Pelé and Beckenbauer both wore the Cosmos jersey, they were briefly the most glamorous football team on the planet.

It couldn’t last. Pelé retired in 1977 and the NASL folded seven years later, by which stage the 1970s had already elided into a more urgently predatory world. Football has changed beyond recognition in the years since. It stands before us now as an impossibly starry global entertainment property, a fully-realized sporting world that can seem at times only distantly related to the mud-bound, strangely delicate stylings of the 1970s – its last real decade of innocence.
Share
share twitter