Streisand dons the naughty “modeling outfit” in The Owl and the Pussycat. The color portrait served as the key art for the film’s advertisements, along with the suggestive tag line: “In Doris’ Profession You Have to Know How to Sell Yourself.”
Photo: Steve Schapiro. 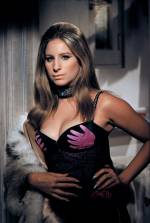 Funny Girl, scene one, take one: “I was excited to get to photograph the clapper for the first take the very first moment when Barbra performed in a movie.” —Steve Schapiro

Barbra Streisand with a Pearl Earring, Los Angeles. With her self-deprecating wit, Streisand often
called herself an ugly duckling, but her screen debut in Funny Girl — and Steve Schapiro’s photographs of her during the making of the film — handily disproved that myth.
Photo: Steve Schapiro 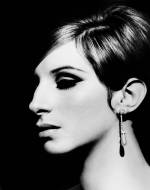 How many photographs have been taken of Barbra Streisand over the years?

Thousands? Tens of thousands? Any one of them can only snatch a moment of her quicksilver life, as a frame of movie film freezes just a fragment of a scene. One picture does capture some enduring qualities of Streisand as she was and was to become. It is not the 1980s Babs with the dandelion corolla of curls. It isn’t Barbra of the long, soigné pageboy, the tastemaker and political mover and shaker of the twentyfirst century. Instead, the image by Steve Schapiro shows her half-shadowed face with the delicate kiss-curl of an ingénue, her eyes with a middle-distance gaze of a soothsayer, and her nose, the nose of the Roman emperor Hadrian, who stamped his will on the great world. We also see Streisand’s metamorphosis in Hollywood thanks to the cameras and eyes of Lawrence Schiller — eye, actually; one was injured in a childhood accident, but Schiller has used his one good eye with more perception and artistry than most people use two. Both Schiller’s and Schapiro’s photographs have compassed decades of the world’s f-stop moments, the sorrowful and the celebrated; and they show a Streisand who is enigmatic, hieratic, exultant, pensive, and, once in a while, still just one happy gal from Brooklyn.

Performers come and go. One generation’s hot number is another generation’s back number. Time, circumstance, fortune, and force of character have aligned to put Streisand beyond those transitions. Only Sarah Bernhardt may equal Streisand in the magisterial command of her own life and career. Bernhardt, too, was a jolie laide, unconventionally attractive, a Jewish woman who forged her outsider status into the wellspring of her power, and became the impresario of her work. A few women in film have tried. Mary Pickford, the world’s first movie star, formed United Artists in 1919 with her husband, Douglas Fairbanks, Charlie Chaplin, and D. W. Griffith. (Fifty years later, Streisand would form the production company First Artists, with Sidney Poitier and Paul Newman.) Pickford was Victorian-born, and in her reclusive old age, she scowled from her upstairs window at Pickfair, alert to whether any woman at a charity luncheon on the lawn below dared to show up in a pantsuit. If Pickford had watched the Oscars on TV in 1969, she must have needed smelling salts when Streisand took the stage to accept the Academy Award wearing a witty, daring, sequined Scaasi pantsuit — the first time an Oscar-winning woman ever showed up in trousers. The Peter Pan collar was the only demure thing about it. To Hollywood, Streisand was laying down her marker: I do things my way. Streisand’s first album came out in February 1963, the same month that publishers launched Betty Friedan’s galvanizing book, The Feminine Mystique — two seemingly 1 6 dissonant events that in fact shared a common root. Her arrival on the national stage coincided with the birthing of the modern women’s movement, which demanded that men stop judging women by their looks and start judging them by their abilities. Change that nose? Not a chance. Streisand may not have intended to be a green light for other less-than-“10” women to be as confident as their covergirl sisters, but that’s what she did. Barbra Streisand with a nose job would have been the unkindest cut. Her face, just as it was, was her fortune. Anyway, as Streisand has often said, she’s too afraid of sharp surgical things even to get her ears pierced. But Hollywood’s knives? Bring them on. By being straightforward and forthright about every aspect of filmmaking, rather than dimpled and demurring, Streisand made herself a target for stings and zingers. What did Hollywood’s moguls make of her, this Brooklyn diva who set out to make films on her terms? They simply wondered, where had that other funny girl gone, the self-deprecating girl who made screwball comedies and laughed at herself before others could beat her to the punch? Then, as now, malevirtues were female shortcomings: a man was hard-driving, a woman bossy; a man was a critical thinker, a woman bitchy…

It has been fifty years since Funny Girl opened on Broadway, since, within the space of three weeks, Streisand appeared on the covers of both Time and Life. In one openingnight newspaper review, the caption under her photo read, “Barbra Streisand impersonates a star.” That was the right verb for about as long as it took the ink on the headline to dry. From that moment until this, Barbra Streisand has been one.
Share
The Man from La Mancha
Into the Shadows

US$ 750
The Man from La Mancha
Into the Shadows