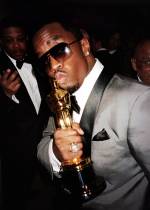 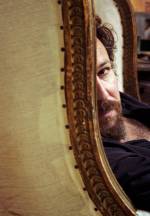 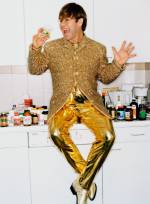 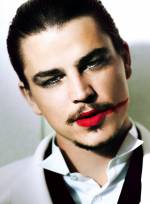 PK: This book is full of images of men who have had a measure of courage in terms of establishing their own identity, which involved a certain degree of redefinition of masculinity in public. David Bowie, Mick Jagger, Andy Warhol and even David Beckham, for example.
MT: I found David Bowie a fundamental figure in my adolescence. In Peru it was hard to express an unconventional personality in a very conventional society. The way Bowie proposed these amazing new ideas of what a man could be without ever losing the impact of his masculinity made a great impression on me. I realized that you have to take the risk of being yourself even if other people are going to find that threatening or irritating. And in another way I think David Beckham’s attitude to his own looks and body, his fearlessness of wearing interesting clothes and his tattoos, have had an enormous effect on the way men in general feel about how they dress and who they can be and how they present themselves.

PK: Whilst often erotically charged, the pictures seem to me to avoid sexual vulgarity. I feel there is an interesting sort of cultivated distance between you and that in the pictures.
MT: I am obviously interested in sex! Naturally. But I think it has to be only an equal part of many different aspects of a picture. I like sensuality and a certain mystery of sexuality. I am not interested in the hard pornographic image as such… That exists for one purpose only, which is nothing to do with the purpose of my work. I am much more interested to create an image which suggests many erotic possibilities. I think that makes a picture have a longer life. In the end I think arousing someone’s curiosity is more interesting than arousing someone sexually.

PK: Which I suppose accounts for a certain amount of playing with gender in your pictures of men?
MT: You could see this whole book as a sort of conversation with my camera about curiosity and freedom. There are many sorts of images. I feel personally that we should all be open to imagine things beyond the ordinary and the everyday. That is why Araki is here in a portrait and as an inspiration. Like Mapplethorpe or Newton and others he has had the courage to investigate subjects that are clearly part of the human imagination. You can reject it or accept it, but you have to acknowledge the quality and the perfection with which the images are achieved. That takes not just courage but a great deal of hard work.

PK: There is another layer to the selection you have made for the book: Unseen private pictures have equal status as images that have become very well known, for example the portraits of David Gandy in Capri.
MT: Ultimately individual quality was the defining factor that had to exist for me to allow a picture to be included. It’s quite interesting that the images I have made for a brand with a whole team of collaborators and assistants can be put next to those of a friend I took on a little camera at home alone. But as long as each holds its own, on its own terms, that’s OK. A private and commissioned image can have equal impact. And in a book, they take on a new life.

PK: I know from working with you that, however spontaneous these pictures might look, every detail has been carefully considered.
MT: Every detail supports the narrative of the picture. You can always change the plan from the first idea of course and I often do so spontaneously. But every picture is driven by the way the person that I am photographing appears at the moment I am looking through the camera. On one hand you might want everything to enhance the idea of someone being perfectly groomed. Then every detail of the composition should support this. On the other hand I might want to create a sense of disorder, as if for example you are seeing someone alone in their bedroom, as if no one else is there. So that is why I arrange and plan everything before and during the shoot… and I am like a scanner when I work, making sure everything in the image, even if it looks as if the place just happened to look like that, adds to the picture.

PK: You have created a sort of heightened reality then. There are very strong visual choices. Color, composition, attitude, style are all decisive. And a game of taste too… playing with ideas of convention and taste.
MT: Well beauty needs to have an edge in fashion, and that playfulness with the edges of bad taste is definitely invigorating and one possibility amongst many. We have a lot of standard expectations and conventional ideas that build up in our minds over the years. That extends to ideas of what is and what is not supposedly “good taste” and what is or is not seen as “manly.” I think we need to be conscious that we should not be too defined by these things. Which is not to say I do not admire tradition and history. In fact I love them both. I thrive when the new is mixed with the old, the underground mixed with the elegant, superimposing high and low culture. That is very much part of the fun of life. I try to bring all these elements together with an equal amount of sensuality.

The photographer handpicks his favorite images of Italy

The world-class photographer signs his books