When were the first color photographs taken? 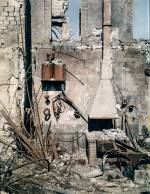 San Francisco after the Earthquake, 1906, half of a stereoscopic three-color photograph. Photo: Frederic Ives

Peterstraße during the Leipzig Trade Fair, early 1914. In three-color photography three areas of the plate were exposed one after another with different filters, which made photographing moving subjects a challenge. Photo: Franz de Grousilliers, Rudolf Hacke 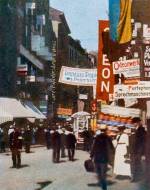 Christmas in Nikolskoye, Russia, 1911. The tree with tiny paper flags of various nations symbolised the hope for cultural understanding at a time when the political horizon had already darkened. Photo: Piotr Vedenisov 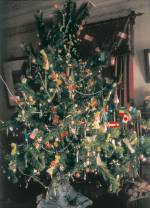 When were the first color photographs taken?
Individual attempts were made to take color photographs as early as the 19th century.From 1902 onwards, the three-color system was used for professional color reproduction, in printing books and journals. In amateur photography, color photography first appeared with the introduction of the Autochrome process in 1907, but color photographs on paper became prevalent only much later: 1941 in the United States, 1950 in western Europe.

What distinguishes color photos from hand-colored black-and-white photos?
To this day, a color photo actually consists of three black-and-white photos. These contain the separate color information for the three primary colors which can be combined to create any other color. This information is stored in different ways: on three separate photographic plates (three-color photography), beside one another as screen dots (in Autochromes and in the sensors of digital cameras) or on top of one another (in the three layers of a color film). With each method, authentic color impressions are captured. By contrast, hand-colored black-and-white photos contain colors applied from memory or imagination.

What do Autochromes look like?
Autochromes are transparent images on glass, similar to slides. They are placed in special viewers or projected for a group viewing.

Why has it taken so long to recover these Autochromes?
These pictures were never forgotten, but were in such poor condition that we could do little with them. It is only with the possibilities of modern, digital technology that we are able to scan the original templates and produce quality reproductions. Dull and often damaged originals turned into color photos of high brilliance. The digital world has also, of course, allowed much greater access to remote photographic archives around the world.

What particular view of the First World War do these photographs offer?
Like most photographs taken during the conflict, these images were often dictated by propaganda purposes. The technical limitations of the Autochrome method also means that photographers were only able to capture particular, static, scenes. Nevertheless, these images are of inestimable value in offering the most vivid version of the First World War that we have. In full color, the people, landscape and many details of this conflict become much more present, despite the distance of a century.
Share
Truth or dare?
Partners in Life and Art

How the Farm Security Administration revealed America to Americans
Truth or dare?
Partners in Life and Art