Little Nemo is back! 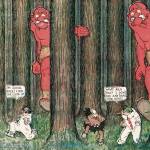 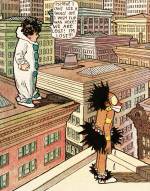 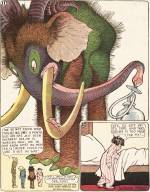 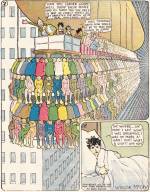 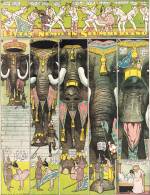 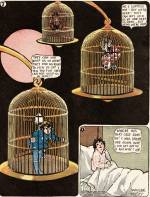 Little Nemo is back!
… and won’t fade into obscurity anytime soon. The triumph of an artist of the century.

Walking beds? Overpopulated commuter towns on Mars? Zoom-like visual effects decades before those kinds of optical lenses were even invented? At the beginning of the 20th century, Winsor McCay’s (1869–1934) pen knew no limits. Everything that could be imagined could also be drawn. Everything that could be drawn became real before the eyes of millions of readers. The energy of a new century, in which everything seemed possible, spiritedly exploding everywhere, erupted from this short, slight New Yorker’s pen in a disegno of fantasy and special effects. One cannot help but characterize Winsor McCay as a seminal genius. Not only did he elevate comics to a completely new level with experimental pictorial inventions and establish serial narration, but he also invented the animated film and developed it further with technical innovations that endured well into the era of Walt Disney.

He was also uniquely ahead of his time with regard to his choice of subject matter. Both of the main works in his comics oeuvre, Little Nemo in Slumberland and Dream of the Rarebit Fiend, deal with dreams or nightmares. Based on sheer volume alone, these strips were no small matter: 549 color episodes of Little Nemo and over 900 blackand- white episodes of Rarebit Fiend—that’s almost 1,500 dreams in just over two decades! What is more, McCay’s extravagant dream work began in 1904: basically on par with the first edition of Sigmund Freud’s The Interpretation of Dreams, which was published shortly before 1900. Freud and McCay were not aware of each other’s work, and the cultural effect of Freud’s Interpretation of Dreams did not even begin to unfold until the publication of the first English edition (1913) and the first French translation (1926). In this light, McCay’s early obsession with depicting the subconscious appears even more astounding and the ignorance of art historiography, which continues to criminally ignore the first surrealist of the 20th century, even more shameful. Strictly speaking, every anthology of surrealism should begin with Winsor McCay, not with André Breton’s Surrealist Manifesto of 1924. Twenty years before André Breton, McCay showed the world the fantastic mechanics of dreams and found relevant images to represent the corrosive power of that which we repress and is buried in our souls. Why doesn’t art history acknowledge this? Simply because it is just a comic and not an oil painting on canvas? At the turn of the century, comics were not a loss-making peripheral matter in the colorful potpourri that is the entertainment industry, but the opposite: Comics were a leading medium! Comics (along with photography) were the first visual mass medium of the early 20th century and significantly contributed to the democratization of the image. While film, which emerged at the same time, was still plagued for quite a while by its limited technical capabilities and the modest number of viewers that could gather in front of a screen, thanks to the newest printing presses, with their extremely high rate of rotation, comics reached millions of newspaper readers—and with new episodes every day at that. It was the major American “yellow press” daily newspapers, in particular, that recognized the appeal of the comics. The paper that offered readers the most spectacular entertainment package also automatically had the edge over the competition in terms of circulation and could thus charge its advertising partners higher prices and so forth.

A lot of money could be made with newspapers; even more could be made with papers that included comic supplements. Readers did not favor the paper with the best sports section or the most up-to-date arts section, but the publisher who had the best and most popular comic artists under contract. The comic figures belonged to the artist who created them, and if they were successful in establishing themselves in the market, their artist also had it made: with social prestige and a stately salary. Winsor McCay, for example, came from the humblest of beginnings— namely, a logging town near the Great Lakes—and more or less taught himself to draw. But just a few years after arriving in New York with his wife and their two children, the family was living in a stately home in South Brooklyn, bought an automobile, complete with chauffeur, treated themselves to a housekeeper and a cook, and soon a vacation home on Coney Island for the summer months. If the Atlantic winds blew too coldly in winter, the family simply moved into a comfortable hotel suite in Manhattan.

The American metropolises grew by up to 2,000 immigrants from the old world every day! They were all starving for bread, work, and a roof over their heads. As soon as these necessities were met (if only barely), the new citizens demanded diversion and entertainment. But who could offer this in the days before the Internet and television? Radio had not even been invented yet and film was (still) limited to an existence as a fairground attraction. Museums and theaters were securely in the hands of the middle- class elite. It was a world off-limits to the lumpenproletariat, especially since they also lacked the money to take part in the arts. They were thus left with cabinets of curiosities in the form of dime museums, vaudeville, freak shows, and sideshows— but also in the form of the comics!

The best means of production of the day, the most expensive and high-quality printing presses ever developed—fast and capable of printing in four colors—were not fired up to make exhibition catalogues or picture books for connoisseurs, but for the production of comic strips.

A large publishing house could print up to 1.5 million copies of its newspaper editions— per day! And around 1900, there were at least 15 newspaper editorial offices vying for the readers favor in New York alone. This had never, in all of history, been seen before: such attractive illustrations, in color, for such a large mass audience, and for so little money.

The comic knew how to seize the moment: In this young art form, which had not yet formed any conventions, there was a goldrush feeling. The new medium existed on a terrain far removed from that of the traditional middle-class arts. This was as exclusive as it was artistically encouraging, because here the etiquette of the nationalnewspaper- worthy forms of entertainment, such as literature, music, and theater, did not apply. Comics lived on the edge of anarchy and, with regard to content and form, took liberties that other art forms simply could not afford to take if they wanted to avoid risking their reputation. Comics meant freedom—freedom for the artist’s hand. And at the forefront, far beyond the rest, was Winsor McCay.

Winsor McCay’s work is thus not only an explosion of creativity, surrealistic fantasy, and art deco grandeur, but also a fascinating genre picture of a society on the verge of a transformation. Higher, faster, farther— the early 20th century outdid itself in superlatives. The world’s fairs set one visitor record after the other, and new inventions, from the Ferris wheel to incubators for premature babies, left people speechless. The stages on Broadway were not only the biggest in the world, but could also be flooded for water shows that then boasted swimming elephants. In 1908, the musical version of McCay’s Little Nemo was the most elaborate and expensive stage show ever produced.

And yet, in spite of all its former economic power and the importance of comics for the multimedia communication society of texts and images in which we live today, the magnificent, colorful pages of the big American Sunday newspapers from the turn of the century will only survive a few more years before the very acidic, yellowed paper irreparably breaks down into its component parts. Where are the big initiatives to rescue and take care of the pioneer days of the comics, to place them in new historical relations and make them accessible to later generations as a crucial part of our cultural heritage?

Here is one such initiative: Winsor McCay’s complete Little Nemo in Slumberland! For the first time since its original publication, McCay’s most famous series is available in one place: all 549 episodes from 1905 to 1927. Restored, color-corrected (to match the experience of original audiences as authentically as possible), and in an oversized format so readers won’t miss one detail. The reprint is complemented by a comprehensive companion book that brings the turn of the century to life and explores Winsor McCay’s seminal work with more than 600 additional images, including original drawings. You can’t get more McCay or more Little Nemo. A long overdue triumph for one of the most important exponents of the cultural history of the 20th century, whose importance extends far beyond the visual arts.
Share
share twitter