Art and the afterlife

Capaneus the Blasphemer
As they travel through the Seventh Circle of Hell, Dante and Virgil come upon Capaneus, one of the seven kings who once waged war on the city of Thebes. In his great pride, Capaneus provoked Jupiter who killed him with a bolt of lightning. Here, Capaneus resides under a rain of fire as punishment for his blasphemy.

The fraudulent Pope
The Eighth Circle of Hell is divided into ten separate ditches, in which the sinners of various forms of fraud receive their punishments. The third ditch is reserved for the Simoniacs: those who have bought or sold ecclesiastical offices and titles. Both on the walls and on the ground are to be found large cavities, their shape resembling that of a baptismal font. Fixed into each of these is a Simoniac, placed upside down so that only his legs protrude, the soles of his feet licked by flames. 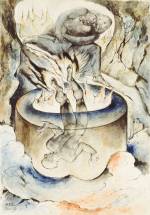 The Circle of the Lustful
The second circle of Hell is reserved for those who were overcome by lust, whose souls are whirled hither and thither by a mighty storm. Virgil shows Dante several famous figures from history and literature, among them Semiramis, Cleopatra, Dido, Helen of Troy, Achilles, Paris, and Tristan. Dante then expresses a desire to speak with one of the unhappy couples: the lovers Francesca da Rimini and Paolo Malatesta, two of his own contemporaries. Francesca recounts with such emotion her own unhappy love story that Dante is so moved with compassion that he faints and sinks to the ground.

The Styx with the ireful sinners
In the Fifth Circle of Hell, Dante and Virgil reach the swamp called Styx. The souls of the Wrathful, condemned to dwell in this filthy bog, are here to be found arguing incessantly with each other. They beat at each other with hands, heads, chests, and feet, and tear at each other with their teeth. 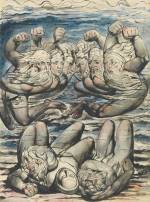 Saint Peter and Saint James
In Paradise, Dante has passed a test set by Saint Peter on faith, and now Saint James arrives, in order to question him on Hope, the Second Theological Virtue. The two mighty Apostles are each enclosed within blazing flames and swoop toward each other as if to shake hands.

Dante, Blake, and epic visions of heaven and hell

William Blake, social-revolutionary, utopian, and esoteric prophet, was among the greatest figures in English culture around 1800. Working as a poet, draughtsman and printmaker, Blake was highly esteemed by artist friends such as John Flaxman and Henry Fuseli but viewed by the majority of his contemporaries as an eccentric figure. The writer Edward FitzGerald, described him as “a genius with a screw loose”.

Between 1824–1827, Blake produced 102 spectacular drawings illustrating Dante Alighieri’s Divine Comedy, widely regarded as the most visionary interpretations of the famous poem. Although he had himself never been to Italy, Blake had long been familiar with Dante (1265–1321), and recognized in his verses a kindred spirit.

Celebrated around the world as a literary monument, The Divine Comedy, completed in 1321, is arguably the greatest work ever composed in the Italian language. The epic lines Dante’s journey through Hell, Purgatory, and Heaven. On a deeper level, the voyage represents the soul’s path towards salvation. The idea of the hereafter has been shaped for centuries by the inventive power and the audacity of Dante’s verses: His complex architecture of the Hell has no literary or theological precedents. It envisages a funnel, deep in the darkness, and situated beneath the city of Jersusalem, like an abyss at the center of the earth. It is a rigorous place of punishment, organized according to precise hierarchies of sins. Dante’s poetic language is infused with powerful imagery in such a way that the realms of Hell, Purgatory, and Paradise assume compelling form, and even the abstract and the alien can seem suddenly familiar. Dante’s poetic imagination draws on many sources, combining his own experience with extensive reading and a veritable cosmos of images. The forbiddingly steep ascent of Mount Purgatory, for example, is compared with the Pietra di Bismantova, a rocky plateau in the Italian Appennines. The patterning of the speckled scaly hide of Geryon, Guardian of the Eighth Circle of Hell, is likened to the carpets woven by the Tatars and the Turks. The tensed body of the giant Antaeus, who sets Dante and Virgil down on the ice of the swamp Cocytus in Hell, recalls the flexed mast of a storm-tossed ship that, in the very next moment, will spring back.

The power of such verbal images and Dante’s references to specific works of visual art could not help but pose a particular challenge to artists, inducing a desire to translate the Divine Comedy into actual images. There is probably no text of the Early Modern period that has so frequently been illustrated. From Botticelli to Signorelli, Raphael to Michelangelo, Doré to Delacroix and Rodin, masters of art history have alluded to the Divine Comedy. Michelangelo engaged with the poem throughout his life and was regarded by contemporaries as a positive authority on its author and his work.

It was the landscape painter John Linnell who, in 1824, commissioned Blake to produce a series of Divine Comedy illustrations. Contemporaries tell us how the now almost seventy-year-old Blake appeared to master Italian in a very short time in order to be able to read Dante’s poem in its original. In what were to prove the last years of his life, Blake was to be discovered by the few visitors he received in his apartment at 3 Fountain Court, off the Strand in London, mostly sitting up in bed, “like one of the Antique patriarchs, or a dying Michel Angelo”, and working intently on the Dante drawings. With the text of the Divine Comedy always to hand, he filled sheet after sheet of a large, bound portfolio of Kent paper, each fifty-three by thirty-seven centimeters. It is clear that Blake was not aiming to devote the same degree of attention to every part of the text, let alone to supply an illustration for each and every canto. Blake, like many other artists, was especially fascinated by the gruesome torments of Hell. Seventy-two of his drawings are devoted to the Hell, twenty to the Purgatory, and ten to the Paradise.

In general Blake’s drawings do adhere astonishingly closely to Dante’s text. Blake is above all concerned with engaging directly with the poem, with exploring its expressive potential through the artistic means at his disposal, and with turning its bold metaphors into visual images of a new kind. The individual drawings are to be found in very diverse states of completion, from the lightly sketched to the fully elaborated, and in their variety offer us fascinating insights into Blake’s working methods. In their range of technical means, the work is also able to encompass the entire range of existential experience evoked by the Divine Comedy, from the dark torments of Hell to the radiant bliss of Paradise.

On April 25, 1827, only a few weeks before his death, Blake declared in a letter to John Linnell: “I am too much attached to Dante to think much of anything else”. His Dante drawings are eloquent testimony to the creative powers which the exchange between poetry and art is able to release.
Share
share twitter