An introduction by Matthias Harder

Cologne, March 1999: June and Helmut in front of the TASCHEN headquarters. 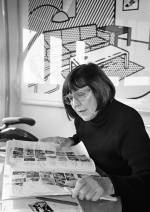 Cologne, September 1998: Helmut and June Newton checking the proofs with TASCHEN’s Head of Prepress Horst Neuzner. Up to six proofs per print were necessary to meet their perfectionist quality standards. 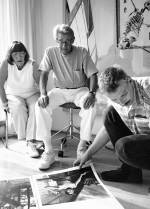 Cologne, March 1999: The entire TASCHEN production team involved in the making of SUMO with the Newtons at the publishing house.

Milan, May 1999: The first book blocks after rounding the spine on a specially made machine. 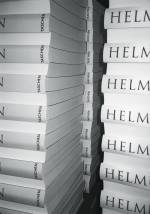 Paris, December 1998: Philippe Starck working on the design of the stainless steel SUMO table at his studio.

Verona, May 1999: Press check at the printer Editoriale Bortolazzi in Verona. 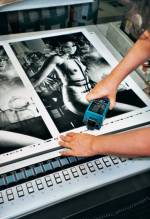 Milan, May 1999: Huge piles of SUMO printing sheets waiting to be bound at Legatoria LEM, an Italian bookbindery for oversized books including rare bibles for the Vatican. Over 350 tons of 250 g/qm BVS-Plus paper, manufactured for SUMO by Papierfabrik Scheufelen, were needed at the printer Editoriale Bortolazzi in Verona over a period of three months. 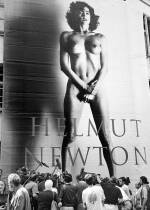 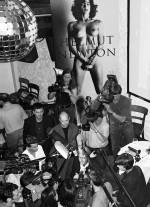 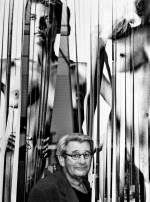 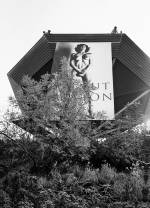 Hollywood, December 1999: Billy Wilder admiring the portrait of him and his wife Audrey at the Taschen residence. 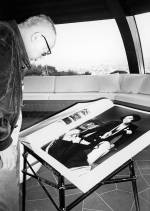 Berlin, April 2000: Helmut Newton, Benedikt Taschen and auctioneer Simon de Pury after the auction of SUMO copy number one, signed by over 100 celebrities portrayed in the book. At 620,000 deutschmarks it made the world record price for a book published in the 20th century.
Photo: Alice Springs
© Alice Springs / Maconochie Photography

Cologne, June 1999: Helmut Newton and Benedikt Taschen with one of the first copies of SUMO in the courtyard of the publishing house.
Photo: Alice Springs
© Alice Springs / Maconochie Photography 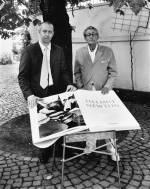 “Twenty years ago, in 1999, TASCHEN published its first monumental art book: Helmut Newton’s SUMO. It had the exceptionally large format of 70 x 50 cm (28 x 20 in.) and was published as a limited edition of 10,000 copies, all signed by the photographer himself. The book came with a custom metal stand designed by Philippe Starck. A copy of the SUMO was presented at the Frankfurt Book Fair, signed by most of Newton’s world-renowned subjects. Shortly after, it was sold at a charity auction in Berlin for 620,000 DM, thus becoming the most expensive book of the 20th century—another superlative.

Ten years ago, in 2009, the Helmut Newton Foundation organised an appropriately unconventional exhibition dedicated to this legendary publication. Each of the book’s 464 pages were framed and arranged in three rows, one above the other. In contrast to leafing through the book page by page, visitors could stand among the hundreds of photographs, seeing the whole book at once.

Now, another ten years later, the Helmut Newton Foundation and TASCHEN celebrate the SUMO’s enduring legacy. As before, an exhibition at the Foundation in Berlin will display the book’s pages in order of their appearance in the book. A new XL edition, the result of a project conceived by Helmut Newton and revised by his wife June, will also be available—a spectacular tribute to the larger-than-life Helmut, now in a friendly format.

In both the XL edition and the Berlin exhibition, we encounter Newton’s work in its broad, irresistible range: from his Big Nudes and Sie kommen series to shoots for Vogue, Queen, Nova, Elle, Stern and Vanity Fair, as well as portraits of renowned figures from Liz Taylor and Jodie Foster to Salvador Dalí and Andy Warhol.

What Newton has passed on to us is an artistic document of the times, sophisticated, challenging, trendsetting—even for the next generation. He was perhaps the most published and most talked about photographer ever. Up until his death, he was booked by the most prestigious magazines and famous designers; his work fascinated and polarised and is still doing so today. All of this is reflected in the incomparable SUMO and the Helmut Newton Foundation’s exhibitions—and through his work, Newton lives on.”

– Matthias Harder, Director at the Helmut Newton Foundation in Berlin

The Helmut Newton, SUMO exhibition is on from June 7 – November 10, 2019.
Steve McCurry in Hong Kong