Antiquarian and illustrator Vito Giallo is one of the few people in the world who not only knew Andy Warhol behind the fame, but also before the artist met stardom.

Back in mid-1950s New York, when Warhol was still a successful commercial illustrator, Giallo became his first studio assistant. Over the course of a year, he covered smaller-scale assignments while Warhol completed more prestigious projects, not least his celebrated campaign for shoe manufacturer I. Miller. Giallo also saw Warhol at work on his hand-drawn illustrated books, whimsical treasures of drawing and wit which he would gift to his most important clients and close friends, Giallo among them.

When Giallo arrived in the studio in 1958, Warhol “was in the middle of the I. Miller campaign. The other little jobs that came in, he would do the drawing, and I would follow his line in ink in the blotted technique.” This now-famed technique began with copying a line drawing onto a piece of nonabsorbent paper, such as tracing paper. Next, this piece of paper was hinged to a second sheet of more absorbent paper by taping their edges together. The drawn lines were inked over and “blotted” onto the second, more absorbent, sheet. The process resulted in the dotted, broken, and delicate lines characteristic of Warhol’s illustrations. Often, they were colored with watercolor dyes or even applied gold leaf.

As Warhol’s reputation as a commercial illustrator climbed, he made sure to recognize key contacts and clients with his illustrated books. Extra copies went to his close friends. Giallo himself received 25 Cats Named Sam and Love is a Pink Cake.

25 Cats Name[d] Sam and One Blue Pussy was Warhol’s first hardcover, bound illustrated book. It was also the first to be colored and to make use of his mother’s handwriting. The “one blue pussy” (above) appears both on the cover and inside.

For all his commercial success, Giallo witnessed Warhol’s cravings for art world renown. “He never considered himself a fine artist but he wished he could be. We often talked about that.”

Warhol had a veritable pack of cats living in the New York apartment he shared with his mother, but for his drawings in 25 Cats, he took inspiration from the books of Walter Chandoha. He chose cats with static bodies and clearly defined silhouettes, using garish colors to make them lively again.


When Warhol’s breakthrough did come, Giallo was initially incredulous. He couldn’t imagine that such a commercial visual language would make it through to fine art acclaim. “To me, he was just a very good commercial artist. (The fame) was a shock really…The soup cans were the first thing he got famous for, but even when he was doing those, I thought it was ridiculous, and so many other people did too. We were all proved wrong.”

After he left the studio, Giallo didn’t see Warhol for some two decades. Then, when Giallo later opened his antique shop on Madison Avenue, Warhol “stuck his head through the door one morning and said ‘Oh Vito! Wow! You must be on easy street!’ Then he came in every single day for the last eight years of his life. He bought thousands of things from me.”

For all his ascent to fame, Giallo saw little change in his former boss. “To me he never changed. I could never see any change whatsoever. He was such a private person. When he was in the shop, women would just run and throw their arms around him in the shop and he would just cringe. He had a very tender personality underneath it all. I see that. A lot of people never did.”

© all images: The Andy Warhol Foundation for the Visual Arts, Inc.
À la Recherche du Shoe Perdu paid tribute to Warhol’s passion as a collector of shoes. The individual sheets also reveal his ambition to become a serious artist. Placed loose in the folded wrapper, they invite the reader to take them out and appreciate them as individual works of art.

The title of In the Bottom of My Garden is a very coarse pun on one of Warhol’s favorite songs, “There Are Fairies at the Bottom of Our Garden,” by Beatrice Lillie, a comedic performer admired at the time by New York’s gay community. Warhol’s tweaking of the title is significant, shifting the focus of the story from a garden to his bottom. It is a humorous wink to Lillie’s gay fans and Warhol’s friends, who would have known the song and understood the cheeky allusion.

Consisting of 25 sheets, Love Is a Pink Cake tells of unhappy liaisons. picturing 11 pairs of famous lovers throughout history, from Antony and Cleopatra to Fatima and Bluebeard. The couples are accompanied by individual words, couplets, or longer poems, often assuming the reader’s prior knowledge of the historical tales. Some of the rhymes are quite lewd, suggesting that the book was intended for an adult audience — one that could appreciate sexual innuendo. 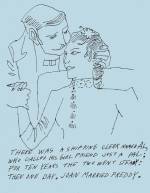