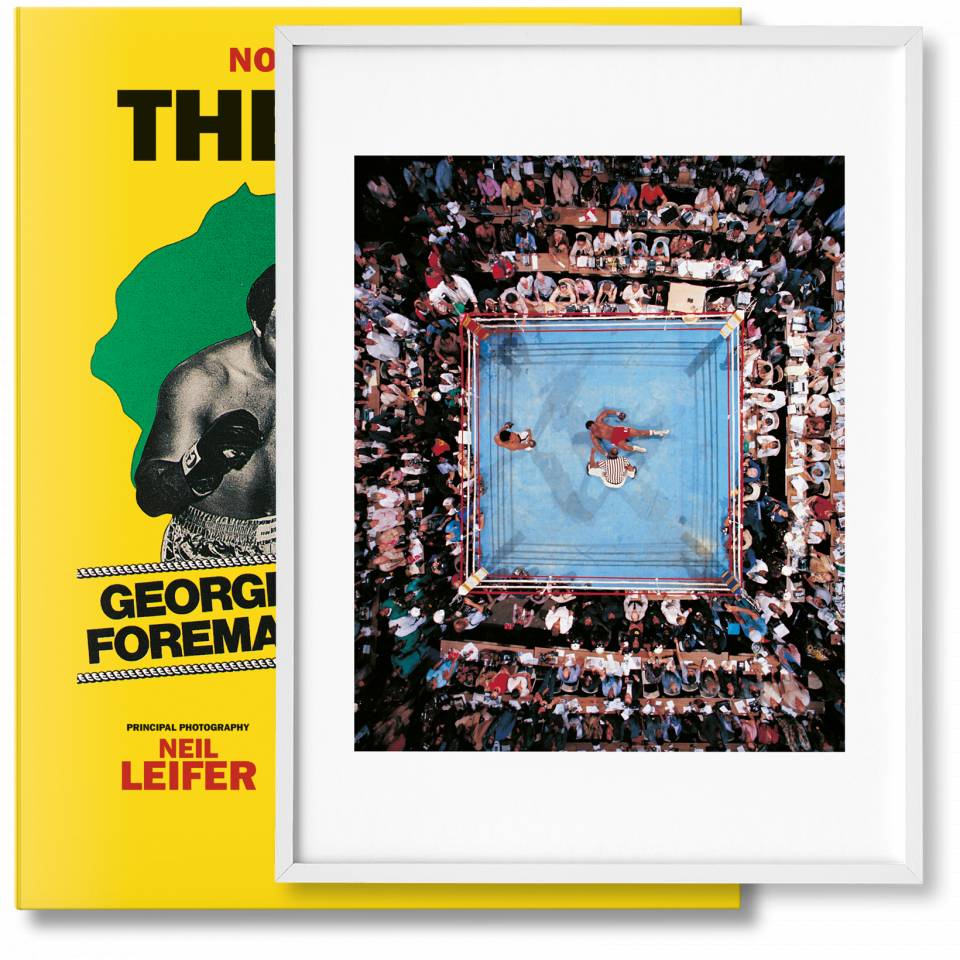 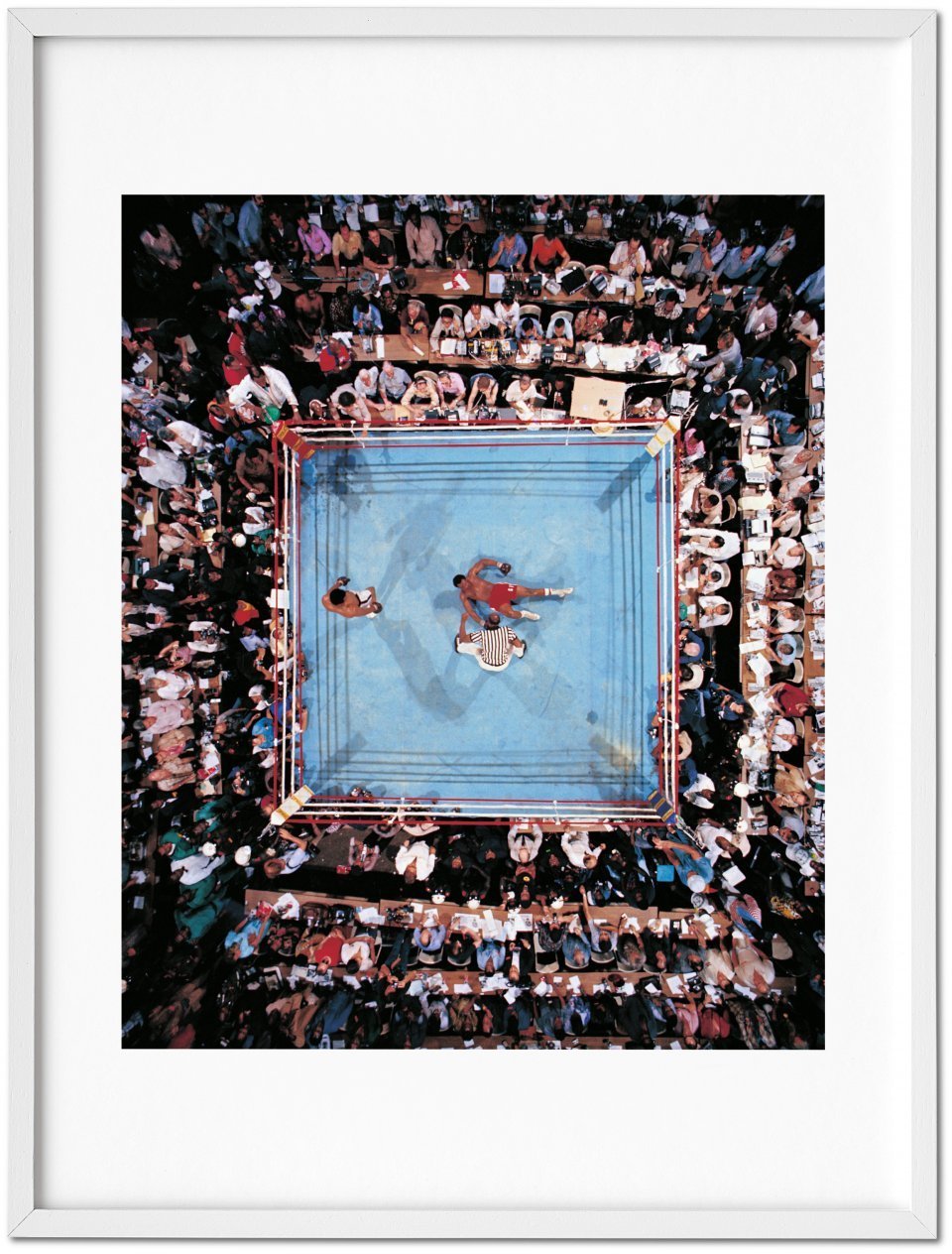 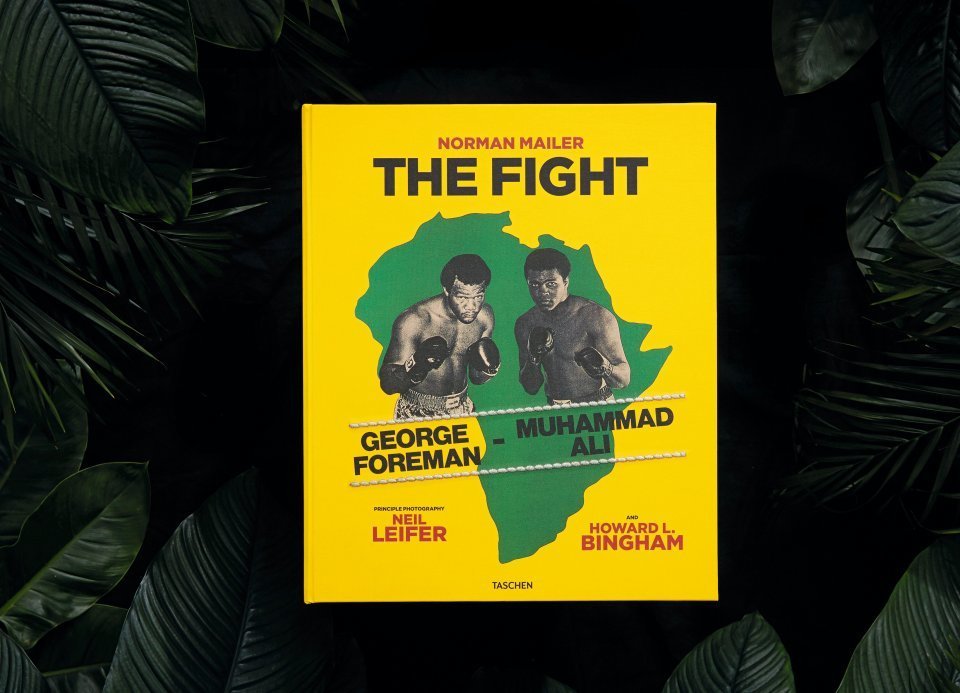 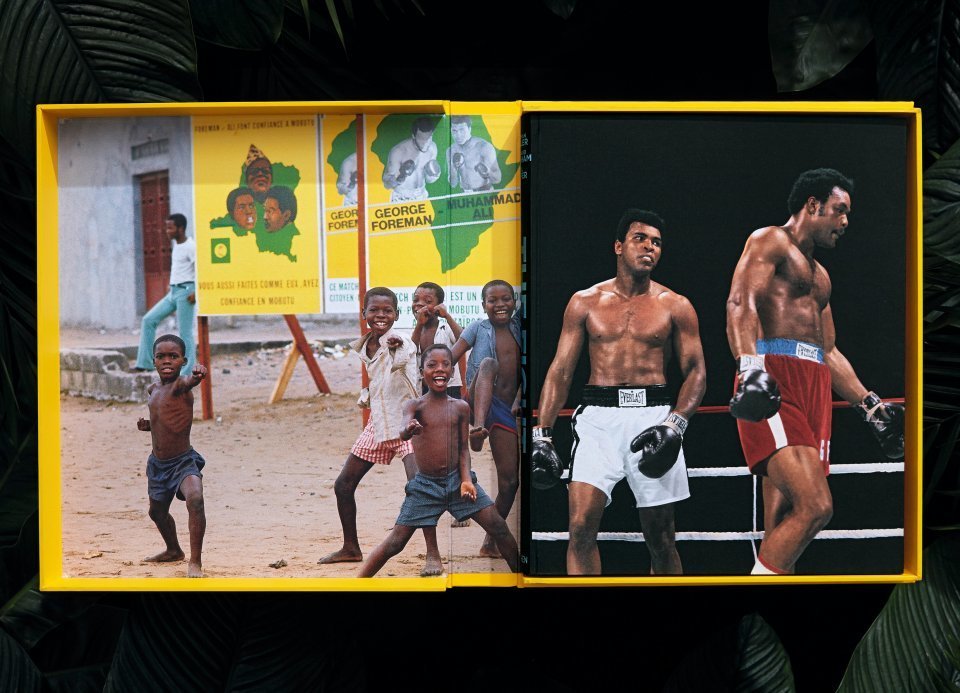 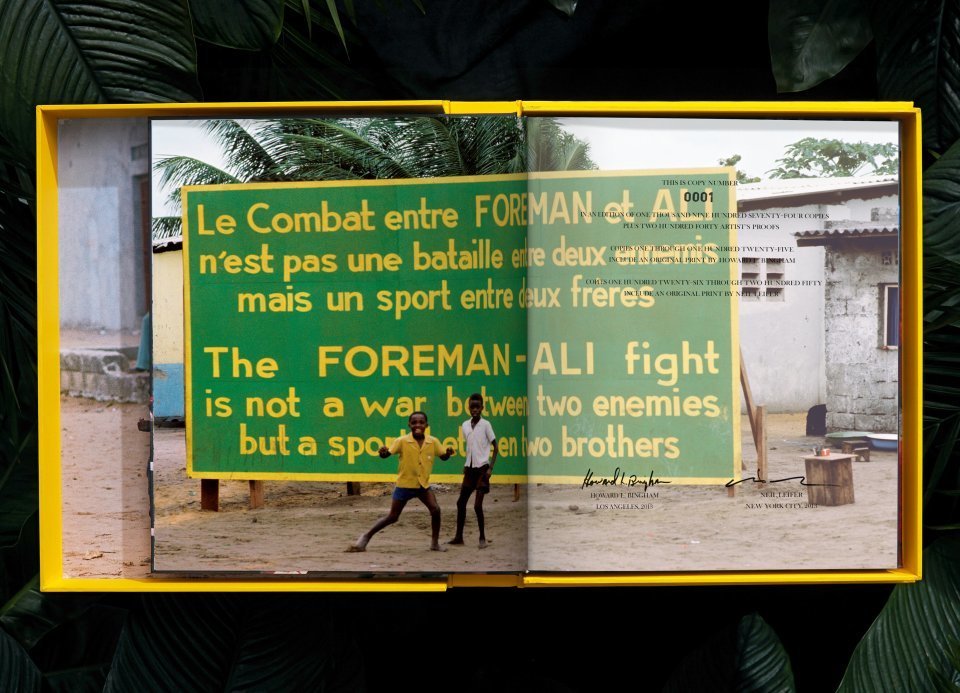 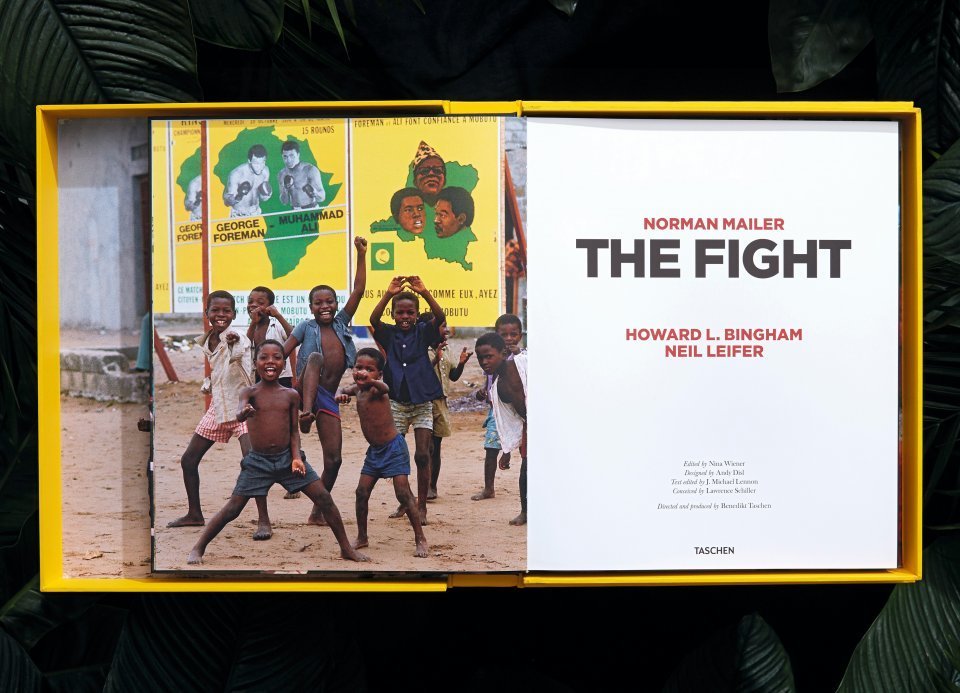 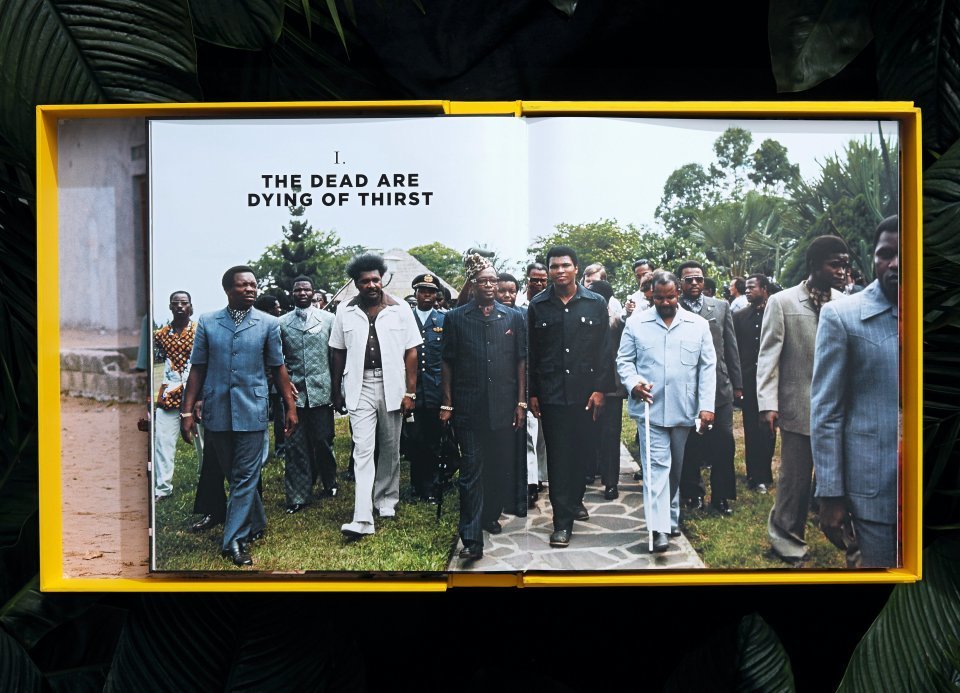 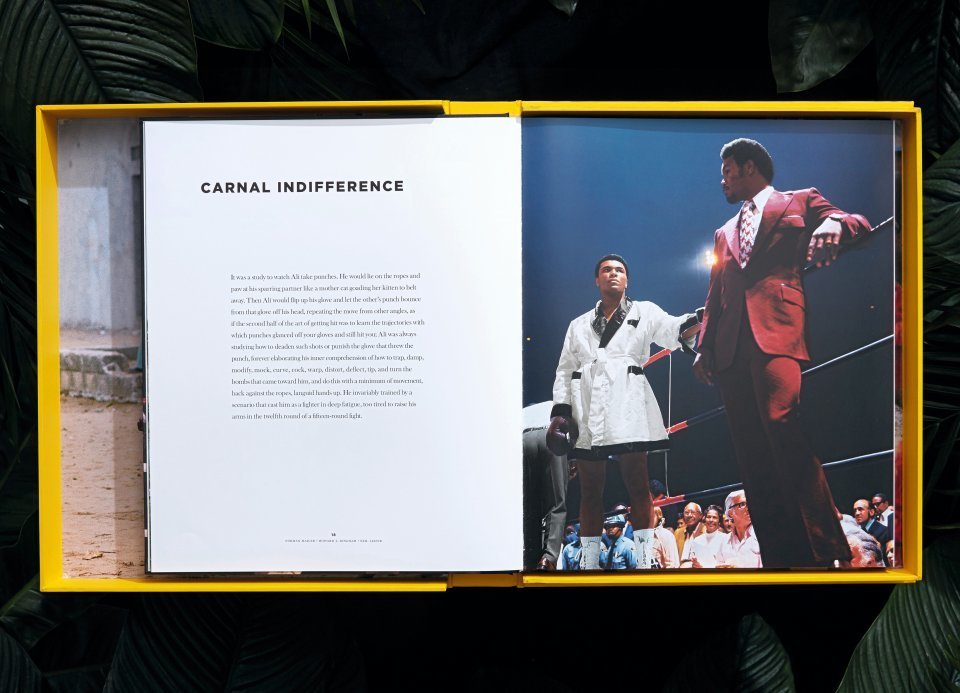 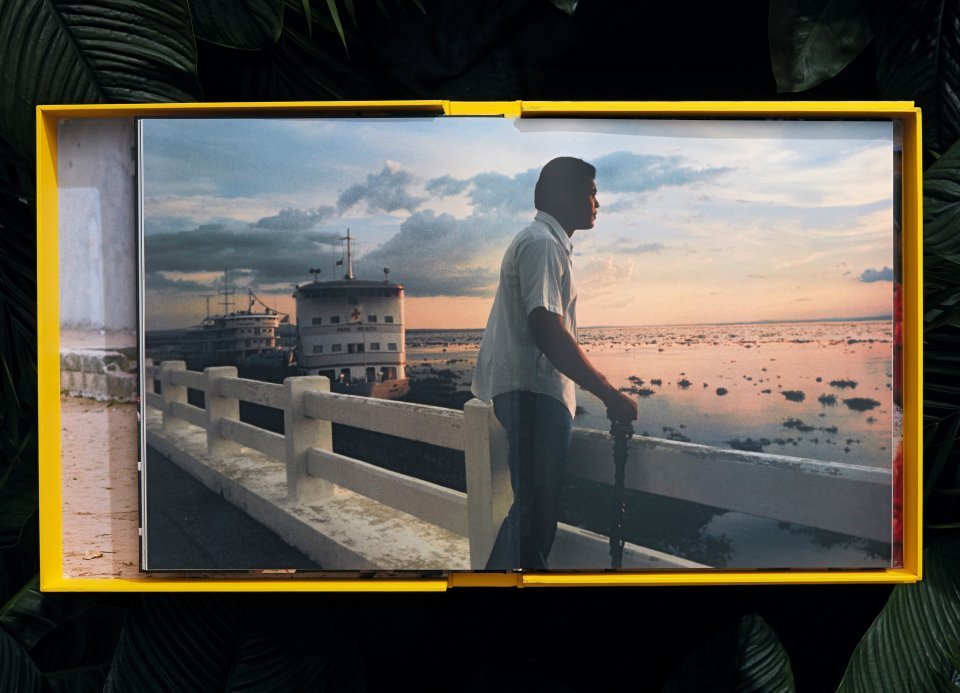 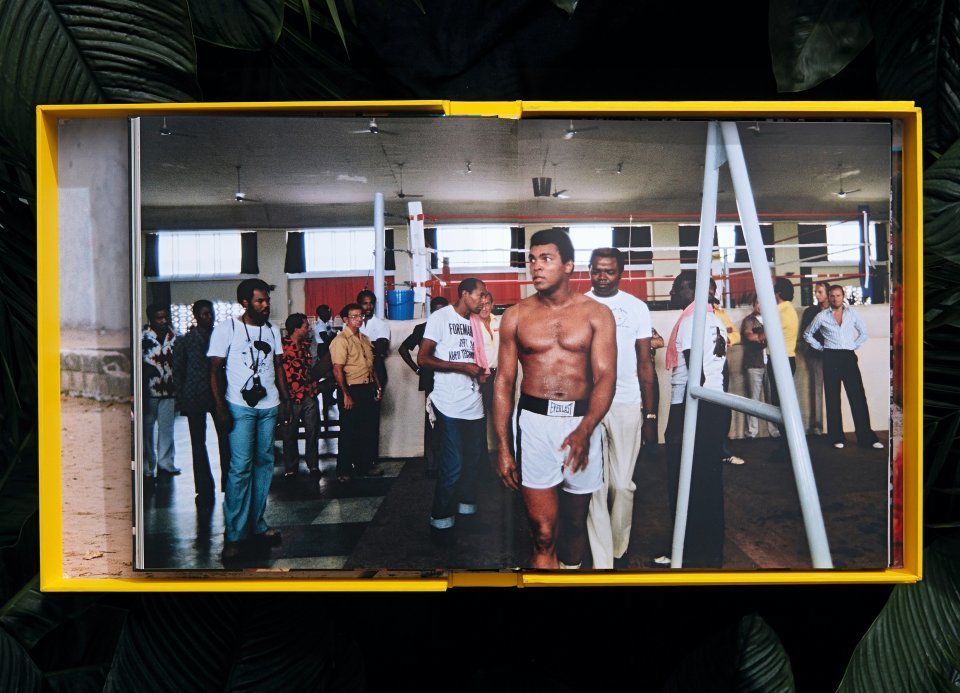 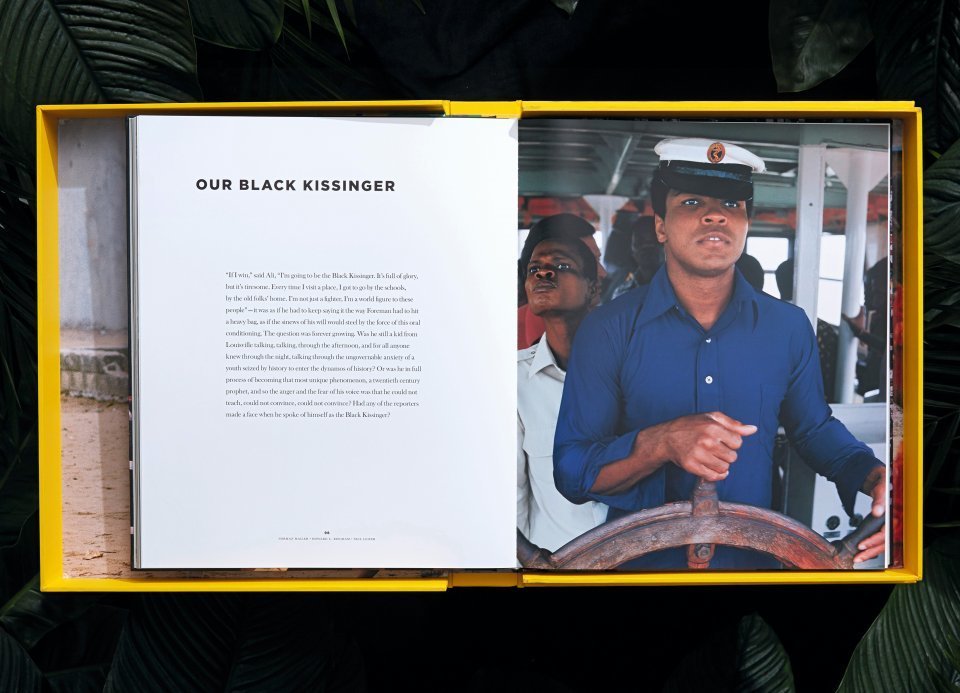 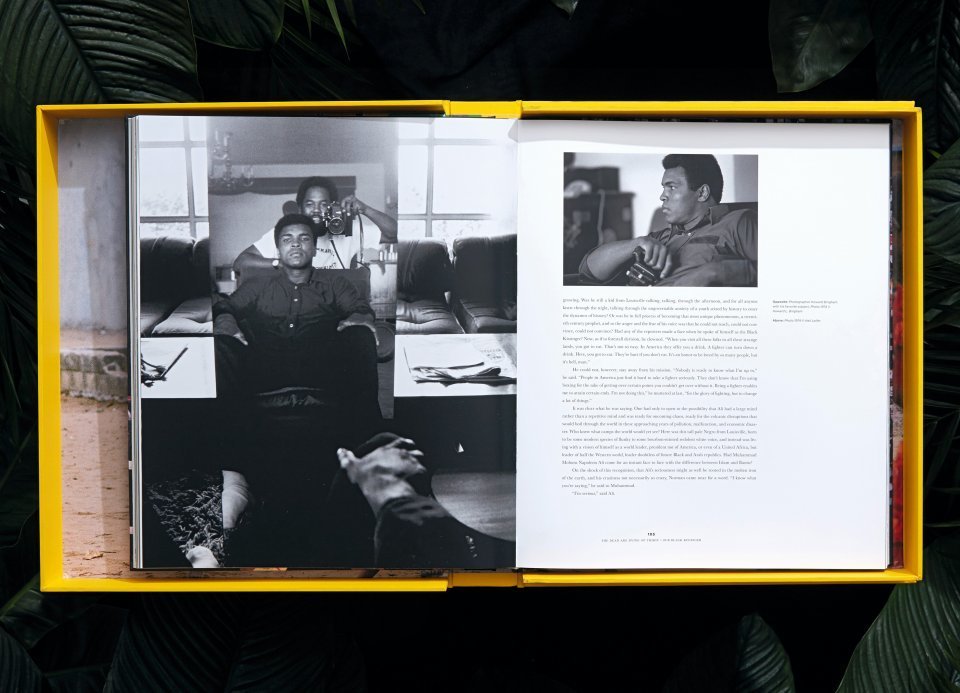 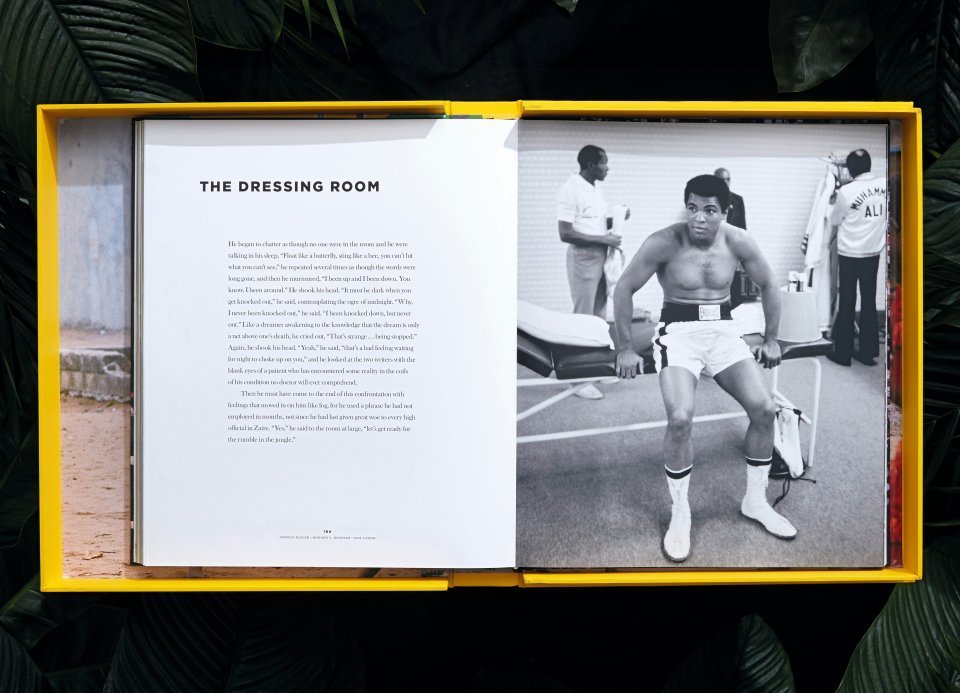 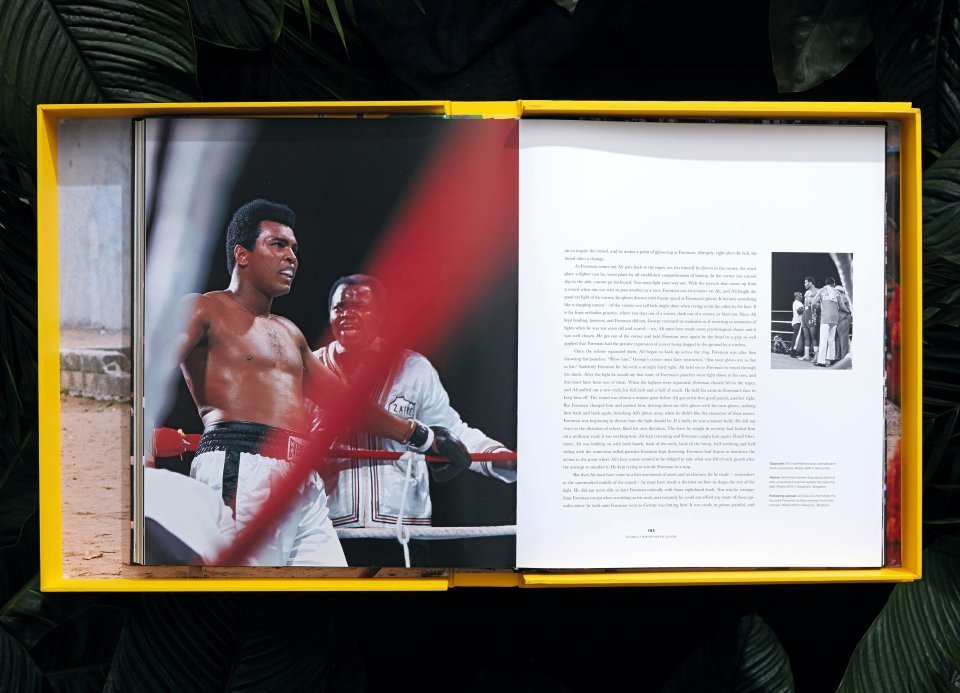 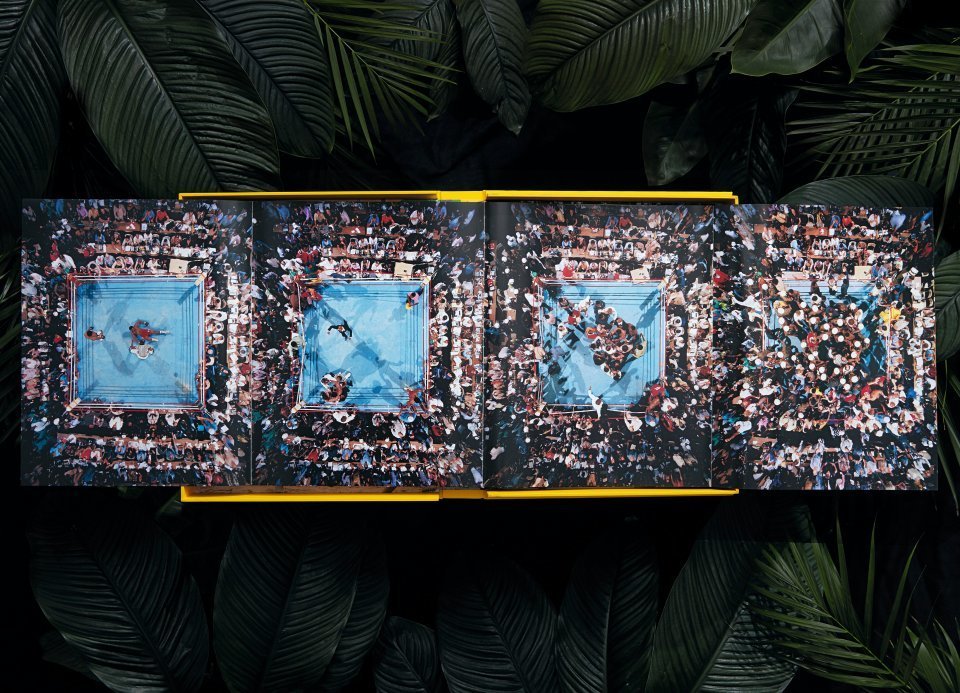 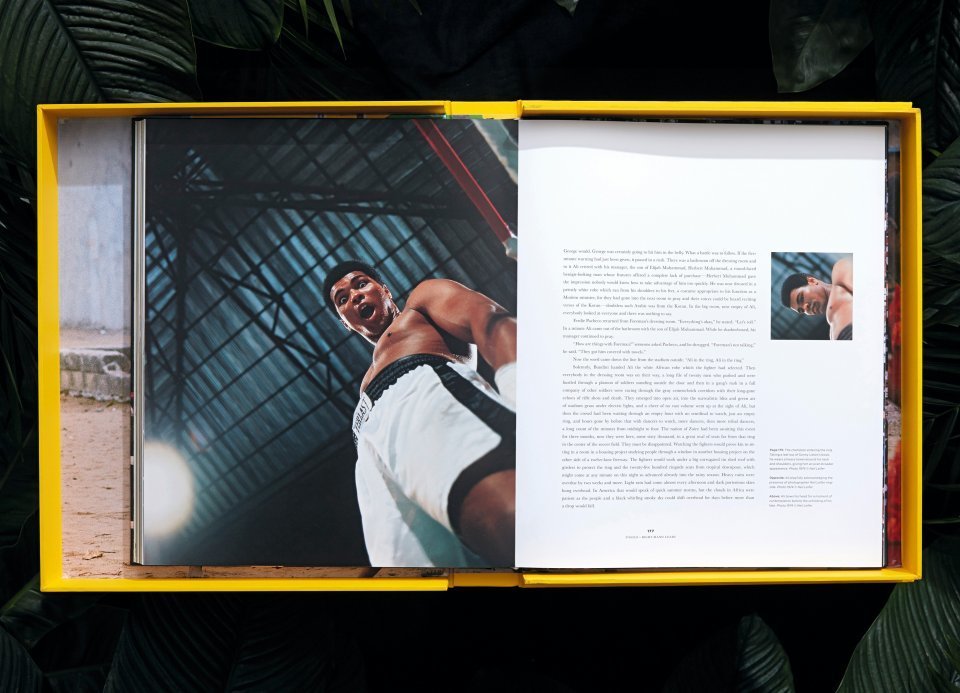 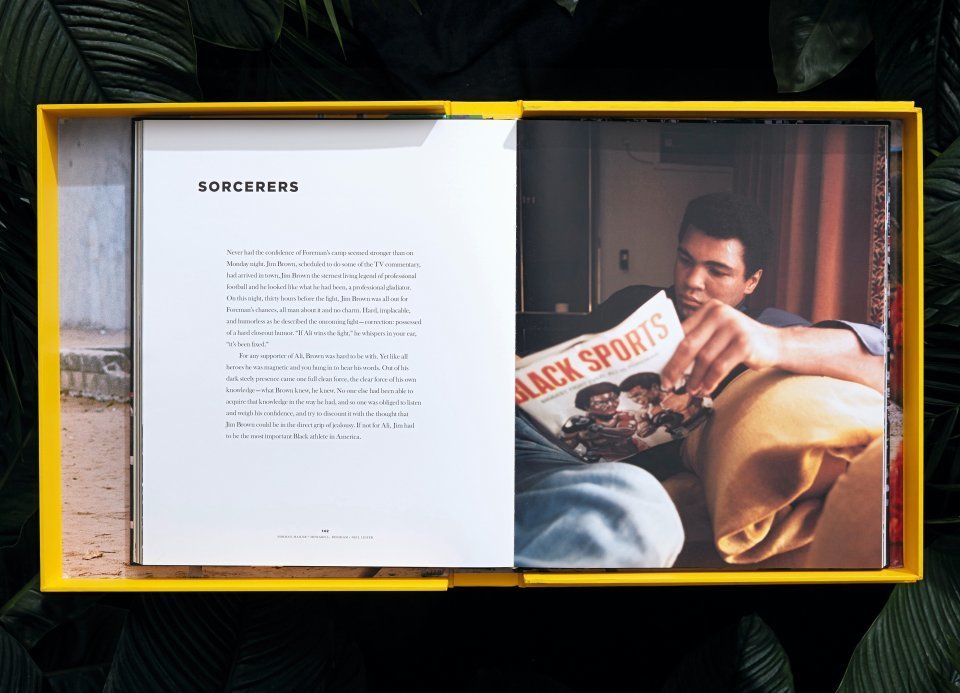 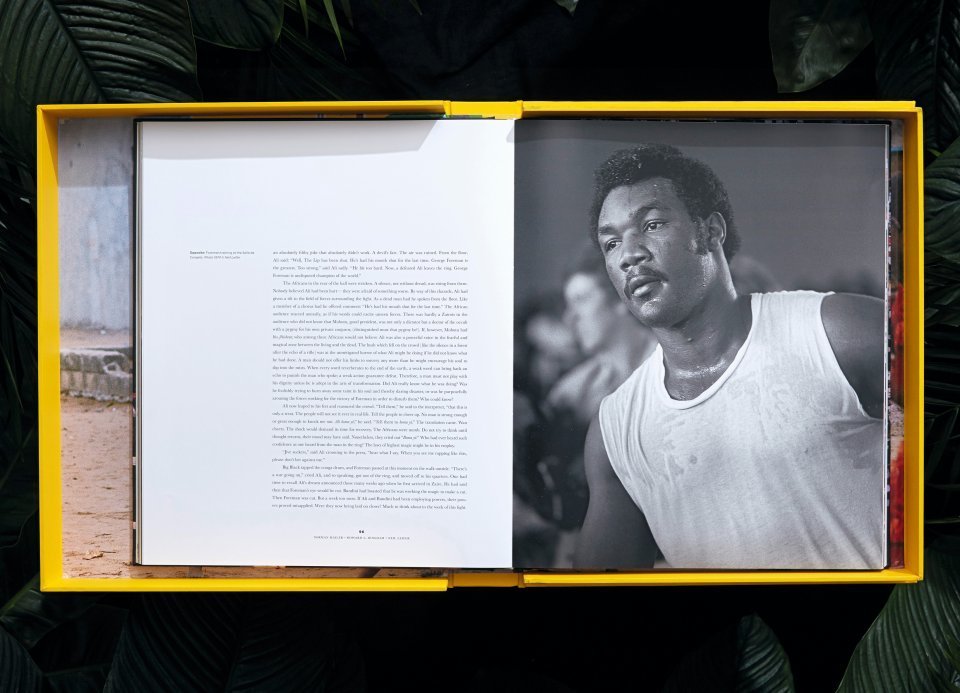 Norman Mailer. The Fight. Art Edition No. 126–250, Neil Leifer ‘Ali vs Foreman – Foreman Being Counted Out’

Edition of 125
Pigment print on Museo Portfolio Rag paper, paper size 11.8 x 15.7 in., hardcover volume with a clamshell box, 14.4 x 17.3 in., 264 pages
US$ 3,000
This edition is sold out. However, occasionally, copies do become available again. Please register on our waiting list so we can inform you if this edition, or anything similar comes up.
This dazzling tribute to Muhammad Ali and George Foreman’s 1974 boxing match in Kinshasa, Zaire, brings together the best of Norman Mailer’s classic commentary The Fight with color and black-and-white photographs from the two men who captured Ali like no one else: Neil Leifer and Howard L. Bingham.

Art Edition (No. 126–250), signed by the two photographers and with a signed pigment print by Neil Leifer, Ali vs Foreman – Foreman Being Counted Out

The Rumble in the Jungle

On October 30, 1974, in Kinshasa, Zaire, at the virtual center of Africa, two African American boxers were paid five million dollars apiece to confront each other in an epic match. One was Muhammad Ali, who vowed to reclaim the championship he had lost. The other was George Foreman, who was as taciturn as Ali was voluble and who kept his hands in his pockets “the way a hunter lays his rifle back into its velvet case.”

Observing them both was New Journalism heavyweight Norman Mailer, whose grasp of the titanic battle’s feints and stratagems—and sensitivity to their deeper symbolism—made his 1975 book, The Fight, a sportswriting classic. Now, 40 years after its first publication, TASCHEN presents the first illustrated edition of Mailer’s masterpiece with a wealth of color and black-and-white photographs by the two men who captured Ali in the ring and in private like no one else: Neil Leifer and Howard L. Bingham.

This Art Edition of 125 copies presents the book with a signed pigment print by Neil Leifer, Ali vs Foreman – Foreman Being Counted Out. Considered by many to be the greatest living sports photographer, Neil Leifer’s technical mastery and tenacious spirit opened the door to nearly any assignment, from the sidelines of Super Bowls to the Olympics. But his favorite subject was and always will be Muhammad Ali.

When he arrived in Kinshasa before this match, Leifer feared the worst for his friend, but ended up capturing one of Ali’s sweetest victories. The bird’s-eye image harkens back to his famous overhead view of Ali’s 1966 knockout of Cleveland Williams, but in Zaire, boxing history is made as the favored Foreman falls. Seven years after being stripped of his title, Muhammad Ali is champion again at 32.

Marking the year of the match, The Fight is limited to 1,974 numbered copies signed by the photographers. Copies No. 126–250 come with a pigment print signed by Neil Leifer: Ali vs Foreman – Foreman Being Counted Out.

Native New Yorker Neil Leifer began photographing sports events as a teenager. Over 160 of his pictures have appeared on the cover of Sports Illustrated and over 40 of his photographs have graced the cover of Time. He has published 17 books, and was one of two principal photographers in TASCHEN’s tribute to Muhammad Ali, GOAT—Greatest Of All Time and the illustrated edition of Norman Mailer’s The Fight.

Norman Mailer. The Fight. Art Edition No. 126–250, Neil Leifer ‘Ali vs Foreman – Foreman Being Counted Out’ 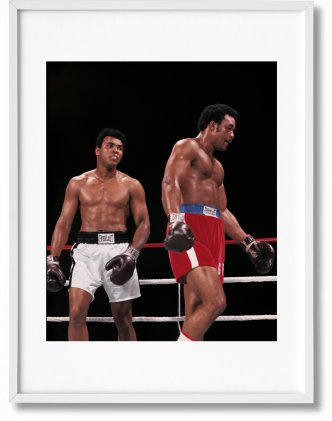 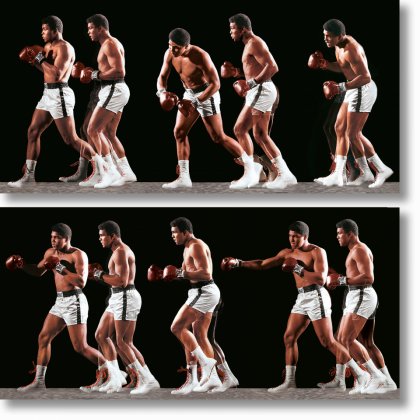 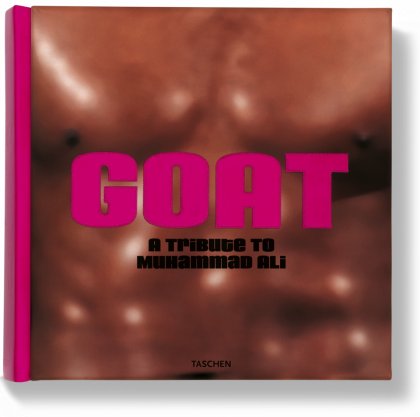 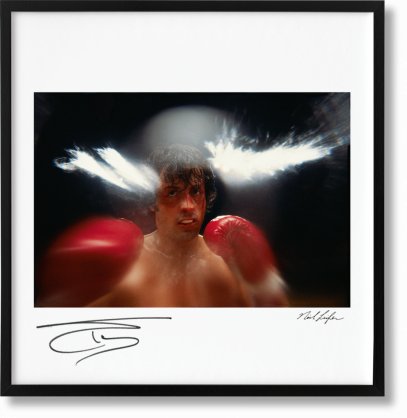 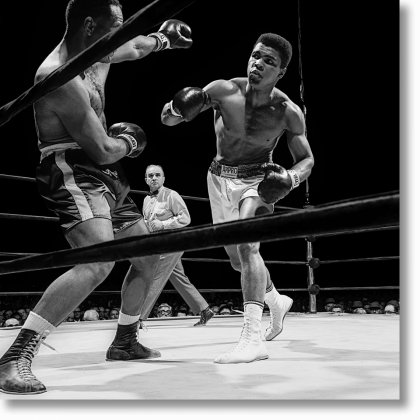 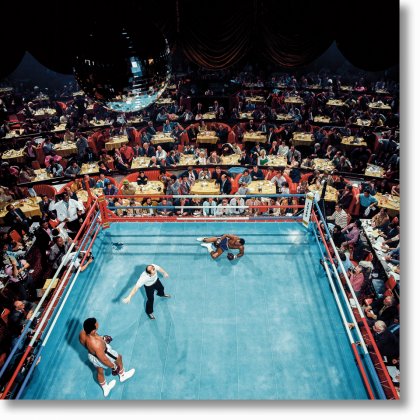 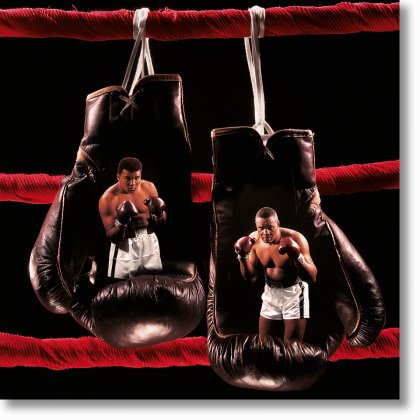 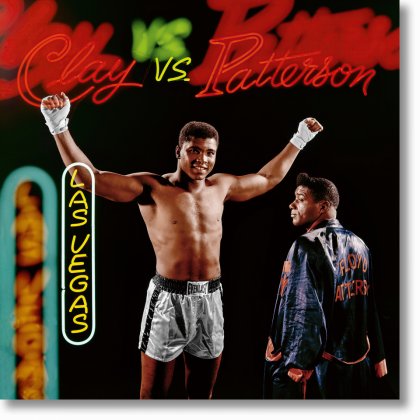 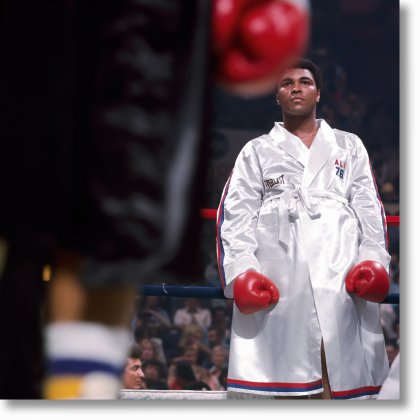 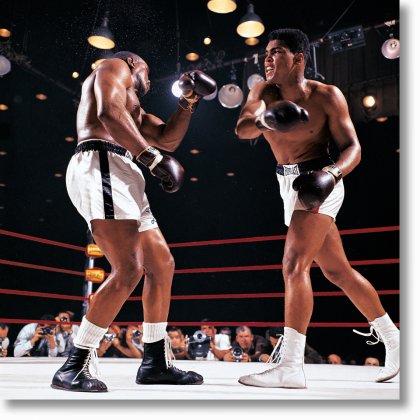 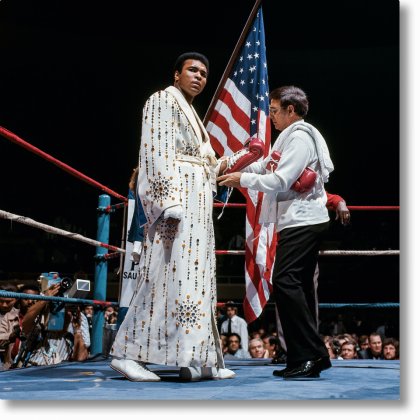