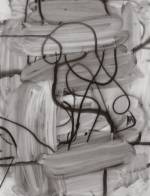 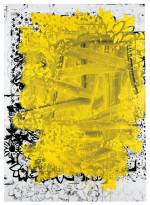 Christopher Wool takes it to the bridge, spanning abstract expressionism and pop, drama and comedy, funk and the sublime. The emblem of his advanced funkiness is his spray squiggle—with all the innocence of an amateur doodle, yet all the stealth of a master brush stroke. That funk is the P-Funk. Fifty years on, Pollock’s paint splash looks very artistic, whereas in its day it was a shocker. But no naked emperor connotations survive. The equivalent shocker today is Wool’s joyous squiggle, a gesture usually associated with impromptu juvenile defacement, obliteration, error. It has a motor-bootiness to it that is guaranteed to produce discomfort in the academically squeamish. That’s street knowledge.

A few years ago a patronizing adult looked at a colorful abstract drawing my five year old son was working on and said,“Oh, that’s really good! Is it a house?”My son looked the questioner over skeptically and said, “It’s a scribble!”

But look at how free it is, a scribble. Look at how that sprayed line seems to have a mind of its own, or is it a mindlessness of its own? It’s the arm aspiring to freedom in randomness, dowsing a psychic magnetic field, making tracks to a secret place where the artist is as natural as a praying mantis, thought and feeling united.

Graffiti is the human signature of the city. Graffiti is never abstract, but sometimes the lettering is very abstracted, pushing legibility to the limit. At the height of New York’s “wild style” movement, with its heavily decorated letters (or armed letters, as Rammellzee would put it), readability was trumped by graphic spectacle. I recall taking an Amtrak train to Philadelphia, where the tracks into the city, particularly near the North Philadelphia station, passed through a desolate postindustrial slum with weird fields of graffiti that seemed almost like an alien alphabet. It was genuinely ill. It looked like Chinese ideograms on angel dust. I don’t know what physical cues Wool provides himself when composing a sprayed line, but the results can be as strange and unsettling as those Philly tags. Sometimes his line is easy and loopy and partakes of the innocence of childlike doodling, but other times it is uneasy, tense, and ill.

The word paintings are hard edge on the edge. It’s not reductio ad absurdum or a send up. It’s painting with attitude. It’s not exactly Robert Ryman with found lyrics, or Ad Reinhardt meets concrete poetry, but it’s up that alley. It is minimal in its self-defined context, painted words stripped down to the primer. It is abstraction of language itself, but it’s also about the tension running along the thin line between mass production and the personal hand. It’s about the aura of the stencil, about energy radiating and splashing from the confines of the character. It’s sign-painting with feedback.

All the innocence of an amateur doodle, yet all the stealth of a master brush stroke

The chosen words and phrases are All-American mantras. Sometimes they are clichés that become knucklehead koans, idiot ideograms. They may be chunks of conventional wisdom, common knowledge, or cultural default settings, but in every case, upon reflection, they open up to new shades of meaning. They are compressed and concentrated info that, like anything used without deliberation, anything mass-produced, serves as host to parasitical ironies. Their composition on the canvas or page or slab puts them under a philological microscope.

Sometimes, if you look at a word long enough, it stops making sense. And then you can start over again with it. We deconstruct the word and the letter and the phrase by contemplating it in skewed order, instinctively going for Scrabble logic and buried communiqués.Wool deconstructs words and de-contextualizes phrases by stacking letters at faux random. The process generates calligraphic effects, acrostic reverb, and a kind of Rubik’s cubism of meaning. It’s about the meeting point between the machine and hand work, between formula and expression. There are no answers here, only good questions about how characters and words work. Or not.

Unlike the swaggering abstractionists of the fifties, the purist painters,Wool doesn’t disassociate his paintings from at least a metaphoric relationship to the world. There’s a street-smart quality to his esthetic. He’s a connoisseur of chaos and a cartographer of disorder. His photographs lay out a vision of apocalyptic entropy: graffiti on graffiti, vagrant dogs, wrecked chassis, scary spills, and the abstract expressionism of blood, urine, and motor oil, the gleam of trash in plastic bags, toxic stains, and demented detritus. Here’s the flotsam of Office Depot farce and the jetsam of the studio apartment tragedy, a world of dreams put out on the curb and waiting to be hauled off and given a decent or at least ecologically correct burial. But even absent of image, there’s true grit in the sub-stratum, in the subiconography of the work.

Jean-Michel Basquiat loved the do-it-yourself bilingual bricolage esthetic of Alphabet City, the district of improvisational bootstrap enterprise.Wool, another far- Eastsider, has a similar romance with fringe New York, the no man’s land, the interzone, the DMZ, and the ruins of concrete jungle.Where Basquiat gleaned pop cues from that world,Wool finds an alphabet of symbolic abstractions. Here is the action painting of the unconscious— accidental splashes and streaks that mark fields of blighted architecture. The over-painting of his large canvases resembles nothing more than the amateur abstract paintings that are the whitewashed windows of empty storefronts.

Wool’s swirling squiggles ride the canvas with fraught exhilaration. Sometimes his knotted lines seem loopy and comic, other times they are furious or tense.When they accrete they look like cross outs, negations, but what they are crossing out is often blankness itself. They are crossing out nothing. Usually they avoid the edge, marking territory with animal energy, like a dog on a pissing marathon, extending proprietary redolence over the full scope of available space. I fuck this space up therefore I own it.
Teilen
share twitter