The making of magic

How Stanley Kubrick revolutionized science fiction and the art of cinema

Shooting the final scenes of 2oo1 in the faux-luxurious bedroom. The underfloor lighting made the room uncomfortably hot. Critics and audiences alike argue about the meaning of this room. Is it a comfortable cage constructed by the aliens, and based on their observations of Earth, or does the decor spring from Bowman’s hallucinatory ideas of what an expensive hotel room should look like?

New American Library’s first hardback edition of Clarke’s novel, based on the screenplay co-written with Kubrick, was published in June 1968, two months after the film’s initial release. 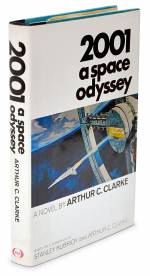 The Honeywell company designed a briefcase for Heywood Floyd. It contains all the components of a modern laptop computer: a keyboard, a camera, an electronic stylus pen, a modem, a digital file storage module, and a display screen. 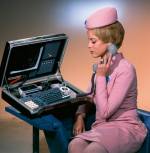 Kubrick and Clarke pose for publicity photographs inside the passenger deck set of the Aries lunar ferry. Clarke’s suit is crisply pressed for the occasion, while Kubrick’s clothes, as usual, are worn carelessly. 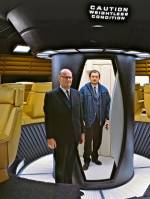 An experimental photo of Dullea in his space suit, contrasted with the unsuccessful makeup test for a primordial human. Kubrick’s 2001 is a story of evolution from a “primitive” to an “advanced” species. In shedding our fearful and uncertain animal origins, and adopting a cool, organized technological
culture, do we lose as much as we gain? 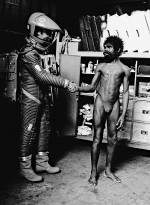 One of several Mitchell cameras adapted to handle two reels of film simultaneously in order to accomplish matte work. 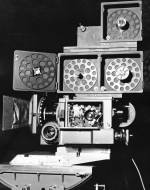 Oliver Rennert’s artwork shows the general layout of the front projection system. From the camera’s point of view, the man-ape actor precisely masks his own shadow on the screen behind him.

Kubrick gives instructions through a hatch at the “bottom” of the centrifuge, as Dullea and Lockwood prepare for a scene. 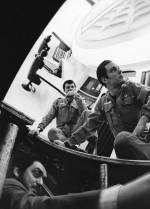 50 years of deep space exploration
A cinematic odyssey into the future of man, unequaled in effort and execution

In the spring of 1964 Stanley Kubrick set out to make what he called “the proverbial good science fiction movie.” The Making of Stanley Kubrick’s ‘2oo1: A Space Odyssey’ marks the 50th anniversary of the moment when Stanley and his co-screen writer, noted futurist Arthur C. Clarke, first sat down to brainstorm one of the greatest landmarks in the history of cinema.

Created with the collaboration of the Kubrick family and Warner Bros., this book includes unique concept artworks and behind-the-scenes photographs, many of them never previously published. The extensive text draws, also, from direct interviews with Arthur Clarke, and the principal actors, senior production designers, and key special effects experts who helped to realize Kubrick’s futuristic vision.

Stanley’s brother-in-law Jan Harlan explains the genesis of the Kubrick family’s latest collaboration with TASCHEN. “Piers Bizony had published an essay on 2oo1 some years ago—a simple paperback— but it demonstrated that he is genuinely knowledgeable about this film and the thinking behind its creation. Other partners in the project were, of course, essential. From the start, in proposing this new book, and indeed, throughout the writing and production process, we worked very closely with Warner Bros.”

Of course the Kubrick family has worked with TASCHEN before, as Jan explains. “The Stanley Kubrick Archives project led directly to the next book, about Stanley’s great, unrealized project. TASCHEN called it Stanley Kubrick’s Napoleon. The Greatest Movie Never Made and I don’t think they exaggerated. Napoleon is not just a historical figure. His genius and folly, his charisma and poor judgment, his brilliance hampered by vanity and ego, are elements relevant for our leadership today around the globe.”

In 2oo1 Kubrick suggests that intelligent machines might also become capable of expressing such Napoleonic qualities as brilliance, ego and vanity. There is very little dialogue in this epic space film.

Kubrick’s ambitious philosophical speculations are conveyed by his unforgettable imagery. The destinies of prehistoric manapes are intertwined across millions of years with those of computers, humans and alien entities whose nature and intentions are thrillingly ambiguous. So many space fiction films become dated almost as soon as they are made. In contrast, 2oo1 is just as compelling as when it was first screened, especially given the fact that NASA space probes have discovered countless new planets in our galaxy. The search for extraterrestrial intelligence is a very real and active science today. 2oo1’s visual effects established groundbreaking standards for excellence.

Kubrick and his crew built, from scratch, special projectors, automatic animation systems and motorized camera rigs controlled by banks of electronic switches and timers. But some of the grandest effects were also the simplest. Christiane remembers working alongside her husband on early experiments back in 1964. “Stanley was messing around with paints suspended in chemicals—and I was involved in the art department, too—sometimes it was very smelly, very uncomfortable, and your eyes would run because of the fumes. And people would say, ‘This is crazy!’ But inside these little glass containers, the laws of nature applied to the liquids just as they apply to the universe as a whole.

Stanley saw this, and some of the results from those first experiments are actually included, vastly magnified by the camera, as the exploding galaxies and swirls of cosmic dust in the final version of 2oo1.”

Kubrick was renowned as an obsessive and relentlessly hard-working director. His legendary attention to detail certainly helps explain why 2oo1 still looks so crisp and believable today. But the typical outsider’s image of her husband as a workaholic is not one that Christiane understands. “To Stanley, and I suppose to any artist, working is more like playing, because what you do is also what you enjoy. Always there is enthusiasm, an open mind to limitless possibilities, and then you narrow it down to what will actually work.”

Jan says, “This of course is what Stanley’s film is all about—limitless possibilities.” Jan and Christiane are delighted to share the story of how 2oo1: A Space Odyssey was created, both from a technical standpoint and in terms of the early scripting process. The deeper meaning of the film, however, is something that Kubrick always wanted to let his audiences explore without the guidance of mere words. As he explained in 1968, when the film was first released, 2001 was “essentially a nonverbal experience” designed “to communicate more to the subconscious than to the intellect.” This book describes, in compelling detail, how he set out to achieve this.

The rest is up to you, the audience.